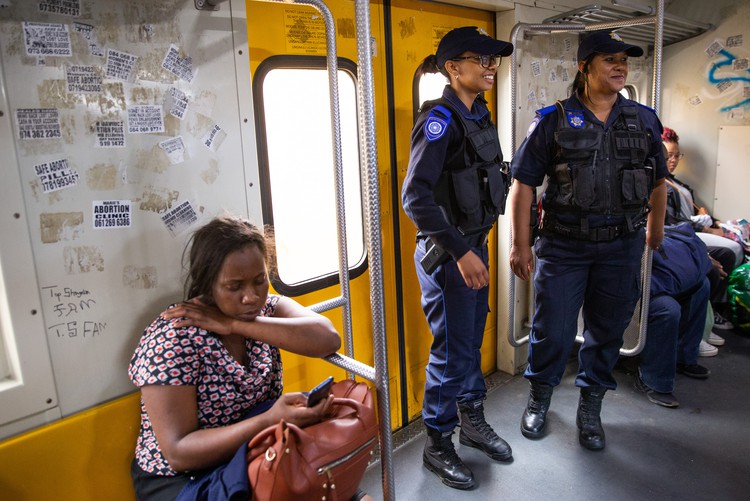 On Monday, officers of the new Rail Enforcement Unit were deployed on trains in Cape Town. Photo: Ashraf Hendricks

The unit is a joint initiative between the City of Cape Town, the Passenger Rail Agency of South Africa, and the Western Cape Government. It has funding of R47.9 million to operate for the next 12 months.

MEC for Transport and Public Works Donald Grant, addressing the officers at a ceremony on Monday to introduce the unit to the public, said, “The unit will focus on commuter safety as well as vandalism and theft of crucial Metrorail infrastructure.”

Mayoral Committee Member for Transport Brett Herron said the officers will be armed. He told GroundUp, “The unit is solely dedicated to the rail service to fight crime and vandalism and to protect the rail infrastructure. Their daily duties will include being visible on trains, patrolling train to train, and line to line. The commuters will see them.”

“Some years back, for five years, Cape Town Metrorail was among the best. But it has deteriorated very rapidly in 2015, starting with the burning of trains, over and above the vandalism of trains, stealing of copper and so on,” said Nzimande.

“Law enforcement is necessary but not sufficient; communities have to come to the party,” he said.

Spokesperson for civil society organisation Public Transport Voice Dalton Ndongeni said, “We welcome the Rail Enforcement Unit, as long as it addresses the challenges of commuter safety, especially in the Central Line stations like Nolungile, Nonkqubela, where people have to wait for the train outside the station as they fear for their lives.”

Nokwanda Lubanzi, a commuter who uses the Nonkqubela station told GroundUp: “I take a train from Nonkqubela Station to Cape Town station five days a week with my two children. I always fear that one day they would be pushed out of a moving train, as people exit while the train is still in motion and [it’s] always crowded.”