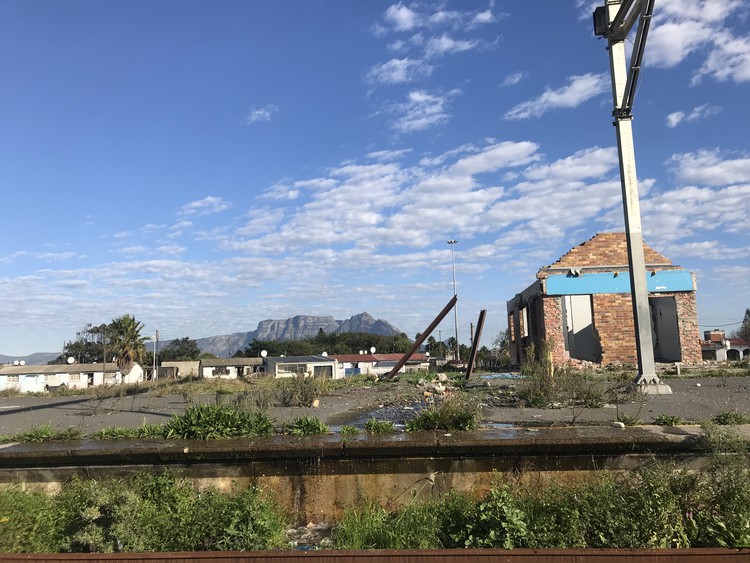 The Netreg train station has been vandalised extensively since the suspension of services on the Central Line. Photo: Tariro Washinyira

A vandalised building without doors, windows or a roof, surrounded by rubble, overgrown shrubbery and railway tracks without overhead cables is all that remains of the train station in Netreg, Cape Town.

A recent oversight visit by the Democratic Alliance (DA) Shadow Minister of Transport, Chris Hunsinger, accompanied by Felicity Purchase, the City’s Mayco Member for Transport, and Ward Councillor Angus Mckenzie highlighted the derelict state of the railway station in Kalksteenfontein.

Following the visit last week, GroundUp sent questions to Metrorail spokesperson Riana Scott who promised to respond but is yet to do so. The article may be updated with her response.

Khayelitsha, Mitchells Plain, Nyanga and Bonteheuwel trains on the Central line to Cape Town were suspended in January 2018 because of cable theft and vandalism.

In a statement last week the DA delegation said, “The purpose of the oversight is to examine the extent of the damages that the national government’s neglect has caused on the Western Cape’s busiest line, the central line, and how this impacts on residents’ access to transport.”

“Cape Town’s rail services have collapsed completely due to perpetual cable theft, land invasions and vandalism as a result of a lack of proper oversight by PRASA and the government. The situation was further worsened during the extended Covid-19 lockdown. Local communities and thousands of commuters have now been left stranded and forced to spend more money on alternative transport.”

Netreg station’s main building on the platform has been stripped of its roof, doors, windows. Pipes are leaking. Inside, debris was lying on the floor of the area previously used as a cash office which was charred. Cables and copper wires along the railway line have been stolen.

Purchase told GroundUp that they visited Netreg station last year and wanted to assess whether any progress had been made. But, she said, the station was in a worse state than ever.

Mckenzie said that despite President Cyril Ramaphosa’s announcement of an investment of R2.8-billion to refurbish the central line in the Western Cape and the Mabopane line in Pretoria during his 2020 state of the nation address, not much had been done about the resumption of services on the Central Line.

Mckenzie claimed that it would take more than R1.4 billion to fix Netreg station. “Many people are spending their disposable income on travelling with other forms of public transport when rail is in fact the backbone of a thriving economy of the city,” he said.

Sonja Carstens from the United National Transport Union (UNTU) said that there was no political will from the government, especially President Ramaphosa, to find solutions so that PRASA can focus on providing safe and reliable passenger rail services to the poor and working class.

“There have been no upgrades or progress in reviving the Central Line in Cape Town or on the Mabopane railway line north of Pretoria as promised by President Ramaphosa. In fact both railway corridors have been severely damaged during the lockdown period to such an extent that some parts are considered to be completely ruined,” said Carstens. 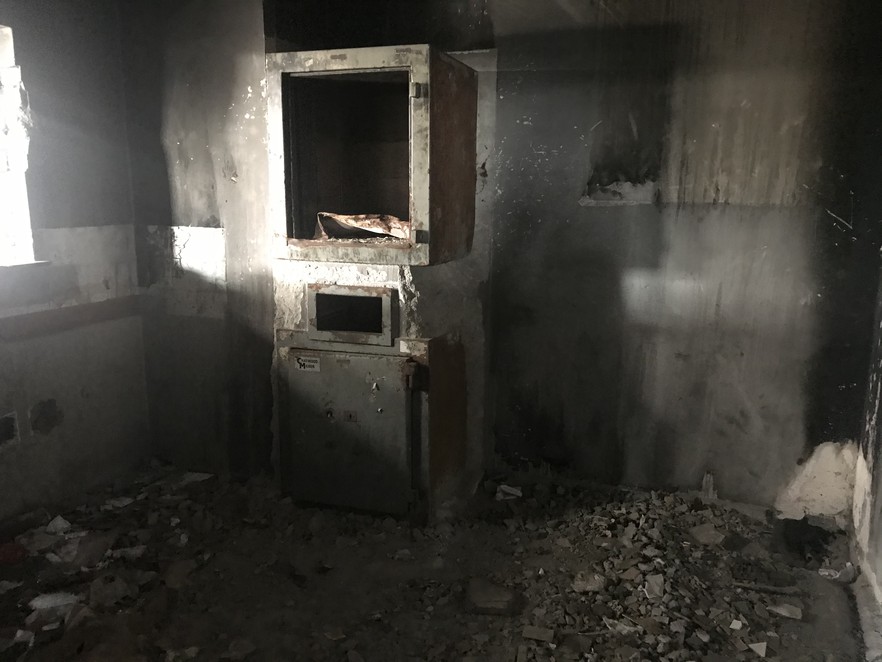 The inside of the cash office at Netreg station has be ransacked by vandals and appears to have been burnt down as well. Photo: Tariro Washinyira

Neighbourhood Watch member Christine Erasmus has lived in Kalksteenfontein for 40 years. She said that what was once a “vibrant and beautiful station” had turned into “the worst station in Cape Town due to vandalism”. She has just joined PRASA to do voluntary patrols in surrounding areas such as Langa, Belhar, Bishop Lavis, Bonteheuwel and Netreg for a monthly stipend of R1,800.

“Since the train service stopped operating on the Central Line, many people from this community are struggling to get to work and have lost their jobs because they don’t have transport money. Weekly train tickets were R52 and a monthly R200 to Cape Town but now a weekly bus ticket to Cape Town costs R152. Many people prefer to use taxis but they now take two taxis to reach Cape Town. It’s R12 for a taxi to Elsies River, then they get another taxi for R13 to Cape Town. A straight bus is R22 one way, R44 two way,” she said.

Erasmus said that people did not understand the impact of vandalising and stealing cables. “There is too much hunger in this community. Many people lost their jobs during lockdown.”

JP Smith, Mayco Member for Safety and Security on Monday said that the Rail Enforcement Unit (REU) set up to assist PRASA was closed on 30 June 2020. “As per the funding agreement between the PRASA, the Western Cape Department of Transport and Public Works, and the City of Cape Town. Until then the REU was fully operational and recorded many successes.”

Smith believes that if the REU had still been active “we would have been able to reduce the level of vandalism that PRASA has been subjected to as we were affecting a consistently high number of arrests” during the period that the unit operated.

GroundUp contacted acting presidency spokesperson Tyrone Seale on Monday to ask what the presidency has done to ensure that trains resume. We are yet to get a response.