Parents requested to boil water for children to bring to school 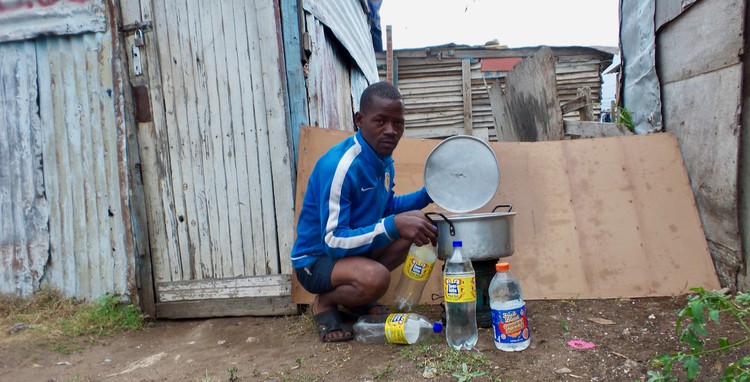 Matewo Munemo, of Powerline informal settlement in Motherwell, boiling water outside his shack. He stores the water in empty plastic bottles at his friend’s house. Photo: Joseph Chirume

The Nelson Mandela Bay Municipality is encouraging its residents to boil drinking water before consuming it. But poor residents say they do not have money to pay for extra electricity and paraffin to boil water. They say the municipality must provide clean tap or bottled water.

On Monday the municipality said that “tests have shown a deterioration in our water quality” and that “certain microbiological limits were exceeded”. The municipality promised to provide more details by the next day but we can find no other statements on Gqeberha’s water crisis on the municipality website since then.

“We are now paying the price of poor management and corruption,” grumbled a resident from Algoa Park who did not want to be named.

Some primary schools, such as GJ Louw Primary in Schauderville, have sent letters to parents urging them to boil water for their children to bring to school.

“The school will try its best to boil water to ensure the foundation phase learners have safe water. The senior classes have to bring their boiled water,” the school wrote.

The school is using its large pots for the school nutrition programme to boil water for its junior grades.

“We know that some parents don’t have enough money to buy electricity tokens or paraffin but we humbly appeal to them to prioritise the health of their children,” a staff member said.

Moreblessing Shai, a hawker at Kenako Mall, Struandale, lives in Missionvale with her three children. She said she is confused by the municipal messaging about putting bleach in water and how much to use. She said she is going to do her best to buy bottled water.

Municipal Acting Director of Infrastructure and Engineering Joseph Tsatsire said at a media briefing that water quality is a challenge when dam levels are so low. Combined dam capacity is at 18%.

He said, “Time and again one has to change the chemical composition for use to be able to manage the quality output at the end of day.”

“We are attending to the problem around the quality of drinking water as a matter of urgency,” she said.