“I may not be employed but I will never let my children and me starve.” 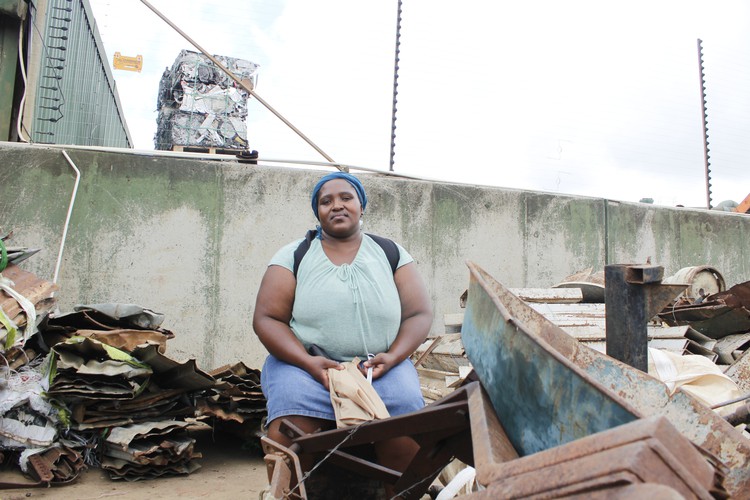 Nelisa Pambane is one of the first in line with her heap of scrap metal to sell to a recycler in Isipingo, KwaZulu-Natal where many collectors opt to sell. Photo: Nomfundo Xolo

Nelisa Pambane sits next to a heap of scrap metal at sunrise waiting for the gates of a recycling company in Durban to open. She has just made the five hour trip from Engcobo in the Transkei with a group of scrap metal collectors. A truck brings them here every two months. “I have sacrificed all my money hoping it will pay off.”

Pambane, 42, has been selling scrap metal for seven years and has been unemployed since 2008. “After the death of my husband, I had no choice but to find ways to feed my family,” she says. “Coming from a rural area I realised finding a job would take me a lifetime. That is when I decided to sell chips at a primary school.”

She also sold cooked meals at taxi ranks and used the money she made to pay the R1,000 for her trip to Durban. “I worked tirelessly but I remained determined. Here I am today, hopeful that after these gates open I will be smiling.”

Pambane says although she has been selling scrap metal in Engcobo for years, she recently discovered that she could make more selling it in Durban. “All along I did not know that I could get double the money for these metals. One of the woman who also sells chips at school told me about how they all get together and divide the profit they make.” This is her first trip with the group.

Calm and welcoming in her manner, Pambane tries to hide her grief with a smile. While talking she keeps a cautious eye on her heap of scrap metal. She says collecting scrap metal in Engcobo is difficult: “Homes in my area are kilometres apart and so after you’ve found the metals you need to arrange transport because they are heavy. You can try carry some of it but then it will take you the entire day.”

Pambane has six children. Her youngest is currently in matric. She says this motivates her. “I cannot let my daughter down. I cannot just sit and wait for a miracle to save us. My daughter needs to see me as an example of hard work and I want to be able to send her to university. That would be my proudest moment.”

She says although selling scrap metal is not a regular source of income, it will help support her family. “It has not been easy. Not having a stable job or any income and single-heading a family is not something any woman wishes for. Many of families in the rural areas are led by single mothers who have to think of new ideas to feed their families.”

“Many times I’ve contemplated death when I am unable to cope. I have nobody to financially assist me,” says Pambane. “I may not have employment but I will never let my children and me starve.”