“Here I get to relax and not think about my problems” 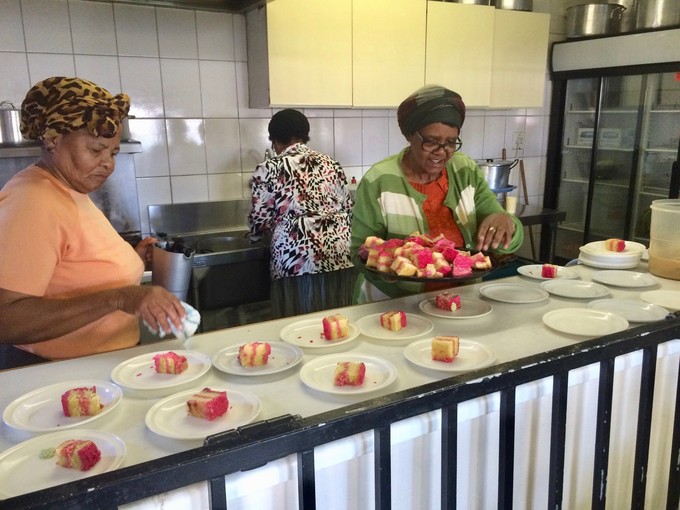 By Zoe Schaver and Thembela Ntongana

Muriel Sikkot is turning 85 and she’s having pink and white cake with her friends. Since 1997, she has been a member of the Khayelitsha social club run by Neighbourhood Old Age Homes (NOAH). Every day, club members get exercise, two meals, the chance to make a small income through soapmaking or sewing, and plenty of company.

Through the club, Sikkot has become an exercise guru – guiding club members on weekday mornings to stretch and to do posture and weight-loss exercises.

“It keeps them fit, wakes them up and gives them a good appetite,” she says.

She takes each person’s blood pressure before beginning exercise to make sure everyone is up to the exertion.

Bikani Wadi, newer to the club and only in his 70s, says he lost the feeling in his left side after a stroke.

“I never thought that I would be able to use my left side again, but because of the exercises that they make us do every time we come here, I now can,” says Wadi. “My children could not believe it.”

Several members help make soap and sell small bags of soap pieces for R10. They then split the income.

At the social club garden, members grow cabbage, radish and other plants to eat and to sell.

Tema Fudukile, 83, has been a member since 2004. He stays with his daughter in Site C. The three days that he gets to spend with people in his age group is something he looks forward to every week. He says the club takes away the feeling of wanting to go back home in the Eastern Cape to be with his wife.

“Here I get to relax and not think about my problems. There is always something to do and people to talk to. Whereas, if I was at home, I would be lonely, sitting alone, until my daughter gets back from work,” says Fudukile.

Fudukile says the other social club members have become his second family in Cape Town. “When someone from the group dies, we put money together and take it to the family, because that is how close we have become, like brothers and sisters,” he says.

The club has a medical clinic that operates on Wednesdays and Fridays. This lessens the burden on the elderly, who otherwise would have to wait in the long lines at community clinics.

“Most clinics are understaffed,” says Ada Kennedy, nursing assistant at the club clinic. “Patients have to queue for the doctor and then queue again for their medications … The doctors might see up to 50 patients a day.”

She says the social club clinic sees about 16 patients a day. It accepts new patients all the time. A database helps the clinic keep tabs on patients and keep track of statistics. A lot of patients have chronic conditions such as diabetes, hypertension and high cholesterol.

Bennet Jozana has been going to the clinic since 2014. He said the clinic doctor checks up on all the patients and makes sure they stick to the right medication.

“It doesn’t take the whole day like the others [clinics],” he says.

Gavin Weir, NOAH’s housing manager and the director of the Sector Task Team for Older Persons (STTOP), says the situation older people face in the townships dates from apartheid times.

“We must realise the majority of social pensioners, because of apartheid, were never in a position to provide sufficient income for them to have a financially secure old age. So they suffered a double jeopardy,” says Weir. “In a sense, they are still marginalised.”

Weir says for many pensioners their pension is also the only source of income for their children and their children’s children. Sometimes older people suffer financial, emotional and even physical abuse from their families. The social clubs are a way for older people to escape these environments for a while.

Weir says one of the major problems facing the social clubs is a lack of safe, accessible and affordable public transport for those who do not live in the immediate vicinity.

“Older persons do not have accessible public transport. And that’s why, frequently, they can’t access services at social clubs as regularly as possible,” he says.

To address the problem, Weir says NOAH plans to launch a tuk-tuk programme as early as January 2017. Tuk-tuks, a three-wheel vehicle, can carry two to three passengers. The tuk-tuks will transport club members to and from the club each day.

The trial tuk-tuk project will be in Woodstock, servicing the social club there, and will have a three kilometre radius. NOAH hopes to expand the programme to rural areas and townships with donor funds.