Pensioners in Pietermaritzburg complain of long lines and not being helped 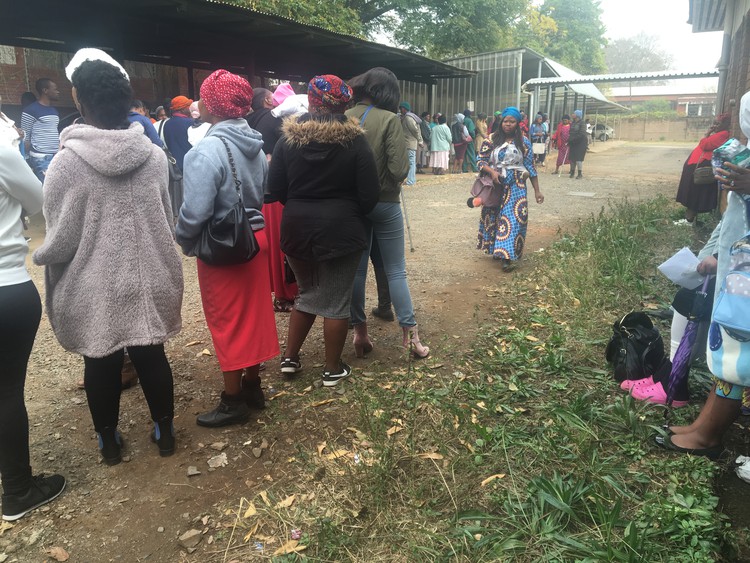 Bonisiwe Mzimela, a pensioner in her late 60s from Sweetwaters, says she has already made four trips to the SASSA (South African Social Security Agency) office in Vulindlela, Pietermaritzburg, hoping to swap her old card for the new one.

Mzimela was among hundreds of grant beneficiaries last week standing in snaking queues outside the SASSA office. Most people were there to query grant payments or to swap their current SASSA cards for the new South African Post Office (SAPO) card.

SASSA on Friday told GroundUp that the delays were the result of a computer glitch across the country, preventing the issuing of the new cards.

“The lines are very long. Since [8 August], I’ve been waking up at 4am. I went home without being assisted because the computers were offline. The queue was long the next day and all of us were not attended to. They open at 7am and close at 4pm,” said Mzimela.

“The whole day on Friday, the computers were offline. We waited until, the officials told us there is nothing they can do. Then we went home again,” said Mzimela.

Thando Mahlangu from Elandskop also stood in line with her 85-year-old grandfather. He already has the new card, but he couldn’t access his grant last month. Mahlangu said it was their fifth attempt to get help at the Vulindlela office. She said when they visited the nearest post office for assistance, they were sent back to SASSA.

‘We are forced to hire a cab that costs R350 a day. We have run out of cash. There has been a problem since July. Now the computer problems are making it worse. They promised August would be better,” said Mahlangu.

On 15 August, GroundUp visited the paypoint at Willowfontein sportsground. Most of the beneficiaries there were pensioners.

Victor Ngidi, who is 79, joined the long queue at 5am to swap his card. “This is a mess. The young ones are going in front of us. They give the space to their friends. I use a walking stick. I’m tired of standing for hours. By September we should have our new cards. We won’t meet that deadline,” said Ngidi.

A SASSA official, who asked not to be named, said, “We are short staffed. There seems to be a problem with the Post Office system. Linking information is still a huge challenge. It is really sad to see the elderly suffering. With all of these problems, we won’t meet the deadline.”

Mahaye said his office was not aware that some beneficiaries had not been paid, but urged them to visit the nearest SASSA office for assistance.

KZN SAPO spokesperson Nqobile Njapha said the Post Office and SASSA were working together to resolve the glitch and make the card swapping process run smoothly. “The Post Office uses laptops to issue the new gold SASSA cards. These are deployed to sites where there are substantial queues. It takes around four minutes to issue a new card when the system functions normally.”

Njapha said additional staff have been employed and trained to deal with the “large volumes of new card issuing”.