MyCiTi workers continue to strike as buses are burnt 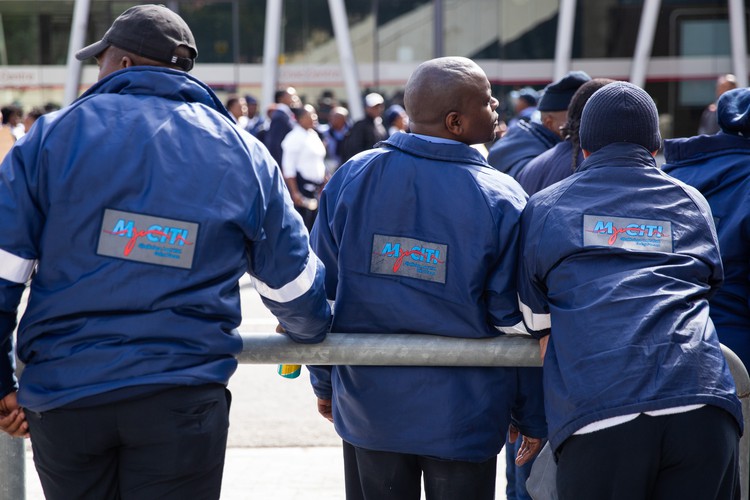 MyCiTi bus drivers are on strike, demanding higher wages and to be employed directly by the City of Cape Town. Photo: Ashraf Hendricks

Siyanda was a taxi driver before the rollout of the MyCiTi bus route along the West Coast. He says he earned approximately R7,000 a month.

He was trained as a bus driver and started working for MyCiTi in 2013, earning R5,000 a month. After yearly salary increases, he now earns R8,000.

This is not enough to support his three children and wife, he says.

The 40-year-old lives in Dunoon near Milnerton and works for the City of Cape Town’s Vehicle Operating Company, Kidrogen.

Siyanda is among 200 MyCiTi bus drivers employed by Kidrogen that went on strike on 15 October demanding a salary increase, and to be employed directly by the City.

Because the strike is unprotected, Siyanda agreed to speak on condition that we not use his real name.

Two MyCiTi buses have been torched since the start of the strike, and another two damaged in similar attacks. The City’s spokesperson, Luthando Tyhalibongo, confirmed this to GroundUp on 8 November.

A MyCiTi bus was set ablaze in Milnerton on 6 November and another at the Lindela bus stop in Khayelitsha on 7 November.

“The replacement value of the buses and equipment, as well as repairs, amounts to approximately R10 million – a loss the City can ill afford,” says Tyhalibongo.

Siyanda and his Union, the National Union of Metalworkers of South Africa (NUMSA) have denied responsibility for torching the buses.

“We don’t know anything about the burning of these buses. We assemble at the civic centre every morning and we do not burn buses,” says Siyanda.

NUMSA’s regional general secretary, Vuyo Lufele, also says he does not know who is burning the buses.

In the meantime, Dunoon taxi bosses who are shareholders in Kidrogen are escorting the buses. They are sometimes armed.

Andile Peter is a Chief Executive Officer at Kidrogen. He says his company shareholders have resorted to accompanying buses. At times they use unmarked vehicles. Sometimes they board the buses.

“It’s a people’s company for the people. Therefore, our people will defend the buses. If you talk about democracy and transformation in the transport sector and at the same time you want to destroy our company Kidrogen, then you don’t know what you want … because the owners of the company are taxi bosses,” he says.

Peter says his company employs 200 drivers and 95% of them are back at work. He says the buses were operating as usual.

However, Siyanda and Lufele deny this. They claim none of the drivers have returned to work. Talks about insourcing have deadlocked and the strike is indefinite, said Lufele.

Siyanda says Kidrogen dismissed 40 drivers in December 2017 and it is these drivers that have been called and offered a one-month contract to work while the permanent drivers are still on strike.

“I have been working for Kidrogen for five years but it feels like I am not working. I am going backward instead of progressing,” says Siyanda. “Labour brokers are getting millions of money at our expense.”

Peter says he does not know whether the burning of the buses was linked to the strike or if it was just arson.

“We can’t speculate in terms of their future at the company. We will have a thorough investigation and deal with the matter professionally within the ambit of the law. Those workers are our employees and have employees’ rights and as a company, we can’t just dismiss them as we wish,” he says.

Tyhalibongo says the City obtained an urgent court order on 18 October to protect MyCiTi passengers, personnel and assets against the strikers.

Even after obtaining the order, the attacks on the service have intensified and those who have returned to work are being intimidated, assaulted, attacked and prevented from operating the MyCiTi service, says Tyhalibongo.

Tyhalibongo says that law enforcement officers are escorting the MyCiTi buses because the City cannot afford to lose buses critical to the public transport network.

He also says the City has approached the South African Road Passenger Bargaining Council (SARPBAC)’s National Bargaining Forum for assistance. SARPBAC has made available a senior commissioner to help negotiation between the aggrieved employees and the companies who are contracted by the City to operate the MyCiTi service. The mediation is ongoing.