My session with Maama Sarafina

R500 and some fingernail clippings to improve university results 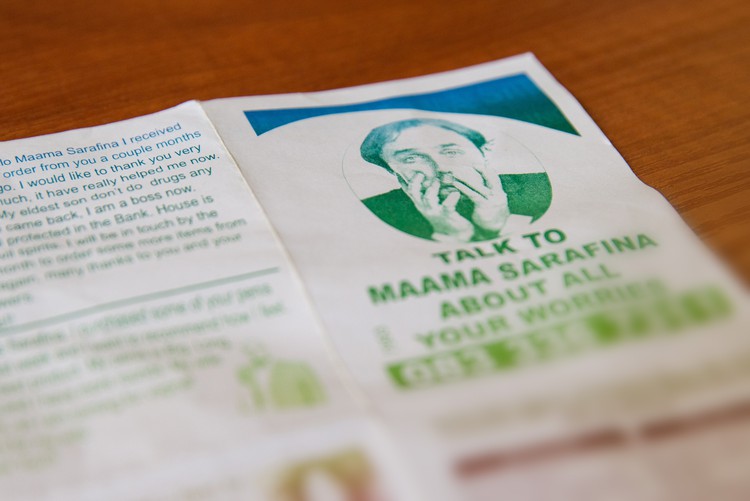 One afternoon in Woodstock, I found a brochure advertising the services of a woman named Maama Sarafina who claimed to have the solution to nearly any problem. On the back were testimonials from satisfied clients: apparently Maama Sarafina has fixed everything from drug addiction to erectile dysfunction, impotence, problems with cash-flow or with married lovers.

Curious, I gave Maama Sarafina a call. After all, her consultation fee was only R100.

She told me to send her an SMS with my name, age, and the personal issue I wanted to fix. In the message, I told her that I was having trouble at university.

She called me back to say she could meet me the next morning and I must bring some of my fingernail clippings and R500. Though the fee was higher than advertised, I agreed, and we set a time to meet. She told me that she has offices in both Claremont and the city centre, but did not provide me with an address.

The next morning, with my fingernail clippings in a pill bottle, I went to Claremont and sent Maama Sarafina a Whatsapp message. She told me to stand outside the Pick ’n Pay and she would send someone to fetch me. I told her what I was wearing and waited outside the store until a man waved at me from a doorway across the street. I crossed the street and he ushered me up a narrow set of stairs and pointed to a dark doorway down a hall. Behind it I found a small room with a torn couch, an old rocking chair, a worn carpet, and a badminton racquet nailed to the wall.

After a moment, Maama Sarafina emerged from behind a duvet nailed across the doorway on the other side of the room. She greeted me warmly. Perhaps, she sensed my unease. She said she wanted me to be comfortable. Then she locked the door and turned off the lights.

Somewhat unsettled, I obeyed her instructions to take off my shoes and follow her into the inner room. Inside, there was a lit candle, springbok skins on the floor, animal horns hanging on the wall, and in the corner of the room bags of herbs.

Maama Sarafina sat down in front of me and explained that her methods were Mozambican. Once more, she told me to be relaxed; her primary concern was my comfort.

I told her that for the past two months I had been having trouble with my university work. She explained that to be successful in my studies once more I would have to harness ancestral power. Even though I am American, she said, my ancestors still had the power to protect and guide me through life. All I had to do was contact them.

To begin this process, she had me hold out my hands together as she sprinkled herbs on them. She had me clasp my hands together and chant my name a few times. Then she grabbed my hands, spat on them, and held them close to the candle flame.She asked me if I could see the smoke rising from my hands. I could not.

Then she began to pepper me with questions. I answered most of them with a simple “yes” or “I understand”. This seemed to irritate her. She told me to rub my hands together as she sprinkled more herbs over them and instructed me to blow out the candle. I did as instructed.

As I sat in the dark, focusing on harnessing the power of my ancestors, Maama Sarafina asked me if I could see the light of my ancestral energy. I did see a light, although it appeared to be a mobile phone wrapped in fabric flashlight. She had me chant everything that I wanted aloud and prompted me to be sure to ask my ancestors to defend me from my enemies. I did as instructed, and the light moved ever closer to my face.

After a few moments, the light disappeared and Maama Sarafina re-lit the candle. She told me that everyone was born with three spiritual stars, and that one of mine was out of alignment. She said that all successful people harnessed their ancestral energy, but they did not tell anyone because jealous rivals would steal their ancestral luck. As such, I was put under strict instructions to not tell anyone about my ancestral power and the medicines she was about to give me.

She gave me two medicines wrapped in newspaper, one for washing myself and the other to pour over hot coals.

I was to do both, and at the same time speak aloud to my ancestors so that they would know how to help me achieve my goals. She was insistent that I do this in secret. “Everyone’s ancestors can guide them,” she told me, “but you must be careful because people can be very jealous.”

Just before I left, she began to attempt to schedule a follow up appointment. She even told me that she would call me later in the evening.

After leaving Maama Sarafina’s office, I unwrapped my medicines. One contained crushed green herbs, the other a mixture of herbs and string.

In the two days after my visit to Maama Sarafina, I received eight WhatsApp messages and one phone call from her. In the first messages, she told me to let her know when I had used the medicine she gave me. In the later messages, she warned me about an “evil demon attack” and the “devil’s power”. She also told me to come back and collect my fingernail clippings.

When she called me during class, I blocked her on WhatsApp.

I did have a fall the other day. Hopefully, I wasn’t pushed by a demon.