“My RDP house has robbed me of my legs” 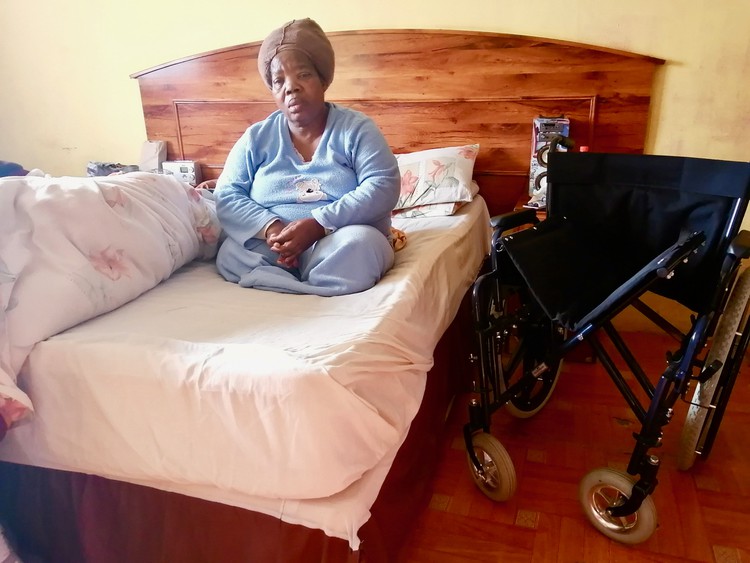 “I curse the day I received it from government,” Nomvula Frans says of her RDP house in Khayamnandi in Despatch, Eastern Cape.

“This house was built in 1997 and I started to experience problems every time it rains. It is situated on lower level and all the water from the houses on the upper level come straight into my house. It gets flooded and most of my furniture was damaged,” she said.

“I was working as a domestic worker and all of my money was used to buy new furniture all the time because of the damages caused by the water.”

Then in 2006 her house burnt down. She rebuilt it.

She blames her hypertension and diabetes on the stress the house caused her. In 2014, her legs were amputated.

“My RDP house has robbed me of my legs … I am always in tears. I used all my money in rebuilding this house. I still do the same with my pension,” she said.

“I nearly drowned while sitting on this bed as water flooded my house,” she said. “Two years ago … all my furniture was floating in the water. The level of water had risen to the level of my bed. I had to call my partially blind son and my sister’s kids to rescue me. This happened twice during heavy rains.”

“I feel like I am a burden to everyone. I use an empty paint bucket to relieve myself. The toilet is outside and I can’t get to it by myself … Even inside the house I can’t even go to the kitchen and make coffee for myself. My doors are too narrow [for her wheelchair].

“I am always stuck in that bed and I have to call people whenever I need to do something. Even to get out of this yard with my wheelchair I have to be carried like a baby … because my house is on a steep slope.”

Her son, Luyanda, said, “My mother needs a house that is suitable for her condition because she likes to do things by herself … I have to help her to relieve herself in a bucket when my sister, nephew and my two cousins are not at home. When our home was flooded I had to carry her out, though I battle with eyesight.”

“The rebuilt house does not conform to Norms and Standards and has to be demolished,” said Mazizi. A new structure would make provisions for her disability.

“The Department has decided to reprioritise the beneficiary list and start with destitute and most vulnerable groups, which include the elderly, child headed families, people with disabilities and military veterans.

“Certainly, Frans belongs to this category,” he said. He said the department was in the process of securing additional subsidies and Frans “will be prioritised accordingly”.