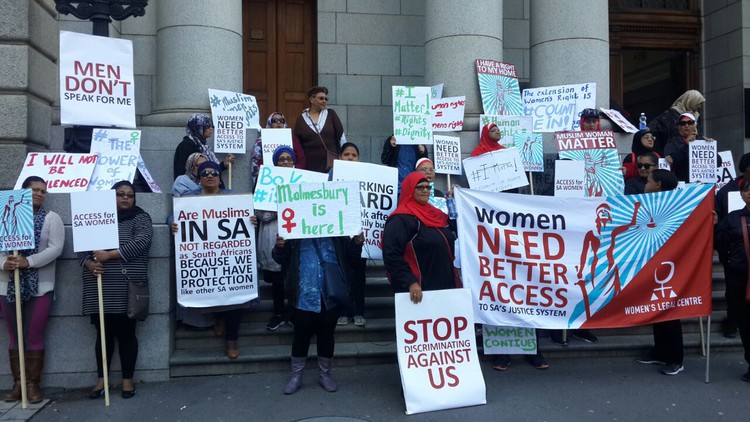 Several women demonstrated outside the Western Cape High Court during the hearing on Muslim marriages on Monday. Photo: Zoe Postman

By Mary-Anne Gontsana and Zoe Postman

The Western Cape High Court heard arguments on Monday from the Women’s Legal Centre (WLC) that Muslim women and children should be provided with legal protection, especially when the couple divorces or the husband dies.

WLC has asked in the Western Cape High Court that Muslim marriages be treated the same as African customary, religious and civil marriages.

Advocate Nazreen Bawa, representing WLC, said Muslim marriages should be “recognised, registered and regulated”. She said South Africa had a “shameful” history of discrimination before 1994 and Muslim marriages had largely remained unrecognised since 1994.

“We are ensuring that the country belongs to everyone who lives in it,” said Bawa.

WLC said its involvement was sparked by another case heard in August in the Western Cape High Court, which stemmed from an objection by the Deeds Office to the equal division of a husband’s estate between his two wives. WLC said the first marriage was under both Islamic and civil law while the second marriage was only under Islamic law as civil law does not recognise polygamy. As a result, the Deeds Office refused to register part of the house to the spouse married under Islamic law, though the husband had left a Sharia will which allocated shares of his estate to both wives.

An application was then brought on behalf of the estate. The Deeds Office argued that the legislature did not intend the term “surviving spouse” to include people married under Muslim rites, as it only registered marriages legitimate under South African law. Judgment in that matter has been reserved.

The courtroom was packed. The case is being heard by judges Siraj Desai, Nolwazi Boqwana and Gayaat Salie-Hlophe. Judge Desai asked Bawa whether this case was challenging the Quran, saying that the Quran was a “revelation and could not be questioned”.

Bawa said the WLC was not amending, questioning or disrespecting the Quran, but simply proposing that Muslim marriages be incorporated into South African law so that Muslim women and children could receive proper legal protection.

About 20 women picketed outside the court holding posters on which was written: “I have a right to my home”, “Muslim women matter”, “Men don’t speak for me” and “Will our rights see the light of day”.

The matter will be heard in the Western Cape High Court until 8 September.