Musina residents say they have had enough of water outages 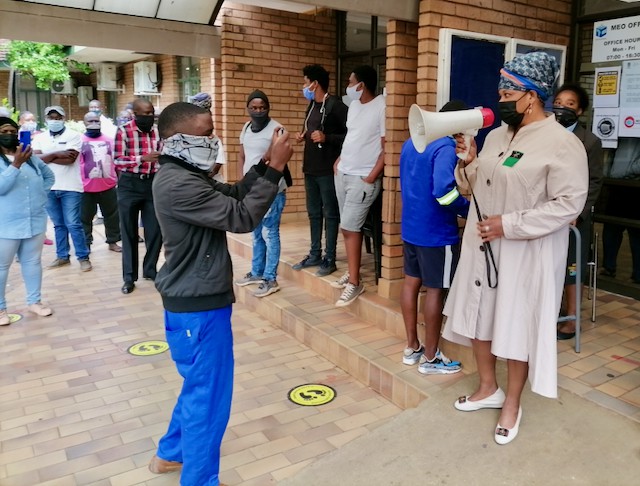 Mayor Mihloti Muhlope accepted a memorandum of demands from the Musina To The Front community structure at the Musina municipal offices on Friday. Photo: Bernard Chiguvare

People queueing at the Musina Municipality to buy electricity and to pay their water bills were surprised when they were stopped from doing so by the Musina To The Front community structure last week.

“I do not know what is going on here. My electricity will not last for the day,” said a woman in the queue, who did not wish to give her name.

About 40 Musina To the Front members gathered on Friday at the municipality to hand a memorandum of demands to Mayor Mihloti Muhlope. They said they have had enough of water outages in Musina’s townships.

Residents said that since August their water supply has been restricted from 9am to 3pm and 8pm to 3am. This is done to raise the levels in the water reservoirs.

The municipality has advised residents experiencing water shortages outside the prescribed restriction period to contact their ward councillor for water tanker services.

The organisation wants the responsibility for water provision to be taken away from Vhembe District Municipality and put under the control of Musina Local Municipality.

In the meantime they want more water trucks. They say there is only one truck for the three townships.

The mayor received and signed the memorandum. She promised to respond within five working days. The protesters then allowed municipal services to resume.

The protesters are also angered by the municipality cutting off electricity if people fail to pay water accounts. They say the electricity tariff is too high.

Sarietjie Sakala was in tears as she told the mayor that her electricity was cut off in August and again last week.

“My mother, who was the breadwinner, passed away in January this year. She used to pay for the rates and we really cannot afford the bills. Myself and my two siblings are unemployed. We live off child grants … Our water bill this month was over R1,000. I paid R600 on 14 September only to discover again that electricity was blocked again on 24 September,” Sakala told the mayor.

Daniel Dube from Matswale said he had a huge water bill he cannot pay and the municipality has blocked his electricity. “It will mean that I stay without electricity for the rest of my life,” said Dube.

Regarding cutting off electricity for failing to pay water bills, the municipality will respond when replying to the memorandum, said Dzebu.

“Musina Municipality has confidence in Vhembe District Municipality as a water authority but acknowledges that there are challenges of water supply that are being addressed,” said Dzebu.

Asked what these challenges are, Dzebu referred us to Vhembe District Municipality.

Vhembe District Municipality spokesperson Matodzi Ralushai responded that Musina town requires its borehole system to be fully functional but currently 19 of the 36 boreholes are out of action.

“The supply by water tankers will continue … The delivery schedule will be communicated with ward councillors while communication will update the community about water status,” said Ralushai.