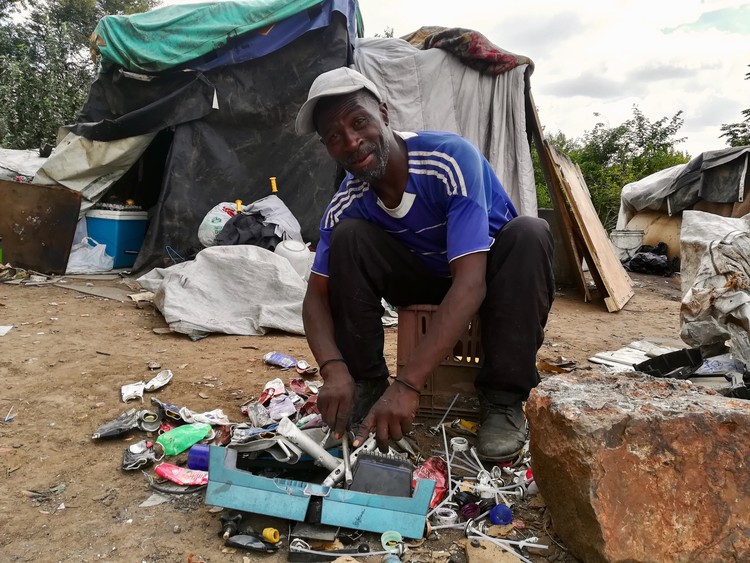 Ernest Reletooane, 59, is know as the “father of the community”. He has lived and worked as a waste picker in Mushroomville in Centurion for about six years. Photo: Zoë Postman

A community of waste pickers in Centurion are no longer facing eviction, at least not immediately. The Pretoria High Court has told the waste pickers, the City of Tshwane, and the owners of the property the waste pickers are living on to make submissions on what they want. The court will then try to find a fair solution that suits everyone.

The interdict was granted in May, but the waste pickers continued to recycle on the property. Instead of enforcing the interdict, Turnover Trading went back to court to file for an eviction order because it said it wanted to build a hotel on the property.

The City had joined the case because of its obligation to provide the waste pickers with alternative accommodation before an eviction takes place.

LHR attorney Hlengiwe Mtshatsha said this case was not simply about providing alternative accommodation. “This is not your average eviction case and it shouldn’t be treated that way by the courts … It is about the fact that these people have lived and worked in this area for almost 16 years. This is their livelihoods and taking them away from that area means taking them away from their means of survival,” said Mtshatsha.

She said the court should not be considering an eviction order in this case but rather consider why the City’s waste management policies have been excluding waste pickers who have been recycling for many years.

Mtshatsha told GroundUp that the City had submitted a report on alternative accommodation but it was unsatisfactory. The two options it provided were about 15 km from Mushroomville and already have waste pickers communities.

Mtshatsha said the report also mentioned including the waste pickers in the City’s waste management plans, but it was not specific. “The City really doesn’t have a plan at this point and we are forcing the City to take responsibility.” LHR supports integrating the waste pickers into Tshwane’s waste management systems and not seeing “them as a nuisance but rather as people helping the City to do its work”.

We have phoned and emailed the City for comment since Wednesday but we’ve received no response. 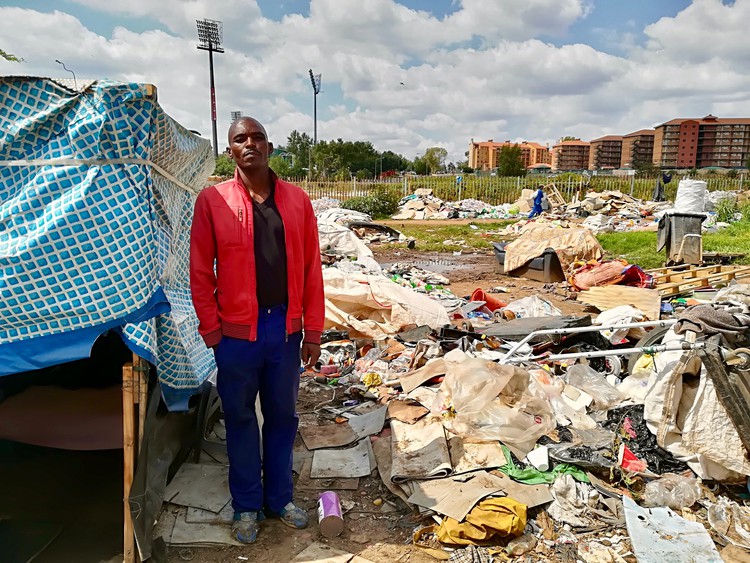 Many years ago Mushroomville was a mushroom farm. About 140 waste pickers live here in shelters made from plastic sheets and cardboard.

They sort through garbage in about a 5km radius of surrounding neighbourhoods, including Highveld, Ecopark, Doornkloof and Centurion Mall. They bring back recyclable material to Mushroomville where they separate the material into different heaps. They sell it to companies that buy the material in bulk.

Ernest Reletooane, 59, was in the sun, hammering away at an aluminium rod. He was removing a piece of steel from the rod so that he could recycle the aluminium and steel separately.

He was born and raised in Lesotho. He left his wife and three children behind to move to South Africa 33 years ago to find work on the mines in Rustenburg. He worked for Lonmin in Marikana, but his contract was terminated in 2012.

Unable to find work, he returned to Lesotho, but the employment situation was even worse there. A year later he was back in South Africa. His brother told him about Mushroomvile. Reletooane knew nothing about waste picking but he was desperate for a place to stay and to make a living.

“When I got [to Mushroomville], they welcomed me … You see, most of us here are from Lesotho and we understand the situation back home when it comes to work so we support each other,” he says.

When he first moved to Mushroomville, he found construction work, but when that contract ended he decided to try waste-picking.

“Sometimes we can leave here at 6am and come back pulling empty trolleys … It’s not an easy life but I have to do it to support my family back home,” he says.

Reletooane is now “the community’s father” says Daniel Mabale. “When I first came here, he [Reletoane] welcomed me … He built me this house and taught me the ins and outs of waste picking. He treated me like his own son and he does that for everybody who comes here.”

Mabale, 39, grew up on a farm in Brits in the North West. After finishing high school, he started studying Public Administration at Wits. But two years into his degree, he was unable to afford the fees and dropped out.

“I’m not supposed to be in this position right now, I should’ve been in the office or something … But sometimes life doesn’t go as planned,” says Mabale.

He says he slept in cement cylinders on construction sites some nights when he was unemployed.

“I was with another friend of mine and he would say, ‘Daniel I need to go back home. I can’t live like this’ … But me, I couldn’t go home. What would my children do? I would rather be beaten by the rain than go home and look at my children with nothing,” he says.

Mabale wants the City to support the waste pickers, who he points out are creating their own jobs. This would mean formally recognising what they do and providing them training. “My father is sitting at home, my brother is at home, my whole family is sitting at home, because there are no jobs … I can’t also sit at home. I need to go out and make something for myself and this is what I’m doing,” says Mabale.

“Even now, we are thinking of ways to melt the metal so that we can get more for it … We don’t want to be pulling trolleys for the rest of our lives. We have dreams to get out of here but for now, it’s the only way we can survive.” 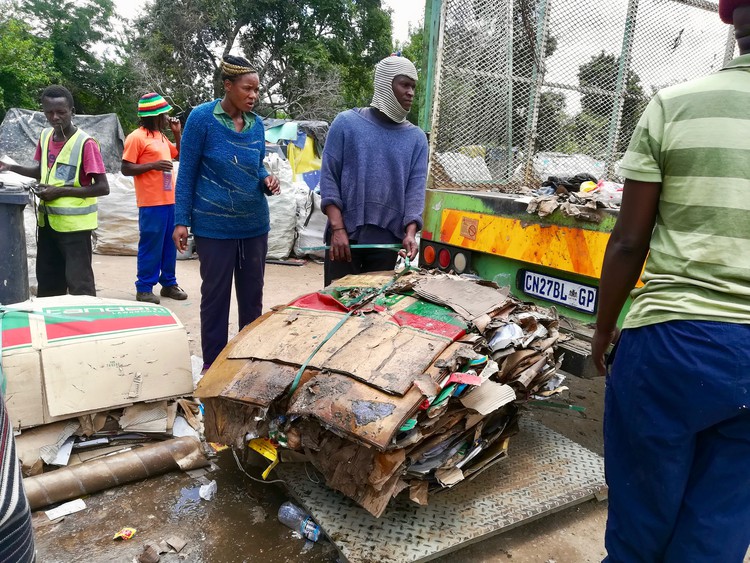 Waste pickers in Mushroomville load cardboard boxes they have collected on to a buyer’s truck. Photo: Zoë Postman