Backyarders accuse Witzenberg Municipality of ignoring their pleas for housing 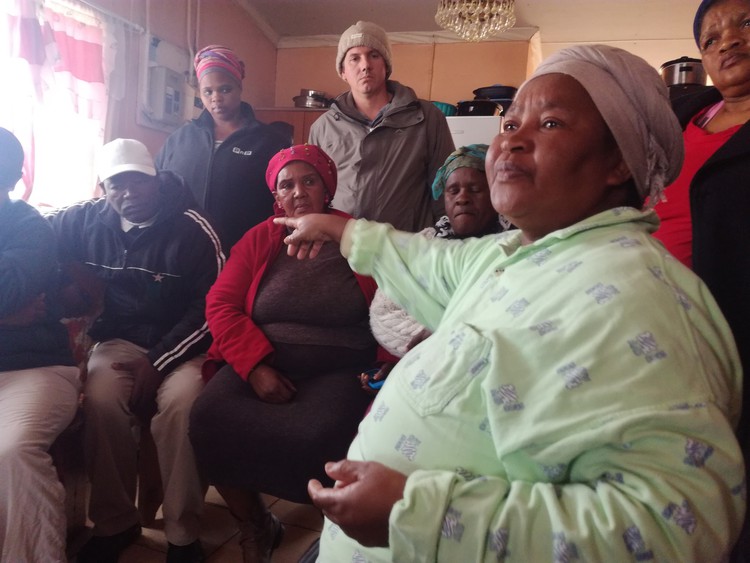 The Witzenberg Municipality has apologised to a group of backyarders whose shacks and some belongings were destroyed during an eviction in Wolseley last week. This is according to South African Human Rights Commissioner in the Western Cape, Chris Nissen.

It follows a meeting with the Witzenberg Municipality Mayor and municipal manager, called on behalf of the residents by Nissen and the Witzenberg Rural Development Centre.

The small township of Pine Valley in Wolseley erupted in chaos on Tuesday, 22 August when a convoy of police escorted members of the Red Ant Security Relocation and Eviction Services into the area to demolish shacks.

Nearly 30 shacks, built on vacant land owned by the municipality and a private landowner, were demolished. Residents, most of whom were backyarders or living with their parents, say they began erecting shacks about a month ago after their pleas for housing in the area “fell on deaf ears”. They accused the Witzenberg Municipality of sidelining them and “giving plots to outsiders”.

Monwabisi Mpeluza, acting municipal manager for Witzenberg, said the municipality had obtained a court order to demolish all the unoccupied structures on the land. Some backyarders have disputed this, accusing the municipality of demolishing homes with beds and other household items in them.

Western Cape police spokesperson FC van Wyk said that police used rubber bullets, stun grenades and teargas to disperse protesters who were throwing stones at officers and the Red Ants team. He said that no one had been arrested injured or arrested during the standoff. But when GroundUp visited the area the following day, residents said three youths had been arrested and released again on Tuesday night.

The three accused, aged between 16 and 20, appeared in the Wolseley Magistrates’ Court on 30 August on charges relating to public violence. The hearing was postponed until 6 September.

When GroundUp visited the area, backyarder Juleen Mafrika, whose shack was demolished, recounted walking to a neighbour’s home in the rain to “beg for a place to sleep” for herself and her three young children aged 12, six and three.

“That was our house. Where did they [the municipality] think we must stay if they break down our hokke in the rain? Our municipality makes promises that it can’t keep. A few years ago, the municipality cleared out plots and very few of our backyarders were given plots there,” said Mafrika.

She said her family could no longer afford to pay high rental fees. “We were paying R530 a month to live in someone’s backyard. My husband is the only one working and earns under R3,000 a month. After we buy food and things for the children, the money is gone,” she said.

“When people who aren’t even from Wolseley started building shacks on that land, the municipality was nowhere to be found. So that’s why I went to buy wood and built my shack there. But when we [the backyarders] started building, then [the municipality] came out in force with law enforcement. It’s just unfair,” she said.

Sophia Thomas, who has lived in Pine Valley for over a decade, said that lack of housing in the community had resulted in residents “taking matter into our own hands”.

Most of the houses in Pine Valley are small two-roomed RDP houses and wood and zinc structures. Many people who live in the township are unemployed, do piece work or are seasonal farmworkers, mostly from Lesotho.

“A few years ago we fought for houses and the municipality built 575 RDP houses,” said Thomas. She said the rent had increased from R60 to up to R700 over a ten-year period. Thomas shares her two-roomed RDP house with nine other family members. “Most of the people here don’t work so they can’t afford that amount for a small house.”

She said the municipality had promised 120 new erfs about two years ago. “Nothing has happened,” Thomas said. She said residents were shocked when officials came into the area to break down the shacks “because of all the meetings we were having with the municipality”.

“The houses were broken open and people’s belongings were left outside in the rain,” she said.

Resident Mercia Olivier’s 16-year-old son is one of the three who appeared in court today. Last week she tearfully told GroundUp how neighbours came to her, screaming that her son had been arrested during the clashes. “I sent my son to the shop to buy electricity. Five minutes later, I heard people screaming to tell me that they caught my son. I was so confused and shocked,” she said.

“He told me that they hit him with a cool drink bottle. He was held from 12:30 until 5:30pm. The other people were running away from police so he also ran. What person wouldn’t run? He was caught by the shop up the road. What were the police doing all the way up there anyway?” she said.

When GroundUp asked Mpeluza why the municipality had postponed the meeting with backyarders on Tuesday afternoon, he said: “Things get arranged according to who is available.”

“We have been engaging with the backyard dwellers on a number of occasions,” he said. Mpeluza denied claims that some of the shacks which were demolished were occupied.

“The order was for 42 structures, but we had to assess whether the fully erected structures were occupied. From the initial 42, only 29 structures were demolished. Some of those were not even fully built, others were just poles in the ground,” he said. Mpeluza insisted that the action was the “removal of illegal unoccupied structures and not an eviction”.

“We cannot condone something illegal.”

Nissen said that the mayor and the municipal manager had acknowledged that some of the structures that were demolished, had in fact been occupied. This was a direct contravention of the court order used against the occupation, which stated that only unoccupied structures were to be taken down, he said.

Mpeluza did not respond to several requests by GroundUp for comment on this.

Nissen said the Commission would continue to monitor the situation in Wolseley.