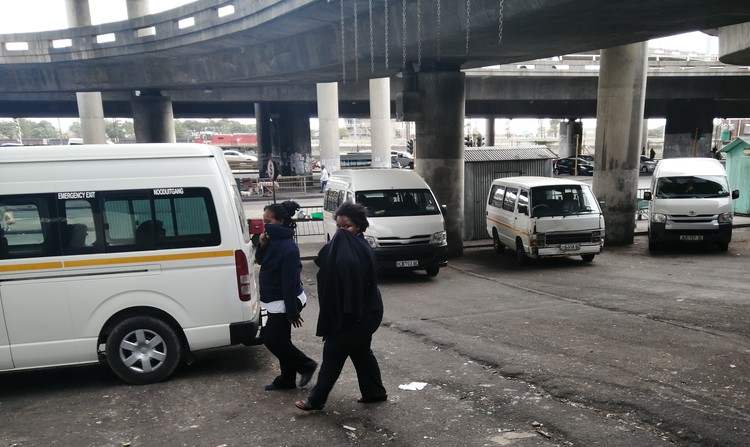 Women hold their noses as they walk through the Govan Mbeki taxi rank, where the toilets have been broken for six months. Photo: Mkhuseli Sizani

Streams of urine still flow from the broken toilets at the Govan Mbeki taxi rank in Port Elizabeth. Though the Nelson Mandela Bay municipality promised in October to fix the toilets, nothing has been done.

The public toilets were closed due to a burst water pipe in Govan Mbeki Avenue. The municipality promised to fix the pipe quickly and re-open the toilets. But that has not happened.

Instead the streams of urine continue to flow to the taxi rank. Commuters cover their nose with their jerseys against the stench. Taxi personnel and some male commuters urinate on the walls while others just pee in a sink with an unbearable smell.

Taxi driver Vuyisile Lalisile told GroundUp: “This is disgusting. We have been operating months without the toilets.

“The rank smells of poo and pee. Our taxis are also smelly. Both us and commuters walk over these streams of urine. Our shoes get wet and then we board our taxis. That causes a huge stink in our taxis.”

“We have to walk about 100 metres to get to the nearest toilet.”

Taxi fare collector Vuyani Mayinji said: “I pee on the wall because the toilets have been closed for a very long time. Everyday we have to wash the taxis because they drive over this stream of urine. Some people even poo next to these toilets.”

Women commuters have to ask drivers and other commuters to shield them with clothing when they pee next to the toilets. Some prefer to use toilets in nearby food outlets or the municipal building next to the rank.

Commuter Portia Tumani said, “The smell is unbearable. We walk over the streams of urine. We take the smell with us into the taxis.”

On 31 October 2019 mayoral spokesman George Geleba told GroundUp: “Yes, we are aware of the recent underground water burst resulting closure of the toilets at corner of Govan Mbeki and Russell Road affecting the Govan Mbeki Taxi Rank. It has been reported to our Water Department and we are working around the clock to locate the underground burst to restore water.”

Asked what had happened since, Geleba told GroundUp on Tuesday that the municipality was “in a process of contracting a supplier” . “The delay is due to the unavailability of municipal internal resources and congestion of traffic in the area.”

He said the area would be “sanitised” every three days.

“We encourage residents to use other public toilets around the area till the matter is resolved.”