Every Saturday, over 250 people gather in Plettenberg Bay to collect food for their animals.

Away from the beaches and lagoons for which the seaside town of Plettenberg Bay is famous, at 8am on a Saturday morning in the industrial area, crowds of people gather with their dogs, which run around playing, barking and causing a ruckus alongside their owners who are queueing down the street.

It is overcast and cold, so to keep them warm, the smaller pups are held by their owners, squeezed against their chests or cuddled under their coats. All these pet owners, many of them children, are waiting for assistance for themselves and their pets.

For over the years three now, volunteers that go by the name Muddy Pooches, have been distributing pet food, human food and animal assistance to local communities. 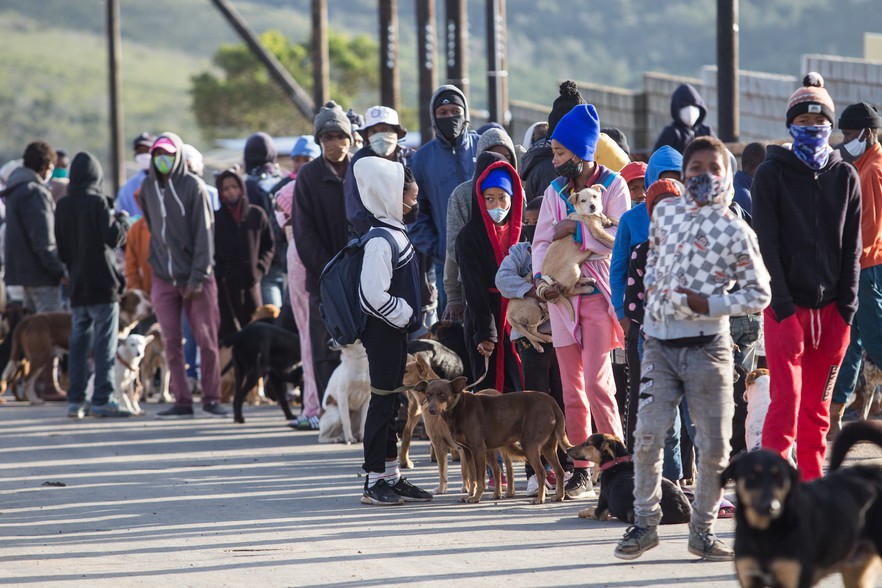 Hundreds of people stand in line to receive pet food and medical help for their pets. They also receive fruit and sandwiches for themselves. By the end of the two hour session, over 250 people have been assisted.

It started in 2017, when a group of children asked for assistance with their dogs, says Marelé Pretorius, one of the founders of the organisation. The dogs had “goeters” (ticks) on them, she says. Pretorius took ten children and six dogs on the back of a bakkie to the nearby vet.

With her friend, Tanya Hyde, they decided to offer assistance every Saturday morning. “Now we get at least 250 people,” says Pretorius. 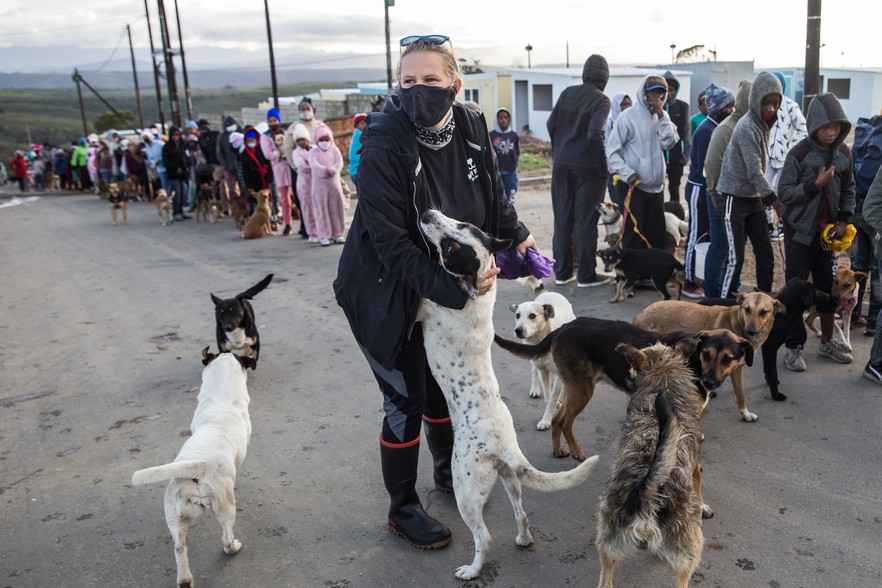 Hyde says that they also educated children about pet care and let them dip their own dogs, but since lockdown things have become a little “chaotic”. She says that the crowd has grown, making teaching difficult. The large crowd means they need to move quickly so all they can do now are quick checks.

She says, “Back then we would stand with each child. Check the dog. Chat to them. Find out if they have issues at home. Not just with their animals, but on a personal level.”

Hyde says that she learned of kids being abused and that there have been instances where social workers had to become involved and children removed from their homes. 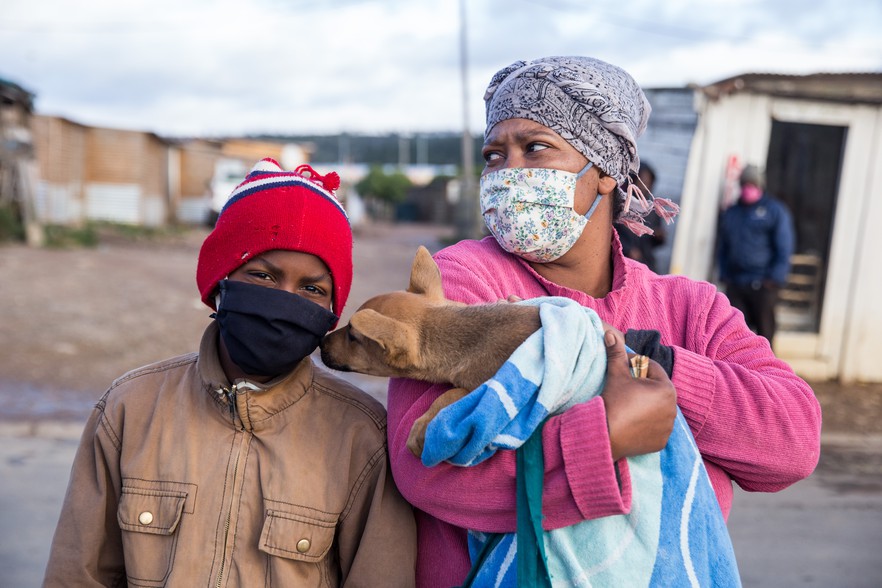 Louise Arendse and her son, Tyrique, brought along 11-week old Milo to get a check up and some food.

Louise Arendse has been staying in Pine Trees for seven years. She has three children. She is currently unemployed due to the lockdown and lack of tourism. Most of her income comes from SASSA child grants.

She says Muddy Pooches has been incredibly helpful as “we don’t have money to buy food for the dogs” and they also receive some food for the kids. With lockdown easing, she hopes her circumstances will improve. 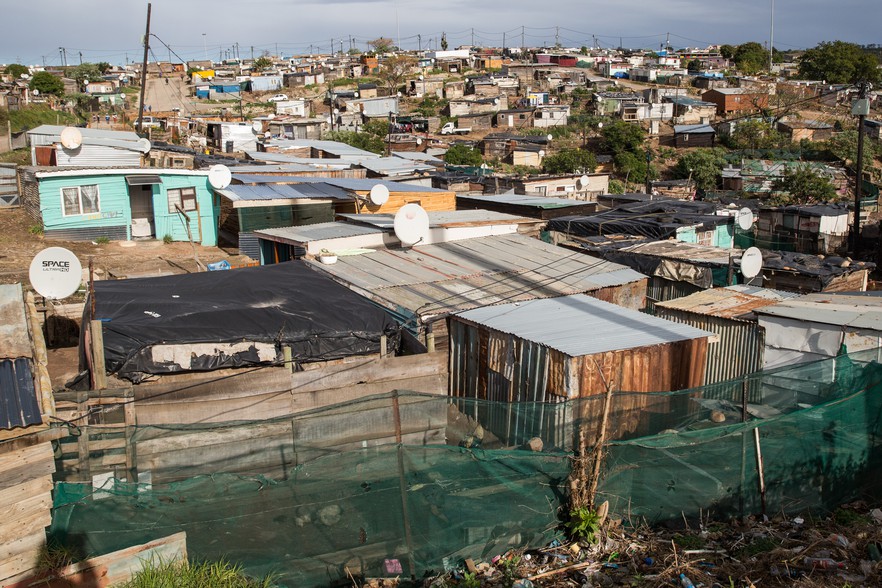 People from informal settlements including Bossiesgif, Qolweni (pictured above), Pine Trees and Kwano go to collect food for their pets from Muddy Pooches.

During the first month of lockdown they went through 13.5 tons of dog food and 4.6 tons of cat food. Hyde says that all the food for the day costs about R6,000 and vaccinations about R3,000. Everything is free, but the vaccinations cost a “donation” of R25. “It’s about taking responsibility. They’re not actually covering the cost,” she says. 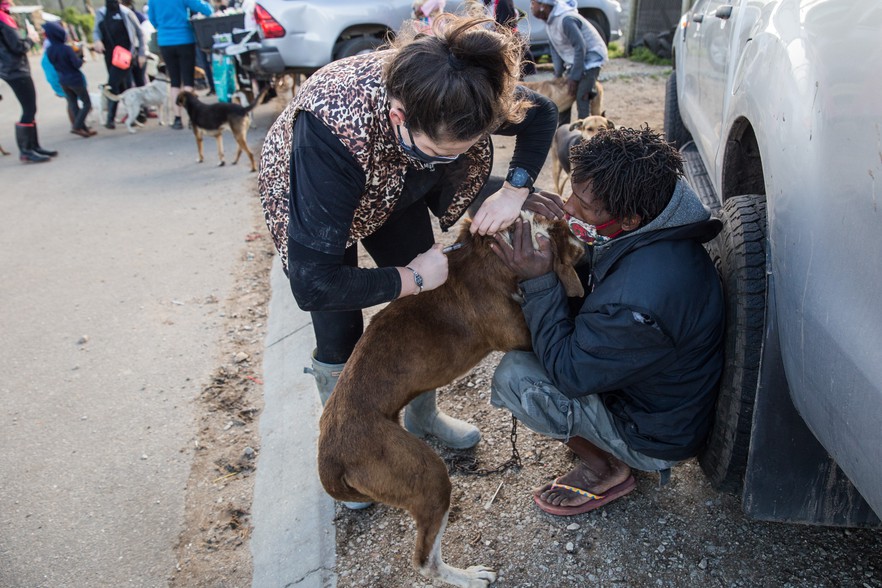 Jason Rudy Hendricks comforts and holds his dog, Rusty, while Marelé Pretorius gives an injection for mange, a type of skin disease. Muddie Pooches offer a host of medical services including deworming, sterilising and dips, or a trip to the vet.

Pretorius says that a major focus is sterilisation. Vet nurses trained them to administer vaccines. The group also focuses on assisting the numerous soup kitchens in the area with donations, shopping and deliveries. 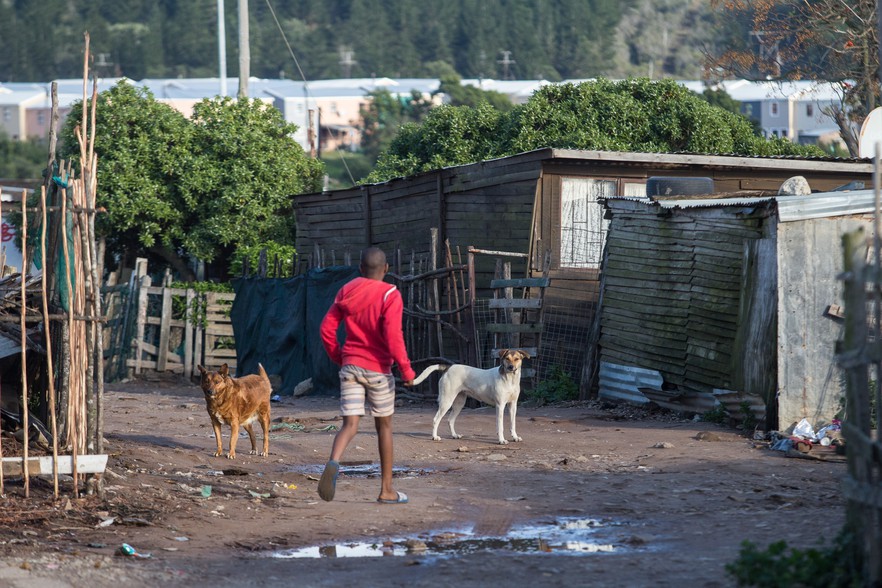 Dogs roam around the entrance to Bossiesgif.

During the strict level 5 lockdown, Hyde says that they had trouble from police. She said people were starving. They tried to do the distributions safely. “We were harassed daily by the cops to the point where we drove around with Red Bulls, Energades and chocolates in our car to try and bribe them to allow us to give hungry people food,” she says. Eventually, they were able to get the proper permits.

Muddy pooches now has a core team of four volunteers and is donor funded. 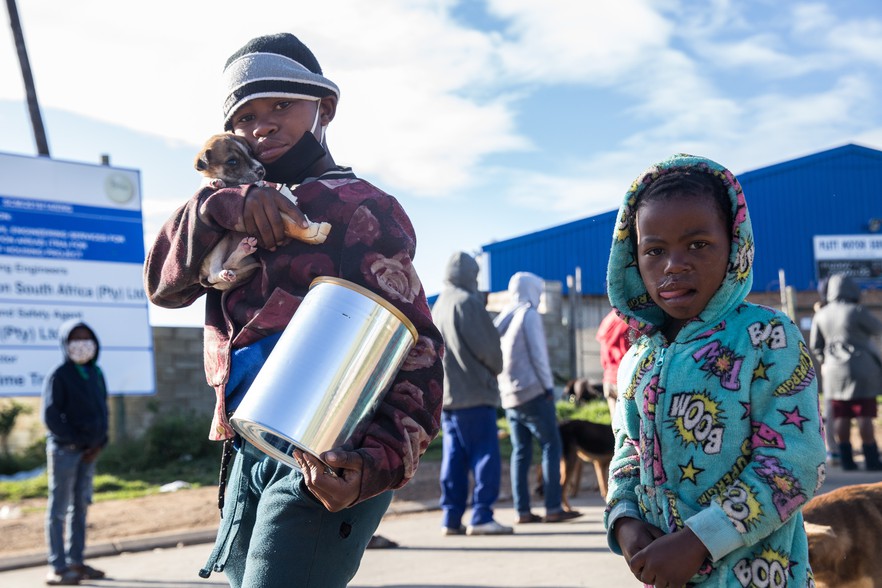