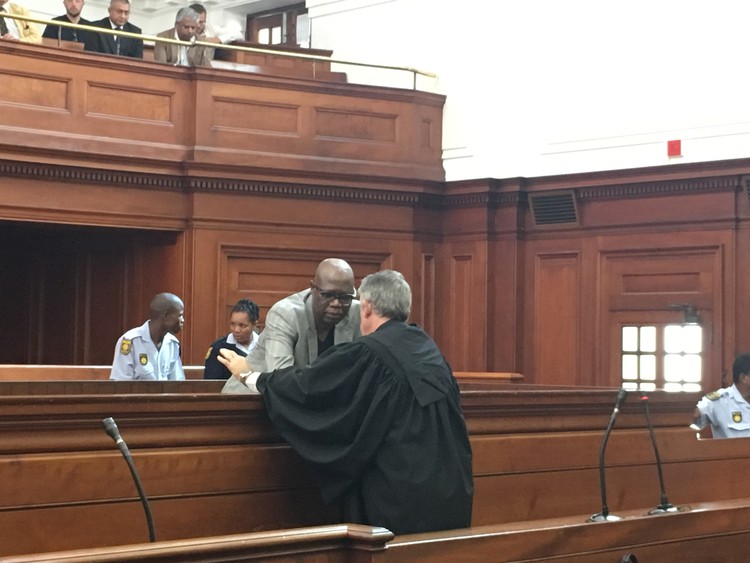 Sentencing of artist Zwelethu Mthethwa, the convicted murderer of sex worker Nokuphila Kumalo, has been postponed to allow his lawyers to complete their arguments. Meanwhile, Mthethwa is applying for bail until he is sentenced so that he can get his personal and business affairs in order.

Mthethwa was convicted in the Western Cape High Court on 16 March of the murder of Kumalo in 2013 in Woodstock.

His lawyer, Advocate William Booth, told the court today that the experts who needed to consult Mthethwa and prepare reports for his sentencing had been unable to visit Mthethwa in Pollsmoor prison until today. The state and the defence agreed to postpone sentencing to 20 April.

Booth said that it was a “tragedy of Pollsmoor” that it is “impossible to go there and properly consult”.

Booth is also applying for Mthethwa to be released on bail of R200,000.

Reading from an affidavit written by Mthethwa, where he says that he is a 57-year-old, divorced father of a 15-year-old daughter, Booth said Mthethwa had to arrange for his affairs to be tied up and that not doing this would be “potentially a few million rands risk”. Valuable paintings needed to be sold or stored; arrangements needed to be made for two properties and a rented studio; and he needed to make provisions for the financial security of his daughter who lives with her mother in England.

Mthethwa also said in the affidavit that his daughter had not been told about the conviction and that he wanted to tell her personally.

In addition, his gluten intolerance needed to be considered and an eating plan needed to be arranged with the prison.

“The fact that he may be facing a period of imprisonment does not mean that he will not comply with the bail conditions. One has to look at his background history, his character,” said Booth.

He said that in the testimonials on Mthethwa’s character “what comes across is a person who has a great ability to contribute to society, who is held in high regard by many people… people who are aware that he has now been convicted of a serious offence, yet they are prepared to put pen to paper to support him as a person”.

“He hasn’t been able to make any arrangements,” said Booth.

“His work is that of an artist and his paintings are being exhibited not just in South Africa but all over [the world]. He doesn’t require to travel, but he requires not to be in prison,” he said.

Booth said that there “could be the potential” for a sentence that wasn’t a lengthy period of imprisonment. He said that Mthethwa was “not a danger to the public” and that this was not a “gang type murder”.

An “inconvenience” to stay in prison

The state is opposing the bail application. Prosecutor Christenus van der Vijver said: “The central theme of this application is the inconvenience for Mr Mthethwa in getting his house in order, his affairs in order, and the fact that he’s a good person, as demonstrated by the annexures to his affidavit, is not really a relevant factor in this point in time.”

“We are now not dealing with granting bail to a person presumed innocent; we now have a convicted person.”

“And I ask myself the question: how many of these people have seen and really appreciated the absolute brutality with which the deceased was kicked and stomped to death.”

Van der Vijver said it would create a “dangerous precedent” if Mthethwa was released on bail for “the sake of [his] convenience”.

“No other sentence but a lengthy term of imprisonment will be a suitable sentence in this particular matter,” he said.

Booth said that he was “somewhat taken aback” by Van der Vijver’s opposition because Van der Vijver had not opposed bail when Mthethwa was found guilty. “Nothing has changed in the interim,” he said.

The bail application will be decided on Friday.