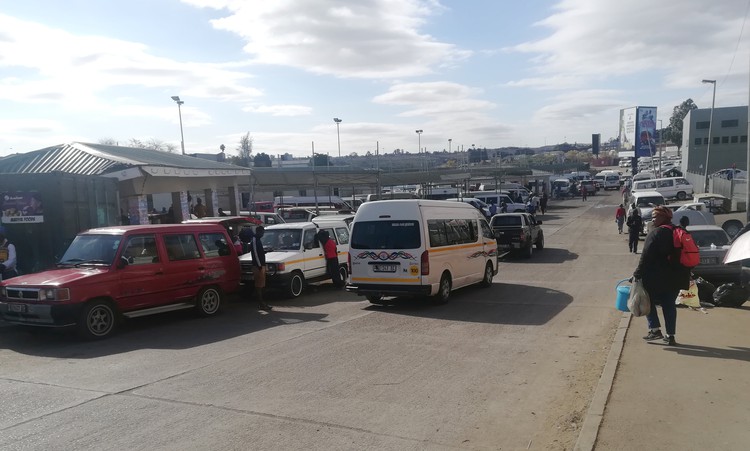 Commuters complain that Jubhill taxi rank in Mthatha is far from the city centre, unclean and unsafe. Photo: Kwanele Mketeni

Mthatha residents want one of the biggest taxi ranks in town to be re-opened.

Mamela Taxi Rank, situated next to PRD building opposite the fire brigade was closed earlier this year. The rank is convenient because it is central. Jubhill, the new rank commuters have to use, is far from the city centre. People we interviewed complained that they had to walk an extra ten minutes to work, and that it is unsanitary and dangerous.

The rank is one of five that have not been re-opened after all ten taxi ranks in the area were closed by Police Minister Bheki Cele at the end of April. This was because taxi violence in the area claimed the lives of about 60 people and injured many others since 2016, according to SAPS. This figure includes taxi bosses, drivers and passengers. The violence was a result of a fight over routes between rival taxi associations.

In a dialogue between commuters and Transport MEC Weziwe Tikana at Mthatha Airport Hangers two weeks ago, it emerged the rank will remain closed permanently. This was attributed to King Sabata Dalindyebo Municipality plans to develop the land in which the rank is situated.

King Sabata Dalindyebo Municipality spokesperson Sonwabo Mampoza confirmed this. “We are in a process of issuing a notice inviting accredited private development companies to participate in this development initiative,” he said.

He assured residents that a taxi rank will form part of the development. “We intend to build a shopping centre, taxi rank, … offices and residential apartments. Infrastructural upgrades are also on the cards on that piece of land,” said Mampoza.

However, commuters like Nombasa Mbiyozo want the taxi rank to be reopened immediately. This is because the new rank is a health hazard. “There are no proper sanitation facilities in this rank. There are no functional public toilets, water or electricity. When it’s dark, it’s dark.”

Another commuter, Lubabalo Wolela, described the new rank as a high crime spot. “People are constantly mugged here. Especially after 5pm. It’s winter now and it gets dark quickly. Everytime we need to go home, we have to walk in numbers or otherwise we’re in danger,” he said.

Mampoza said the Municipality is looking at fixing sanitation issues at the rank.

We have been unable to get comment from the taxi associations.