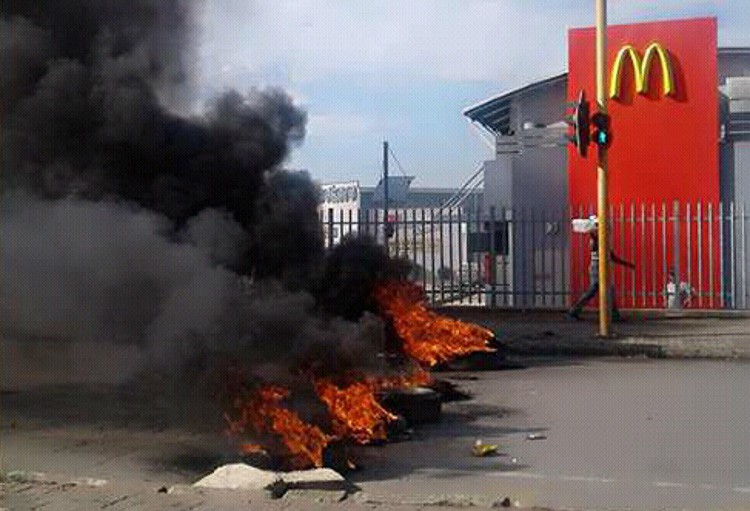 Hawkers burned tyres in Mthatha today in protest against the confiscation of their stalls by the municipality. Photo: Manqulo Nyakombi

Mthatha city centre was at a standstill on Thursday, with all shops closed as angry hawkers took to the streets to demand that the municipality return materials seized from them.

Hawkers burned tyres and threw garbage into busy West Street demanding their stalls back from the King Sabatha Dalindyebo Municipality.

The protest, which has entered its second day, came after the municipality issued a notice last Friday instructing all hawkers in Mthatha city centre to remove the stalls from which they sell food, within 48 hours.

“Again on Tuesday, we went to the municipal offices to remind them about the promise they made to us in 2013, but we came back with no proper answer,” said Gawulekhaya.

She said that when hawkers came to work on Tuesday morning they found some stalls had been removed by law enforcement officers.

“We went to the municipal offices to ask them what was happening. They told us that the decision had been taken at a council meeting and [there was] nothing they can do to change it,” she said.

“What we do not understand is why we were not called to that council meeting,” said Gawulekhaya.

A hawker who sells pap and stew at the taxi rank, and who only identified herself as Babalwa, said she had lost all her belongings.

“I have been selling here for years. This is the only thing I know how to do. They just took it away from me,” she said.

She said she had raised her four children using money from her sales.

Municipal spokesperson Sonwabo Mampoza said the hawkers were trading illegally and had been given enough time to remove their stalls, but had not done so. He said hawkers had been told to form a forum to deal with the municipality.

But Gawulekhaya said the hawkers had asked the municipality to stop removing their stalls until the forum had been formed. “But they failed to do that,” she said.