Msunduzi River spill: Small farmers worried they will not be compensated for “losses”

Fund set up to assist with cleanup 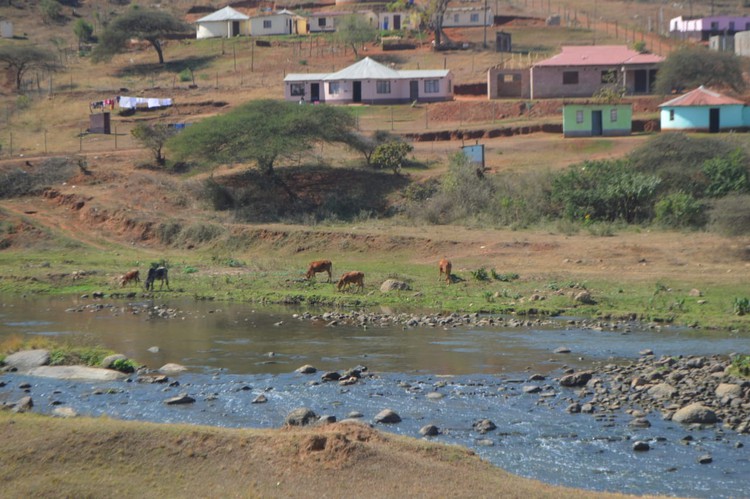 While authorities warn that livestock should not drink from the polluted uMsunduzi river, people of KwaXimba say it is almost impossible to stop cattle from going to the river. Photo: Mlu Mdletshe

Small farmers on the banks of the Msunduzi River are blaming Pietermaritzburg’s edible oil manufacturer, Willowton Oil, for potential crop failures. They are worried they will not be compensated. And a water expert, appointed by Willowton to assess the damage, has explained the effects of the spill on fish life.

Several hundred thousand fish, and other forms of aquatic life, have died in the river following a spillage of 1.6 million litres of vegetable oil and caustic soda on 13 August.

A colossal storage tank at the Willowton factory collapsed, damaging an additional two tanks and causing the bund wall (containment facility) to break.

“While our storm water system flows into purpose-built containment dams to contain any spillage, they could not withstand the resultant volume,” said Willowton spokesman, David Swaiden.

The spill worked its way downstream, turning the Msunduzi and Mgeni rivers soapy and toxic as far as Inanda Dam, 70km from the plant.

Public warnings were subsequently issued to people not to collect and eat dead fish, let livestock near the water or use it for irrigating crops.

Now people living far downstream fear that their crops will dry out if they are unable to use the river water for irrigation. And some believe that livestock have died as a result of the pollution.

Meanwhile, the Duzi Disaster Fund has been established by the Lower Mpushini Valley Conservancy to assist with the clean-up of the river in and around the conservancy which is situated less than 7km downstream from the Willowton Oil plant.

How the fish died

Willowton has appointed river specialist Mark Graham to assess the broader impact of the spill, from source to sea. Graham, the director of GroundTruth, an environmental consultancy agency focused on water resources, explained how the spill killed so many fish.

Firstly, it turned river water soapy, interfering with mechanism in which dissolved oxygen is absorbed across fish gill membranes. “This prevented the fish from being able to extract what oxygen was in the water. This same problem would also have affected aquatic invertebrates (insects) and other life in the water.”

Like the air we breathe, the survival of aquatic life depends on a sufficient level of oxygen dissolved in water.

“We have recorded low enough dissolved oxygen to confirm the cause [of deaths], which is also congruent with the characteristic fish behaviour while they were dying,” said Graham.

“It’s much like us sucking in a litre of soapy water into our lungs and then trying to breath!,” said Graham. “The detergent would coat the inside of the lungs, upset some very delicate chemistry at the lung interface with the air and prevent oxygen entering the lung tissues.”

Many fish had attempted to climb out the water to escape the pollution. Others had jumped several metres out the water onto river embankments.

Graham said while fish were the most obvious and charismatic life form affected, there had been notable impact across the food web. “We are now assessing these impacts, covering all levels of the aquatic system, from algae through to aquatic invertebrates (insects), crabs and snails.”

Graham said this large die off had created further problems with the decomposition of dead material causing a “microbial bloom”. This, in turn, was sucking up much of the residual oxygen in the water - a second hit to the few remaining fish and other aquatic life forms.

“Fortunately there has been dilution through the system,” said Graham, referring to steps that Umgeni Water took in flushing the Msunduzi river with water from Henley Dam immediately after getting news of the disaster.

“This will continue to improve with time and as the summer rains flush the systems. We will be undertaking regular monitoring of the full system for at least a year to chart the recovery, added Graham.

He said the impact of the spill was far-reaching.

A 12-year-old herd-boy also drowned in Mboyi in Enkanyezeni village, reportedly while collecting dead fish from the river in spate. This was on Friday, 15 August, soon after Umgeni Water released water from Henley Dam to flush the river. Police in Bishopstowe have confirmed the drowning of Teo Sebetse. The boy is said to be a South African, born to Lesotho parents.

Small farmers worried about their cows

Livestock owners say it has been difficult to keep cattle away from the river, and some claim cows have died after drinking soapy, polluted water. But this can’t be confirmed, and even some environmentalists are sceptical of these claims.

Although reliable figures are not available and autopsies have yet to be done, in a week-long field trip in the Valley of the Thousand Hills, Roving Reporters met several farmers who demanded that the cattle deaths be investigated.

In this household we just love fish. I fish three to four days a week … catching five to ten carp

Leonard Majola, of Mhali in KwaXimba, said he had lost one cow from his herd of 19.

He said he and other cattle owners in the area received a call from Mboyi, upstream of them, on Friday, August 15, warning that the river was rising. They then hurried to fetch their animals.

KwaXimba overlooks the river and Majola and his fellow farmers could see a “white cloud” floating on the surface. The 70-year-old collected his herd, only realising later when counting the animals in his kraal that one was missing.

He said he was calm at the time, expecting it to return, but it never did. He said his herd had continued to drink from the river – and seemed fine. He said he was now more worried that the spill and resultant massive fish kills, could put an end to fishing along his stretch of the river for a long time – a sore loss for many, including his family.

“In this household we just love fish. I fish three to four days a week … catching five to ten carp,” he said.

60-year-old Musa Mhlongo, also from Mboyi, said it had been impossible to prevent his cattle drinking from the river.

He and a few other farmers tried to lock their herds in a field, but the cattle consistently escaped and went to the river, he said.

We received other reports of cattle losses, and saw a dead calf lying along the river, but none of this could be positively linked to the spill.

Warnings from authorities that polluted river water could pose a threat to crops, is also of concern to small scale farmers who rely on the nutrient-rich waters of the Msunduzi and Mgeni rivers for irrigation.

Sipho Mbambo grows vegetables for his family and for a feeding scheme that supplies two schools in Mhali, KwaXimba. He said he had now had to switch from using river water to chlorinated drinking water from tanks to irrigate his garden.

But the tanks have to be refilled and this means the water must be trucked in or brought by pipe from a neigbouring home, both at some cost. He said some of his vegetables were already beginning to shrivel after he had switched to using piped water.

He said his cabbages were nowhere near ready to reap and would not survive long without adequate water.

“Cabbages require more water than my other vegetables and the water I have left won’t last me very long,” said Mlambo.

The 63-year-old doubted those responsible for the spill would be held to account. He said: “What will happen is the white man (Willowton) will pay money to the people who are supposed to be fighting for us and this matter will be buried. That we know.”

Swaiden said the company’s Community Social Responsibility (CSR) team was investigating all impacts of the pollution in affected communities, including allegations of cattle deaths.

“We received one report that a cow had died due to the water quality. An autopsy was done, and a full veterinary report supplied in which it was determined that the animal died from advanced protein energy malnutrition, a common nutrient deficiency seen in winter when grass is nutrient poor,” said Swaiden. “The vet went on to further assess many cattle along the river’s edge and none showed any signs of illness or disease.”

Swaiden said the Willowton CSR team was also distributing bottled water to communities, assisted by Gift of the Givers.

“We have also distributed JoJo tanks and bulk water to communities whose livestock have been directly affected,” said Swaiden. “This is an ongoing effort and we remain absolutely committed to assisting the affected communities.”

A spokesperson for the Department of Agriculture has called on people in affected communities to report cases of dead cows so they can be investigated.

The KwaZulu-Natal Department of Economic Development, Tourism and Environmental Affairs (EDTEA) said it was working with a multi-disciplinary task team to oversee the river clean-up process, and will in due course, “pronounce on the steps undertaken to rehabilitiate the river’s ecosystem and biodiversity”.

“We are exploring all available legal and compliance avenues towards a speedy resolution,” said EDTEA spokesman, Nathi Olifant. 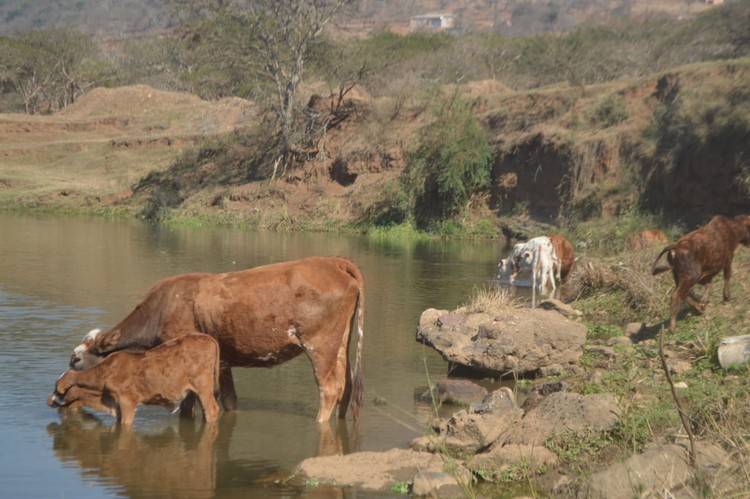