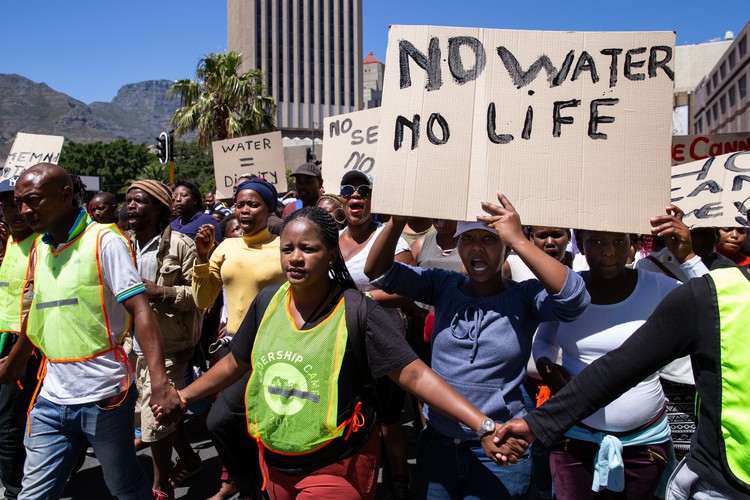 Residents of Cape Town informal settlements marched to the mayor’s office to highlight their right to water and basic services. Photo: Ashraf Hendricks

Hundreds of residents from informal settlements around Cape Town marched to the Civic Centre on Thursday to highlight their right to water, sanitation and other basic services.

Led by the Social Justice Coalition (SJC), they came from Ses’khona in Philippi East, Nkandla in Kraaifontein, Island in Makhaza Khayelitsha, Green Point in Khayelitsha and KK Section in Khayelitsha.

In a detailed memorandum, addressed to Executive Mayor Dan Plato, the residents highlight their right to water under the Constitution.

“We live in informal settlements where there is no adequate access to water and in some of our communities there are no taps or toilets at all,” they said. “The water crisis has been averted for those who have always lived with water excess … While others breathe sighs of relief we are still in crisis, we have always been in crisis,” they said.

The memorandum said the City budget for standpipes in informal settlements had been reduced from R4 million to R1 million in the 2018-9 budget. “The City has not concerned itself with the needs of its poorest residents.”

“The issue of water is just the primary issue. We live in complete squalor! We have no toilets and no electricity either,” the residents said in the memorandum.

Their demands included: a meeting with Plato; taps and drains; full flush toilets; electricity; refuse collection; and a response from the City within ten days. 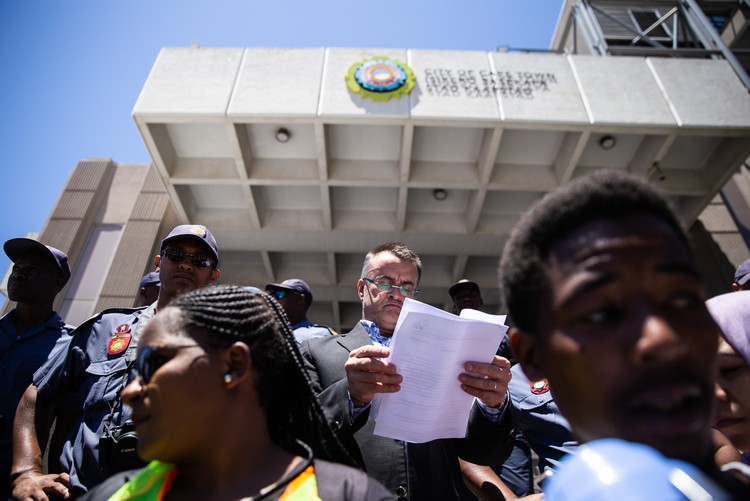 Ses’khona residents, who live on private land, have no toilets or electricity and use water from a dirty stream nearby.

Sinovuyo Swelindawo has been living in KK section for 11 years. She lives with two young children and her brother. “We have no toilets and electricity. We are forced to illegally connect electricity which is dangerous. There have been children who have been electrocuted in the area,” she told GroundUp.

“We are also in desperate need of a container where we can dump our garbage. Our area is turning into a dump site because we have nowhere to throw our rubbish.”

Nkandla resident Phathiswa Morris said “I have been living in Nkandla for a year and there are no toilets, water or electricity. We use buckets to relieve ourselves and then go and dump the contents in a nearby drain.”

“Other residents resort to digging holes in a field as toilets. There are seven of us in our shack. My children sometimes go to school stinking because they have not washed because there is no water. I have been called countless times to their school because of this”.

The memorandum was accepted and signed by City Council Director for Safety and Security Richard Bosman. He said he would deliver the memorandum to Plato.