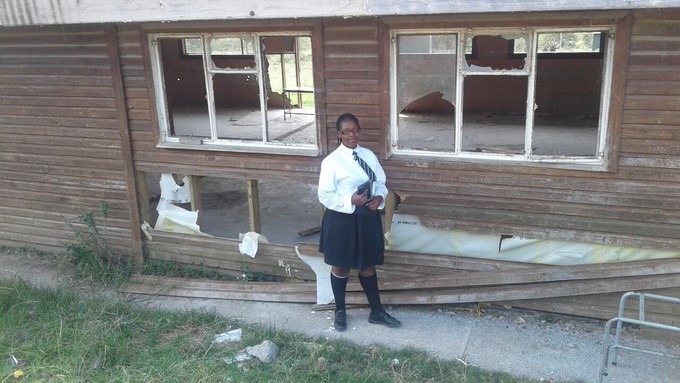 Today marked the deadline for the Department of Basic Education to replace all school buildings made of mud, asbestos, metal or wood, and for providing water, electricity and sanitation to schools which do not have these. But learners at Vukile Tshwete Senior Secondary School in the Eastern Cape still study in broken wooden classrooms, with poor sanitation and water supply.

Aqhamile Mayekiso is a grade 11 learner at Vukile Tshwete Senior Secondary in Keiskammahoek. She used to go to Simon’s Town High School in the Western Cape, and if she had a choice she’d go right back.

“If I had a choice I would go back instead of studying in bushes, with broken classrooms,” she said.

On 29 November 2013, Minister of Basic Education Angie Motshekga published the Regulations Relating to Minimum Uniform Norms and Standards for Public School Infrastructure, which set several deadlines for improving schools. Today is the deadline for the replacement of schools made of “inappropriate structures” and the provision of basic levels of water, sanitation and electricity to schools.

Announcing the release of provincial progress reports, Motshekga said today that “relatively good progress” had been made providing water, sanitation and electricity to schools.

Vukile Tshwete Senior Secondary has only six toilets and one standpipe tap for more than 300 learners, said Mayekiso.

“My own classroom has no windows. The ceiling is broken and when it rains we carry umbrellas inside the classroom to stop our books getting wet. The floor is broken and we often see snakes,” she said.

“When my sister told me that she was taking me to Vukile Tshwete High School I thought I was going to one of the best schools here in Keiskammahoek,” said Mayekiso. “As we all know, Steve Vukile Tshwete is a legend; we study about him at school. I was so shocked when I saw broken wood and broken windows.”

She said when students went to the toilet they walked in groups because they were scared of criminals. A student was raped on the way to school last year, she said.

A member of Equal Education, she has been leading #fixourschools marches to the Eastern Cape Department of Education. But, she said, the department had turned a deaf ear to demands for better school infrastructure.

Many teachers had left as a result of poor conditions at the school, she said.

“This year we had about three teachers who left and they were never replaced. Grade 11 and 12 wrote exams without a Physical Science teacher.”

“This place was not supposed to be a school but there are few high schools around, so we are forced to study here.” The school was formerly a military camp, built in the 1980s.

At her former school in Simon’s Town, Mayekiso said, she had “good teachers” and “perfect” infrastructure. “Teachers loved their job, they were not living in fear of snakes or criminals while inside school premises like the teachers at Vukile Tshwete High,” she said.

In a statement published on Facebook earlier today, Equal Education accused the minister, her department and the nine provincial education departments of having “wilfully and substantively missed the first deadline” of the minimum norms and standards policy “in that they have failed to eradicate all schools made wholly of mud, wood, metal, and asbestos” and provide water, sanitation and electricity to schools which do not have these.