Motshekga gets poor rating from Equal Education after six months 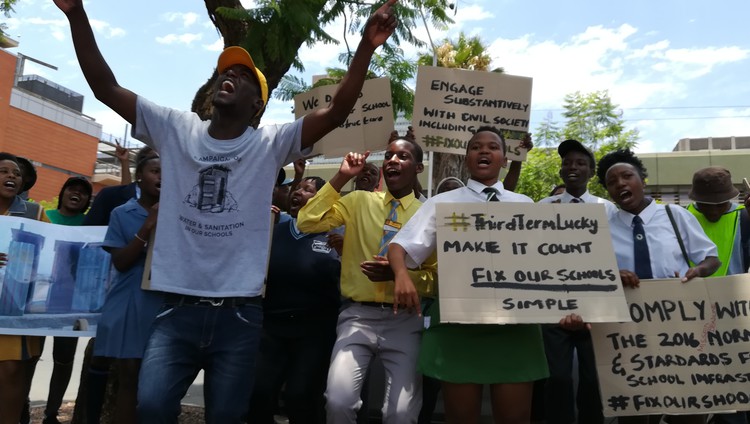 About 30 learners sang songs and held placards which read: “#ThirdTermLucky make it count and fix our schools, simple!”, “We demand better school infrastructure”.

Addressing the crowd, EE Deputy Secretary General Tracey Malawana, said it was important to have this appraisal early into Motshekga’s third term so the areas of focus could be identified and solutions could be found before her third term ended.

The appraisal comes after a mock swearing-in of Motshekga which was held on 18 June 2019 outside the same offices after her re-appointment for a third term. At the mock swearing-in, EE handed over a memorandum which it called the “People’s Performance Contract” that demanded that the minister’s contract be made public.

EE also wanted the contract to include that she must comply with the Norms and Standards for Public School Infrastructure; that the department must achieve a measurable and radical improvement in early grade literacy rates; and that she must be obliged to engage with civil society at regular intervals. The department was given until 1 July 2019 to respond but Malawana said EE had not received a substantive response as yet.

She said EE had drawn up the contract to hold Motshekga accountable.

On scholar transport, Malawana said: “We still have thousands of young people who are walking to schools, many kilometres, and we have issues of safety in our communities … so we can’t have learners walking on dangerous terrain to get to school.”

Johan Visser, a director at the department, collected the appraisal on behalf of the minister as she was in Cape Town. He said he would scan the document and send it to the minister within half an hour.

“I think the minister is also very serious about this and I think she is going to give a full report on this and say of all these key performance outcomes, what she has done and plans to do in the next year as well as the next five years of her term,” said Visser.