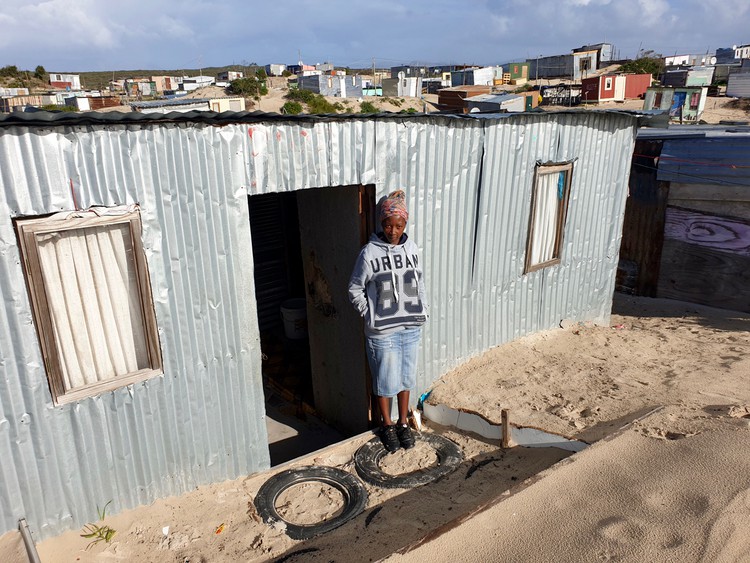 Nomaphelo Nomala had to give up her daughter who has a serious medical condition that prevents her from living with her mother in this unserviced shack. Photo: Mary-Anne Gontsana

Nomaphelo Nomala lives in a tiny shack in Endlovini informal settlement, Khayelitsha. Since the age of six, she has been paralysed down her right side and she has a speech impairment.

Nomala says her only wish in life is to live in a house with basic services, so that she can once again live with her child. She had to give up her child who also has a serious medical condition that prevents her from living with her mother.

Nomala’s shiny silver shack is perched on top of a white sand dune. It has no electricity. She gets water from a communal tap, which is also quite some distance away. There is no toilet, so she uses an open field, also some distance away.

Nomala lives with her seven-year-old son, Lihle. But it is her youngest, Iviwe, who she is missing.

Iviwe was born In December 2014. Nomala was then living in a shack in New Cross Roads, Gugulethu.

“My daughter was around eight months when I noticed that her eyes were yellow and her stomach was bloated. I took her to a day hospital in the area, but on two different occasions I was told that there was nothing wrong with her and that she just had an eye infection.

“It was in August 2015, while I was bathing her that I noticed that blood was coming out of her eyes and her stomach had gotten even bigger,” says Nomala.

Nomala took Iviwe to the day clinic, but she says the nurses were of no help. She was told there was nothing wrong with her child and she needed to wait in the queue like all the other patients.

She took a taxi to Red Cross Children’s Hospital, where Iviwe was admitted, even though she did not have a referral letter.

“Iviwe was diagnosed with liver failure. I didn’t even know what that meant. All I wanted to know was whether my child would be okay,” says Nomala. “One of the doctors told me that Iviwe’s liver was so badly damaged that she would need a transplant otherwise she would not make it. I was devastated, but asked God to at least let Iviwe see a year. But while in the hospital she started getting better and I was ultimately allowed to take her home.”

But because of the poor living conditions at home, Iviwe kept falling ill. After vomiting blood, she was admitted to hospital once again. In April 2016, a donor was found and a liver transplant was done.

As she was barely surviving on her children’s social grants and her disability grant, Nomala made a traumatic decision in February 2018: she would give up her child.

“I was told by the doctor after the transplant that my daughter would need to be housed in a proper and clean environment so she would not fall ill,” says Nomala.

“With much hesitation from the hospital staff and me telling them that I had no other choice, Red Cross Hospital took Iviwe in and ultimately found her accommodation at the St Joseph’s Home,” she says.

St Joseph’s in Montana is an intermediate paediatric care facility for children with life limiting and life threatening illness.

Nomala says because of transport and money constraints, she is only able to see her daughter once or twice a month. “I have to take a bus and a taxi to get to her and sometimes I do not have money to do so.”

Nomala says she has applied for a house. But when GroundUp inquired at the housing database office, Nomala’s name was not on the list.