Sikhumbuzo Soni was shot in the mouth during protests in Pietermaritzburg 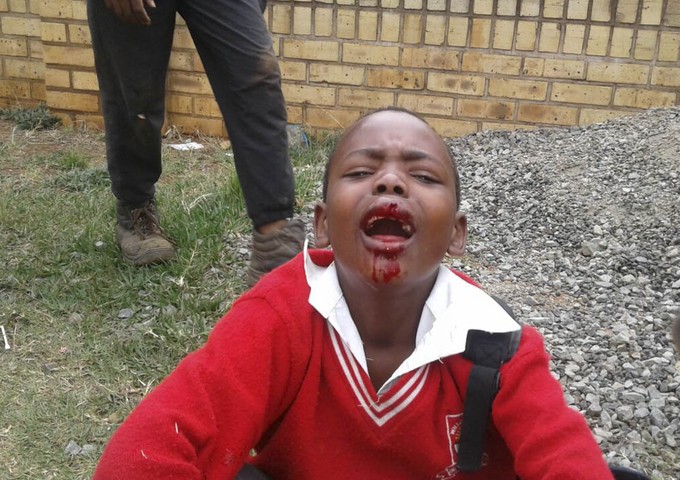 The mother of Sikhumbuzo Soni, 10, has laid a complaint against the police after her son was injured during protests on Friday. Photo supplied

The mother of a 10-year-old boy shot in the mouth during protests in Pietermaritzburg on Friday has laid a complaint against the police.

Sikhumbuzo Soni was on his way to school in Willowfountain on Friday when he was shot by a rubber bullet, according to his mother Agrineth Mnyandu.

Police were using rubber bullets and tear gas to disperse protesters burning tyres and blocking roads with stones and branches. All the roads to the township were blocked. The protesters were demanding water.

Mnyandu, accompanied by Mazwi Ngubane from the School Governing Body, opened a case at the Plessieslare police station today.

Mnyandu said she had first heard about her son’s injury on Facebook.

“I was still at work when I saw my son’s picture on Facebook. I knew that there was a protest in Willowfountain, but little did I know that my son would be a victim,” she said.

“I rushed home, and my son was not there. I looked for him for hours. He was not at home and I had no clue where he was.”

She said she had found Sikhumbuzo at Edendale hospital where he had been taken by a nurse from the local Azalea clinic.

“His upper lip is cracked and some of his teeth are damaged,” she said.

Today, Sikhumbuzo was at home. His mother said he could not eat solid food and would have to have surgery.

Ngubane said what the police had done was very wrong.

“Even the community members, they were not provoking the police, but rubber bullets and tear gas were used,” said Ngubane.

“I want justice done. My son did nothing. He was going to school, that’s all,” said Soni.

Community members who spoke to Ground Up said they had been without water for eight months.

“We have no water and there is nothing we can do except taking it to the street. Things are worsening in our homes and even the kids sometimes go to school without bathing,” said resident Zandile Ndlovu.

This is the second water protest by the Pietermaritzburg community this month.

Police spokesperson Thulani Zwane said he had not heard about the shooting.

He said a case of public violence had been opened against 25 community members.

Agrineth Mnyandu gave GroundUp permission to user her son’s name and photo. See our response to a complaint about this.