“Most sex workers are mothers” 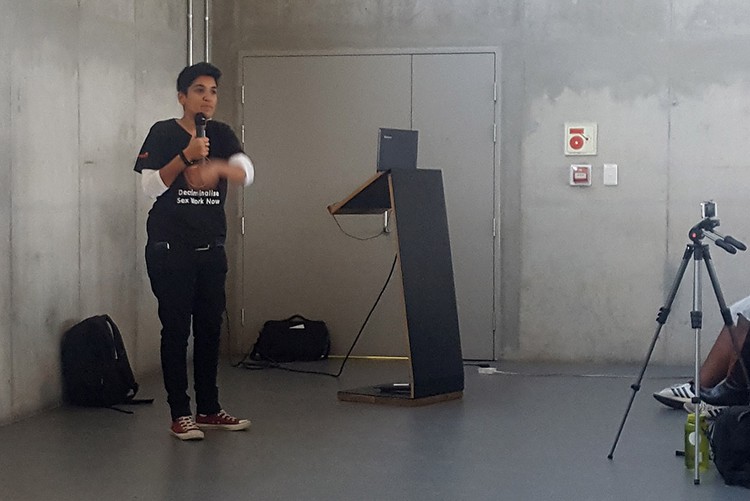 Police abuse of sex workers is a national problem, Ishtar Lakhani of Sex Workers Education and Advocacy Taskforce (SWEAT) told a meeting in Khayelitsha at the weekend. Photo: Mary-Anne Gontsana

Most sex workers in SA are mothers using the money from their work to provide for their families, yet the law makes them into criminals, Ishtar Lakhani of Sex Workers Education and Advocacy Taskforce (SWEAT) told a workshop in Khayelitsha on Friday.

About 60 residents from Khayelitsha, Philippi and other townships were attending the second day of the Social Justice Coalition’s third annual Policing and Social Justice Dialogue Series at the Isivivana Centre in Khayelitsha. The day opened with Lakhani presenting “Sex worker and policing – human rights challenges”.

She said police abuse of sex workers was a national problem. Sex workers dealt with torture, rape and assault, bribes, corruption, and unlawful arrests in their line of work. SWEAT received many complaints from sex workers about their treatment at the hands of police, Lakhani said.

An audience member, Mosuli Qhaba, said police should not violate people’s rights. “I support sex work and I advocate for sex work because I am also interested in buying sex. So if I want to buy sex then I should be able to, same as if someone wants to sell sex, they should be able to.”

Musawenkosi Ngcingane, also in the audience, said he did not understand the concept of sex work and why people were doing it, but nonetheless felt that sex workers should be protected by the law.

Another member of the audience, Siphiwe Tofile, said, “We should not discriminate and judge people who choose to do sex work, because there are women out there who ask for money from their boyfriends or other men for nice clothes and expensive hair – are they not sex workers?”

Lakhani pointed out that there was a difference between sex workers and women who received money from boyfriends. She said that what sex workers were doing was work.

CORRECTION: This article was edited to reflect the fact that Ishtar Lakhani is from SWEAT and not from Sonke Gender Justice as originally stated. GroundUp apologises for the error.