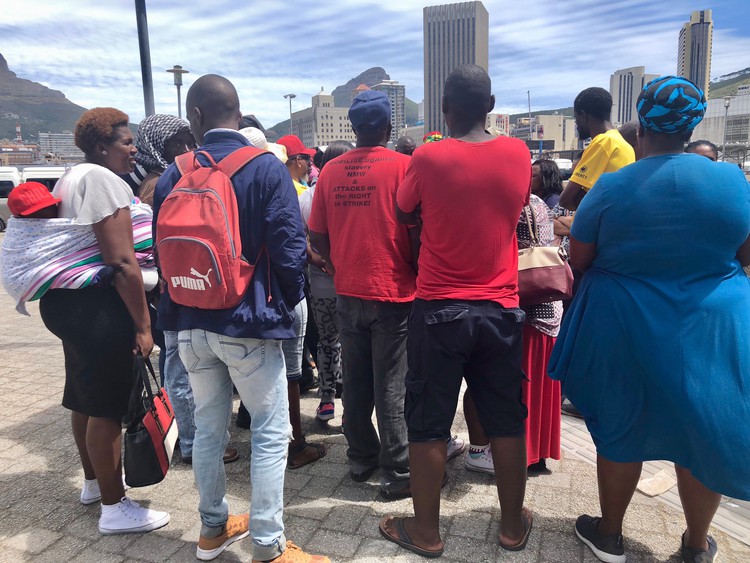 The MyCiTi bus operators told GroundUp that by moving up to the main entrance of the Civic Centre they were hoping that Mayoral Committee Member for Transport Councillor Brett Herron would address them. MATUSA members, who are cleaners for the EPWP, in yellow regalia joined the strikers, singing and dancing.

Mike Khumalo, a regional coordinator for MATUSA, said, “The reason why MATUSA is at the Civic Centre is because today there was supposed to be a meeting between the director of corporate services and the steering committee of the Metro EPWP, which the City didn’t honour. We are likely to be here tomorrow again.”

He said that EPWP workers have rights too, including joining unions, and they deserved to be treated with respect, and to have disciplinary hearings before they are dismissed from work, just like anyone else.

“The City of Cape Town should employ these drivers directly. How can you buy a bus, build infrastructure, but don’t want to employ a driver to drive your own bus? It is going to save money and improve the service,” said Khumalo.

The striking workers’ leader, Johannes Gordon, said they understand that their work is based on a “no work no pay” basis. “Everybody who is here knows that … Why must we worry when we know the money we are earning doesn’t make any difference? If I get money on the 25th by the 27th the money is finished already. If they pay me weekly on Thursday by Saturday the money is finished. We want to work for the City and get paid good money including benefits,” he said.

“This is a struggle; this is not just for us. We are doing it for our children and children’s children. We are paving the way; we [are] tired of exploitation,” he said.

He said that NUMSA had made an appointment for 9am with Herron, but the meeting didn’t take place. Herron only wanted to meet with NUMSA and the workers’ representative, without EFF, because they are a political party. But the strikers feel that the EFF should be included in the delegation to see Herron. “He is a politician and we want him to also deal with politicians,” said Gordon.

“We would like to make it clear to the public, especially journalists, that this is a MyCiTi workers strike. It’s just that we went to EFF for help. The majority of people who are here are MyCiTi workers. The solidarity is moving around; now fire fighters, cleaners working under EPWP, and SAMWU have joined,” he said.

In an article published on Thursday, Herron wrote:

As if the failing rail service is not enough of a challenge, on Monday morning, some MyCiTi bus drivers embarked on a wildcat strike. These workers are not City employees. They are employed by the vehicle operating companies (VOCs) that are contracted by the City of Cape Town to operate the MyCiTi routes. The City has entered in to 12-year agreements with the VOCs and we cannot simply insource or poach the employees of contractors with whom we have multi-year commitments. Such a proposal is also inconsistent with the national bus rapid transit programme for the transition and empowerment of the minibus-taxi industry.

The striking workers are represented by unions; their conditions of employment and remuneration are the subject of accepted collective bargaining agreements that were agreed to with their respective employers on 21 May 2018.

The strike is unprotected, meaning workers are placing their income, and even their employment contracts, at risk. I urge those who have embarked on this strike to rather work with their union representatives and use the structures and processes available to them to address any grievances or concerns they may have.

As GroundUp published, the City of Cape Town media office said it will be issuing a statement shortly.

UPDATE on 19 October: Shortly after publication of this article the City of Cape Town obtained an interdict against the striking workers. According to Herron: “The Western Cape High Court … granted the City an urgent interdict against the striking workers ​​preventing them from intimidating, harassing or assaulting MyCiTi passengers and staff; preventing them from damaging MyCiTi stations, depots or buses; and gathering at, or coming closer than, 100m to MyCiTi stations, depots or buses.”