Outside of legislative channels, civil society is also combating homophobia in various ways 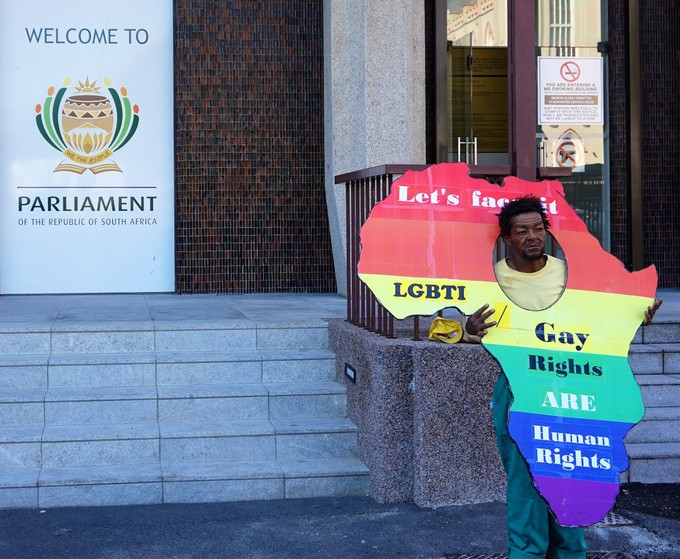 New legislation proposes to tackle crimes based on prejudice and hatred, but as Deputy Minister of Justice John Jeffery noted, legislation alone “cannot change the hearts, minds and attitudes of people”.

Educators, social workers and citizens have been working to change homophobic attitudes, targeting segments of communities where those attitudes are perpetuated.

In 2013, the Creare Training Centre, a Christian arts academy in Bloemfontein, came under scrutiny after claiming they could “cure” gay and lesbian students through “rehabilitation”.

They were found guilty of human rights violations by the South African Human Rights Commission.

“We have this beautiful commitment to freedom, and yet our schools talk about the ‘conversion of gays’ and pathologise gays and lesbians,” says Dennis Francis, Research Director at the Human Sciences Research Council in Cape Town.

“As much as the constitution talks about gender equality and such, nowhere do school policy documents use the words homosexuality or sexual diversity. There’s no explicit reference to sexual orientation,” says Francis. “Teacher education doesn’t deal with sexual diversity either, so they often aren’t prepared to teach it.”

His upcoming book deals with the problems around the teaching of sexual diversity in South Africa.

But, says Ndumie Funda, founder of Luleki Sizwe, an organisation that works with lesbian women in Cape Town’s townships, “The ‘no go’ areas are now ‘go’ areas … We’re engaging religious leaders and the Department of Education – areas that are not easy to penetrate.”

Funda said Luleki Sizwe has reached out to local schools to educate them on these issues in order to prevent children from dropping out because of bullying related to their sexuality. Funda said children often face intolerance from both fellow students as well as teachers who have trouble accepting them.

Life orientation, a compulsory section of school curriculums, is often the only area where sexual orientation is addressed, but it’s not addressed in all schools.

A University of KwaZulu-Natal study of four life orientation textbooks from Grade 7 to 12 found that the word “lesbian” was never used, and the books were largely silent on transgender and intersex identities. Sexual orientation was almost exclusively talked about in terms of identity development without talking about social justice or combatting discrimination.

“Our Life Orientation textbooks are woefully inadequate in their coverage of sexuality issues, especially same-sex and ‘non-normative’ sexualities,” says Lesley Wright, a teacher at Redhill School in Sandton, an affluent community in Johannesburg. “Most case studies and images used in any Life Orientation textbook still reinforce the norm of heteronormative relationships, nevermind the reinforcement of this in other subject material.”

Wright has been teaching for 13 years. She teaches 14 to 18-year-olds and is open with her students about her queer identity.

“I strongly believe that just being who I am is the best example I could set for my students,” she says.

Wright says her students and teachers have been largely supportive of her. While she works in a privileged school, she still sees problems with the teaching of sexuality.

Time constraints on curriculum limit how deep she can go into these topics, and at Redhill, sexual orientation is only covered during Grade 10 Life Orientation. Wright says teachers sometimes also find the topic awkward.

Despite that, she says conversations about sexual orientation in her classroom have been constructive. “The younger pupils are very often not familiar with transgender and sexuality issues, or even with the difference between sex and gender. They appear interested, confused sometimes, and question their own reactions and feelings to these conversations.”

Faith-based organisations are another community-level institution where conversations about homosexuality and homophobia are being tackled.

Most South Africans are religious, and homosexuality is an increasingly contested issue across faith groups.

“Some leaders are taking small steps towards recognizing LGBTI people in their congregations, but others are taking the fight against hate crimes five steps back. The greatest way they can help is through their sermons.”

Individual ministers, though, have made an effort to reach out to their queer constituents, and the head of the Dutch Reformed Church called on the church to remove the celibacy requirement for gay ministers and begin consummating gay marriages.

Muhsin Hendricks grew up in an Orthodox Muslim community in Cape Town, but always knew he was different, being teased from when he was five years old for being feminine. As he developed his sexuality, Hendricks said it was a lonely journey not being able to discuss it with anyone.

“There have been a lot of cases of violence in townships, but in the Muslim community we see more emotional abuse,” says Hendricks.

Drug abuse and suicides have been major issues for the queer Muslim community.

Hendricks married a woman who knew he was gay in an effort to appease his family and see if he could change. Six years later, he could no longer continue rejecting his identity, and he and his wife decided to divorce.

He said the dissonance between knowing his authentic identity and the mainstream religious discourse sparked his own interest in studying Islam more deeply and creating spaces for queer Muslims.

“Religion can be very judgmental,” he says. “I focus more on connecting to a single deity through embracing diversity, including sexual diversity.”

In 1998, Hendricks came out publicly and was fired from one of his teaching positions at a local mosque. He resigned from two others.

Hendricks now runs the Inner Circle, an organisation focused on helping queer Muslims embrace their faith and sexuality, and the People’s Mosque in Wynberg.

“Whether you’re gay, straight, a sex worker, anything, this place is open,” he says about the mosque.

Men and women pray together at the People’s Mosque, and women occasionally lead prayer and offer Friday sermons.

When it began, the mosque was almost exclusively visited by queer people but today Hendricks says half of the congregation is straight. In mainstream circles, Hendricks sees space for progress.

“The masses still have to shift, but we are seeing small changes,” he says. “A few years ago, you would hear clear talk that gay people should be killed for their sin, but now you see more of a ‘hate the sin, not the sinner,’ kind of discussion.”

Though small, these steps point toward change in slow moving institutions.