Municipality says land is earmarked for beneficiaries of de-densification programme 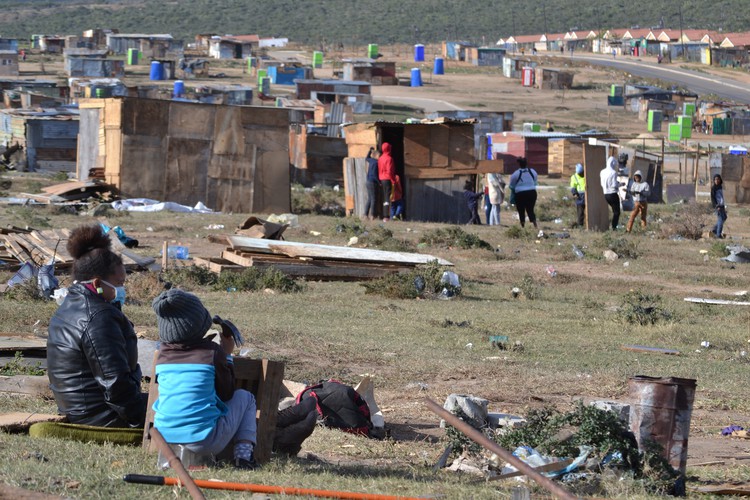 Over a dozen shacks were demolished or damaged when residents of Moeggesukkel informal settlement clashed with new occupiers on Thursday. Photo: Thamsanqa Mbovane

Over 50 families of Moeggesukkel informal settlement near Rosedale in Uitenhage were rendered homeless on Thursday.

This after a dispute between two groups over a piece of vacant municipal owned land in the area. It ended in one group breaking down structures belonging to their opposition.

One group claimed to have occupied the land since 2012 and has shacks next to blue toilets. This was later confirmed by the municipality. The second group moved to the area about a month ago.

The protest on Thursday apparently began when the residents from the first occupants demanded that the newcomers pay them R500 per plot. One of the newcomers, who refused to be named said, “We occupied this land a month ago and promised those living next to the toilets we will pay the R500, but we didn’t as most of us were not obliged to pay for the plots.”

Resident Ruwaida Witbooi who also moved onto the land a month ago said, “We saw people approaching us from the other side of the blue toilets. I lost everything as my shack was destroyed by these people. They pelted us with stones, ransacked our shacks and told us to go away from this land.”

Another resident Shereen Phillips said: “They came in the morning carrying pangas, crowbars and hammers. They stood in front of our shacks … telling us they were sick and tired of us and burnt tyres.”

But Nkosinathi Kika, who has been living on the land for several years, accused the newcomers of damaging their homes. This despite the fact that it was mostly the newcomers homes that were destroyed.

Police spokesman Sergeant Majola Nkohli confirmed that a group of people blocked Acacia Road in Kamesh with burning tyres and rubble “in what was believed to be a service delivery protest”.

Nkohli said a few hours later, members from the Public Order Policing and Visible Policing managed to remove the debris and opened the road. “The situation is now under control and police are patrolling the area. No case was opened,” he said.

Municipal spokesperson Mamela Ndamase said, “As a Municipality we condemn the acts of violence and the crime of land invasion. We have reported the crime to the law enforcement authorities.”

Ndamase said that land occupiers took advantage of the lockdown moratorium on evictions.

“They abused the National Disaster Act and saw an opportunity to illegally invade municipal land which was identified by the national Department of Human Settlements to bring some relief and to de-densify the Moeggesukkel informal settlement.”

Once the dispute is resolved, the City will continue its de-densification programme on the land with the rightful beneficiaries, she said.

Ndamase said the programme aimed to minimise the spread of Covid-19 in congested informal settlements. “Our Human Settlements department is currently managing approximately 123 informal settlements, most of which emanate from recent land invasions. Council has since resolved to formalise these settlements,” she said. Ndamase noted that illegally occupying land did not necessarily result in queue jumping over those already on the municipal database.

“Vulnerable groups living in informal settlements are being identified and allocated sites to create space between households. Sites will be serviced with water, sanitation, electricity, refuse removal with social amenities,” she said.