Supporters from all major political parties, including ANC, participated 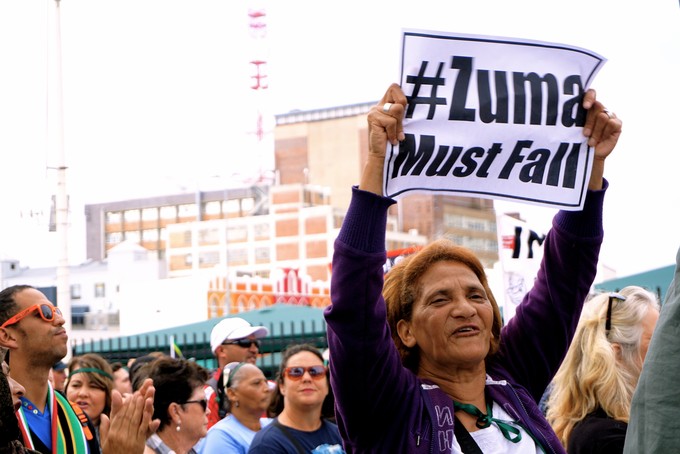 More than a thousand people marched through the streets of Central Cape Town yesterday to call for the resignation of President Jacob Zuma. Bringing together religious and political organizations, the #ZumaMustFall organisers hoped to maintain pressure on the president and rally supporters to reclaim their communities and their government.

“This campaign will not stop until the head of the rot is removed,” Reverend Richard Verreyne of the Evangelical Alliance of South Africa told the crowd.

Carrying signs and chanting slogans like “Zuma Must Fall,” and “Rise South Africa, Rise,” marchers rallied outside of Parliament on Freedom Day for speeches and musical performances. Calling on Zuma to step down, speakers voiced concerns about inequality, unemployment, corruption the economy and mining workers’ rights.

“Jacob Zuma represents everything that is wrong about South Africa,” said Brutus Malada, one of the speakers. “You can enjoy the swimming pool Mr. Zuma, but South Africa will rise.”

Several churches, Right2Know and an array of political parties were represented at the rally. DA, EFF, UDM, COPE, ACDP and a few ANC members wore their party colors in the crowd.

Much of the rally was religiously focused, with performances by a Christian music group and speakers appealing to God and religious values.

“Zuma is but one of our problems. Where are we when 22 kids are killed every day in Manenberg,” said Gloria Veale-Oliver. “We need to heal as a nation.”

Sudipa Balgobind, who carried a ‘Zuma Must Go’ sign, was attending her first such rally.

“He’s lost sight of what’s important to the country, and he’s not taking the needs of the people into account,” she said. “The only person who’s happy Zuma is president is Zuma.”

Balgobind said she hopes more young people will take up the fights that their predecessors fought.

Closing the rally, #ZumaMustFall event organizer Christelle Scheepers called on the public to get involved in their communities and seek real change outside of politics.

“We need to stop looking to other people to be our heroes,” she said. “We find ourselves in one of our darkest hours, and we have no real leaders. We are a proud constitutional democracy, and I don’t know where we lost our way. It shocks me to the core.”

ANC event in Limpopo much larger

More than 20,000 attended the ANC’s Freedom Day rally in Limpopo. Although the numbers far exceed those of anti-Zuma marches, Scheepers told GroundUp this is not surprising.

“The ANC has been around for over a 100 years with millions of supporters. We have only been around since last year,” she said. “The ANC rally had a bad turnout, comparatively speaking.”

There were several #ZumaMustFall protests around the country yesterday.