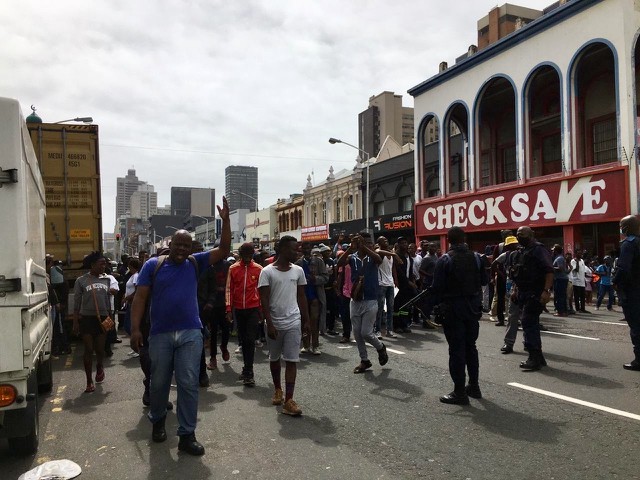 The All Truck Drivers Foundation and MK Veterans marched through the streets of Durban demanding that no truck with a South African registration should be driven by a foreign national. Photo: Nokulunga Majola.

On Monday members of the All Truck Drivers Foundation and the UmKhonto WeSizwe Military Veterans Association (MKMVA) marched in Durban, calling for foreign nationals to be deported.

Dumisani Ngcobo, treasurer at the Durban branch of the All Truck Drivers Forum, said they submitted a memorandum to the Transnet Port Authority at Bayhead Road entry point with an ultimatum that no truck with a South African registration should enter the harbour if driven by a foreign national after 1 December.

Five people were arrested for public violence during the protest and will appear in court soon, according to KwaZulu-Natal police spokesperson Captain Nqobile Gwala.

Two weeks ago, MKMVA members closed down foreign-owned businesses in the Durban city. A number of people were injured and shops were looted.

Daniel Dunia, executive director of the Africa Solidarity Network, said, “We need xenophobic MK veterans who are involved in criminal activities of looting, intimidation, harassment, to be arrested and face the might of the law. We need eThekwini Municipality to intervene and address the situation and we need the ANC to call their comrades to order.”

Garemu Askowu, who has a shop in Pine Street, said immigrants were living in fear. His shop was looted two weeks ago by MKMVA members.

“These people are living better lives than many South Africans in our own country,” said Zibuse Cele, MKMVA convenor. “They are getting benefits like social, pension and disability grants when many of our people are getting rejected. South Africans must be top priority in everything because this is our country”

“We have qualified people who are unemployed and students who are looking for jobs but they are not getting opportunities because jobs are given to foreigners,” claimed Cele.

He blamed homeless people who joined the protest for the violence and looting and he claimed they had acted in this manner because they were on “drugs brought by foreigners”.

MKMVA KwaZulu-Natal provincial chairperson Themba Mavundla said, “When we were fighting for our country, we went to other African countries where we were placed in camps but we didn’t own businesses like they do in this country.”

In a statement, KZN Premier Sihle Zikalala appealed for calm and a peaceful resolution to the concerns of truck drivers. He said the Department of Labour and Home Affairs are currently involved in a process of developing legislation that will address employment of non-South Africans in all sectors of the economy, including road freight.

“We must however reiterate that we will not allow lawlessness to threaten our economy, more so as we emerge from the economic crisis caused by the Covid-19 pandemic. We thus call on those who have grievances to work with us and not to shut down our roads, torch trucks or even resort to attacking truck drivers as has happened before,” said Zikalala.