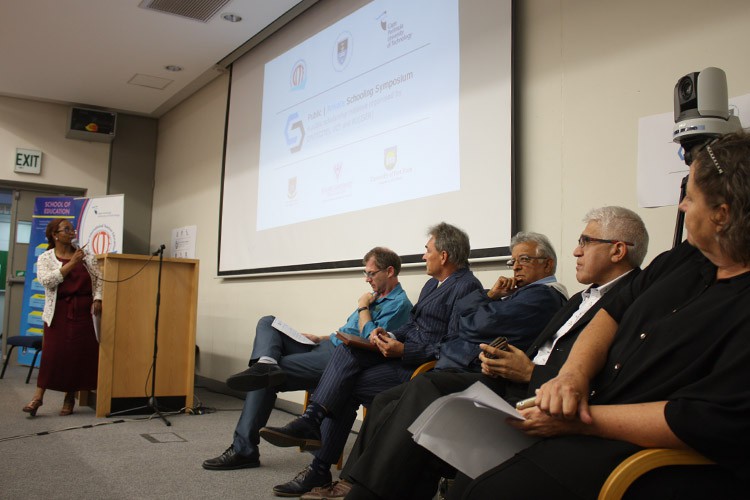 Representatives from CPUT, Curro, the University of Fort Hare, DG Murray Trust, UCT and the Department of Education participating in an open dialogue on the state of South African schooling. Photo: Trevor Bohatch

Representatives from the Cape Peninsula of Technology (CPUT), Curro Holdings Ltd, the University of Fort Hare, DG Murray Trust, the University of Cape Town (UCT) and a former Western Cape Education Minister participated in an open dialogue on the state of South African schooling, and the place partnerships with the private sector held in the systems’ future.

The event was hosted on CPUT’s Mowbray campus by the university’s Centre for International Teacher Education (CITE) on Thursday.

David Harrison, CEO of DG Murray Trust and an advocate of public-private partnership schools, said that by 2030 public schools would be in dire straits. “One in two children entering Grade R now will have dropped out by then. The independent sector will break free and will get much larger… public schools will be viewed as where poor kids go to,” he said.

Harrison said that 80% of public schools in the country were under-performing.

But CITE founding director, Yusuf Sayed, said: “The evidence is mixed and not clear cut.”

The discussion follows the launch earlier this year of the Western Cape Schools Collaboration Initiative, a pilot programme designed to test mixed funding for “collaboration schools.”

The model, according to a newsletter written by Western Cape Premier Helen Zille on 9 March 2016, is based on the Academy School system in the UK and attempts to bring together the Department of Education, private donors, schools and education non-profit organisations to provide learners with the best education possible.

Harrison said that collaboration schools would be the most effective way to make change.

Collaboration schools rely on public and private funding, teachers who are employed on performance-based contracts and outside non-profit partners which control at least 50% of each school’s governing board.

“We live in a time where public-private partnerships are becoming fashionable again in spite of all the evidence that they have not been particularly successful in fulfilling their own promises,” said UCT senior lecturer Heather Jacklin.

Jacklin said that school reform could not entirely be conducted on a site-by-site basis as the collaboration school project aims to do.

“Sustaining improved practice depends very much on the relationship between the school and the system,” she said.

Van der Merwe said the quality of schooling “isn’t necessarily derived from money” but rather “the relationship in the classroom between the teacher and the child.”

Curro Holdings is the parent company of a 127-school, for-profit network in South Africa. The company is listed on the Johannesburg Stock Exchange and currently valued at R400 million.

Van der Merwe said bringing private investors into education would be a “win-win” situation. “You’ve got the support of the shareholder. Using the shareholder’s money you can provide the community with a centre of excellence,” said Van der Merwe.

Former Education MEC Yusuf Gabru said that he did not discount the potential benefit of outside assistance in raising the standard of education.

“I think that we should not be intimidated into accepting any solution because this present education system is so poor. My own view is that it’s the state’s responsibility to provide education. It’s our responsibility to make sure that the state does that… We really should get the state to do its job,” he said.