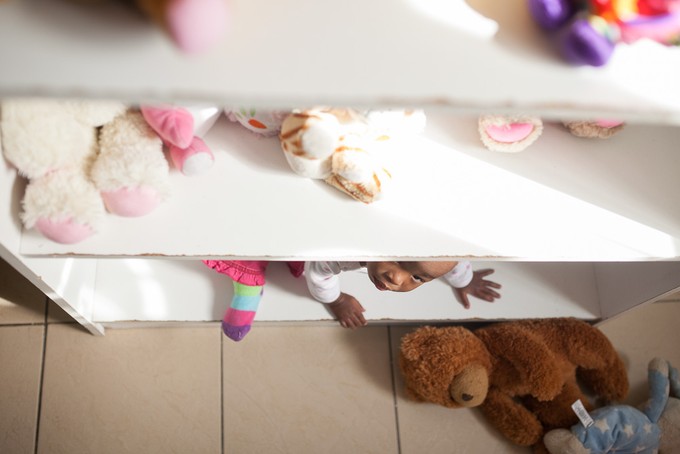 The Baitul Ansaar Child Care Centre is an emergency placement centre that is currently housing approximately 20 children aged 0 to 11 years. The majority of the caregivers working at the centre are from the surrounding Mitchells Plain area.

As the head of the medical department at Baitul Ansaar Child Care Centre in Mitchells Plain, Samantha Wilson must make sure the approximately 20 children there receive the proper medications. Some are on antiretroviral treatment, others must have skin-care medications applied - all at different times.

Children from birth to 11 are placed at the emergency care centre by external social workers or the parents themselves. Children arrive at the centre as a result of abuse, abandonment and neglect, among other reasons. The staff of about 20 — on day or night shifts — look after them until the children can return to their parents or be placed in foster care.

The centre generally looks after 42 children at a time. It is a privately funded non-governmental organisation.

Although they are supposed to only stay for three months, most stay on average for more than a year.

Wilson rushes across the tiled floor, arms out for balance, and walks into a room full of infants. Three years ago, when she started working at the centre, she was different, less confident in herself, she says.

With a burping baby slumped on her shoulder, she speaks of her life as a heroin addict before she began working with children.

“The love for what I’m doing has kept me sober. I’m not relying on the children, but it helped,” she says, adding that while she still gets cravings, she turns to her colleagues who talk her through those times.

“These babies mean a lot to me. This job means a lot to me,” she says.

Wilson herself was given up at birth and she relates to some of the children at the centre that are going through similar situations. She never had a relationship with her father “because he chose not to have a relationship,” she says, adjusting the beanie on the top of her head. “When I hold them, when I play with them, when I meet a new child, I can just imagine the fear, the insecurities, the uncertainty of the child.”

There are about 3.7 million vulnerable children in South Africa on record, said Bushra Razack, managing director of the centre. These children are placed in an orphanage, in a children’s home or in foster care.

Nasmey Benjamin, who is a part of the centre’s day staff, helps take some of the children to doctor’s appointments in Mitchells Plain when necessary. At around 7:30 am on 30 May, she packs 14-month-old Nosipho* into a car for a dermatology check-up. Nosipho has been at the centre for three months, and is staying there while her mother finishes her studies.

At first glance Nosipho does not appear to have eczema, but there are small bumps on her joints and on the top of her head. Benjamin wheels Nosipho—clad in pink Velcro shoes and a pink hooded sweater—into the crowded clinic on a stroller, as Nosipho stares wide-eyed and wide-mouthed at the long queues of people.

After four years of working at the centre, Benjamin, a single mother, says she leaves her own problems at home because the children’s are often bigger.

Around the same time Benjamin began working there, a child named Caleb* arrived. “I don’t know how it happened, I just fell in love with this child,” she says.

When Caleb’s time at the centre was finished, he could not go back to his parents, who are addicted to drugs. Eventually, Benjamin’s mother fostered Caleb, who is now four. Benjamin’s own son and Caleb are now as close as brothers, she says.

Each one of the children “holds a special place in your heart. You get used to a child, and then the child must go away,” she says.

Since she started working there in 2013, Tabitha Mabaye, the resident social worker, has seen only two children placed back with their families. Family reunification hardly happens, and children have to be placed in foster care or in another children’s home most of the time, she said.

Although the centre is currently funded by private individuals, Razack believes it will receive government funding in the future because it already complies with government standards and requirements, she said.

The biggest challenge for Razack is deciding how best to accommodate the school-going children. “If your family can’t look after you, you have to come to us. Imagine all the drama you’re going through and now we’re going to move you from your school and put you in a school here,” she says.

Most of the time children come with siblings. “If a care worker calls and says, ‘We have a 16-year-old and a three-year-old,’ we realise immediately we’re not going to be able to give that family the best possible care because we don’t have any caregivers trained to deal with the problems that come with abuse and neglect in a vulnerable 16-year-old,” she says.

“If push comes to shove, we’ll take that child, but it highlights how difficult it is to keep the family together,” she says.

The Mitchells Plain area has the highest level of “granny-headed” households in the Western Cape and one of the highest murder rates in the country, Razack says. In 2015 it had the highest number of reported total crimes and drug-related crimes in South Africa, according to Crime Stats SA. The children have been trained to handle any incident just outside the centre, Razack says.

Many of the staff members are from the area, including Wilson and Benjamin.

“There’s no way that the kids would open up as quickly as they do without our staff,” she says.

*Names have been changed per Baitul Ansaar’s child protection policy.