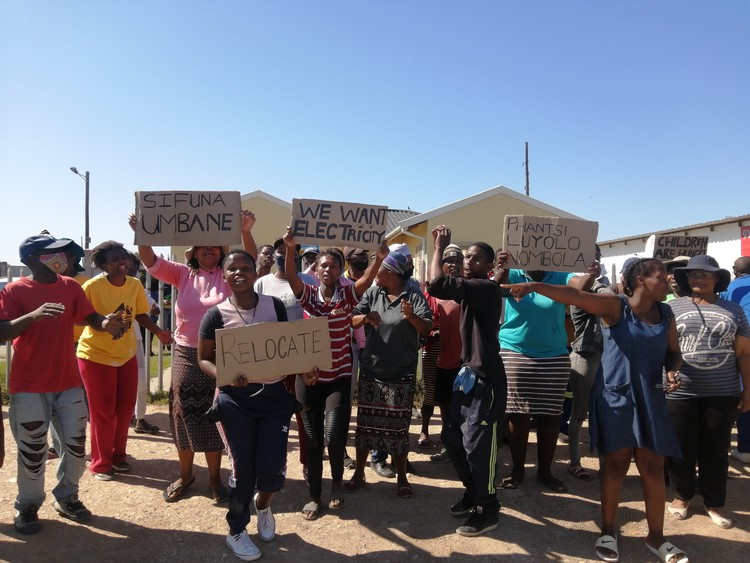 The protest follows the recent removal of most of the illegal connections from poles meant for neighbouring RDP homeowners from Boesak’s Ground.

The trouble began on Tuesday night when one of the main electrical poles in the area became overloaded and exploded as a result of the webbing izinyoka lines. This left nearly 200 households in the dark. While power was restored on Wednesday, residents from the RDP houses decided to remove the illegal connections.

At 4am on Friday, a group from the informal settlement responded by closing the road with burning tyres and rocks. Public Order Police were called to intervene as protesters approached the ward councillor’s office, accusing him of ignoring their pleas for services.

The area was established four years ago and has 628 households.

Thembisa Brukwe from the informal settlement said they have been at loggerheads with the homeowners who have been foiling each of their attempts to reconnect the izinyoka lines. “The RDP homeowners refused [to allow reconnections] and threatened to burn down our shacks. I couldn’t sleep last night in fear of being torched in the house with my mother who is 82,” she said.

Mfundo Sifile, 39, said: “We are unemployed and most of us survive on social grants. The homeowners want us to rent our illegal connections for R250 a month. They even pelted us with stones as we tried to reconnect.

“We need electricity like all other informal settlements in this municipality. Paraffin is too expensive. It’s R15 per litre and kids are hungry at home. We couldn’t cook for them since Tuesday. Now we are getting these threats,” he said.

Anelisiwe Dyubele who lives in front of the damaged electrical pole said: “We cannot be bullied by these shack dwellers. My mother, who is 72, has been traumatised ever since the pole exploded. They never asked for permission to connect. … Their connections are a danger to us and our children. We won’t allow them to connect here again.”

Another homeowner Vuyokazi Stoti denied that they had threatened the informal settlement residents. Stoki said they merely removed the cables and told them not to connect directly to the area’s transformer.

Ward 31 councillor Luyolo Nombola (ANC) said over 200 houses were affected by the explosion on Tuesday. He said officials from the Infrastructure, Engineering and Energy department will meet community leaders on Monday.