At Cosatu's demand of R4,500 per month, we risk increasing unemployment 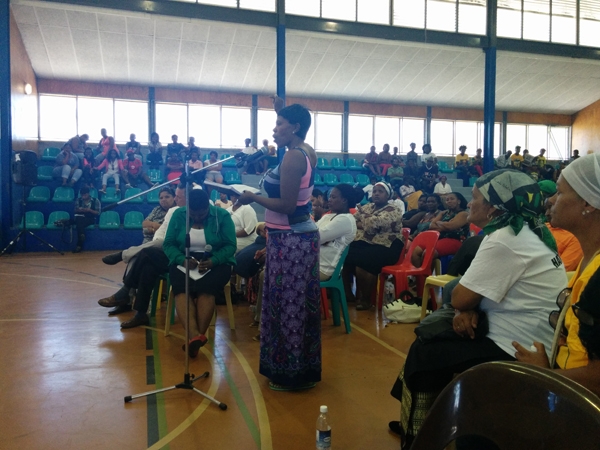 Phaphama Ngcibi expresses her views on a national minimum wage at a meeting in Gugulethu in 2014. Photo: Katy Scott

Unfortunately, many of the panels did not reflect the full range of analyses of the NMW.

Neither of the key government departments – the Department of Labour and Treasury – nor organised business participated, ostensibly because they do not want to engage in public debate outside of the ongoing closed-doors process in NEDLAC, but perhaps because the NMW-RI is seen as being linked to Cosatu.

Cosatu was therefore the only social partner to presents its case in detail. Alternative scholarly voices were conspicuously absent from some panels.

Diverse views on the level of a NMW

There was no agreement, however, on the tough question of the level at which a NMW should be set, the exemptions that should be permitted, the procedures to be followed with respect to both the level and exemptions, and the factors to be taken into consideration through these procedures.

Visiting speakers from outside South Africa provided valuable analysis of the experiences with NMWs elsewhere in the world. Studies of the UK, Latin America, Malaysia and Germany showed that NMWs set at modest levels, taking into account likely employment effects, seem to have had no effect on employment while raising significantly the wages of the lowest-wage workers (although in the cases of Germany and Malaysia these are very preliminary findings, given that their NMWs were introduced in 2013 and 2015 respectively).

In these cases, predictions of economic apocalypse made by some business groups proved to be mistaken.

In Germany, the UK, Malaysia and Brazil, the NMW was set at between 50 and 60 percent of the median wage, covering directly or indirectly about 15% of workers. These were set through institutional procedures that took very seriously possible effects on job destruction.

The lesson of these experiences is that a NMW set at a modest level in economies with tight labour markets (i.e. a strong demand for labour) helps the working poor.

Should South Africa leap into the unknown?

What should South Africa learn from these foreign experiences about the appropriate level of a NMW? Most of South Africa’s existing sectoral minima are already higher in relation to median wages and together cover a larger proportion of workers than in any of these other countries (although they do not cover all low-pay workers, hence the need for a national minimum).

Cosatu’s proposal to set a NMW more than double most existing sectoral minima would be a massive leap into what is (at best) the unknown. COSATU proposes a NMW that would affect directly more than 60% of workers and be substantially higher than the current median wage in South Africa.

And, of course, this is in an economy where the demand for unskilled labour has been falling steadily, resulting in an unemployment rate that is eight to ten times higher than that of either Germany, the UK, Malaysia or Brazil (until this year). In South Africa the working poor comprise a much smaller proportion of the poor than in any of these other economies.

It seems that no other country in the world has ever embarked on such a massive hike in minimum wages to such a high level and covering so many workers.

Several international speakers at the symposium suggested that NMWs were sometimes set too low. British economist Alan Manning suggested at the symposium that the British Low Pay Commission might have more boldly raised the UK’s NMW from about 50% to about 60% of the median wage. German trade unionist Gabriele Sterkel reported that her trade union ( ver.di) was pushing to raise the German NMW from €8.50 to €10/hour, which would be less than 60% of the median wage. Manning and others insisted that raising the NMW above an ‘appropriate’ level would result in job destruction, and they implied that this level was not much higher than the modest increases they proposed.

In the absence of international experience of massive increases in minimum wages to the level proposed by COSATU, we might turn to econometric models that predict the effects of hypothetical levels of a NMW on employment, poverty and so on. The NMW-RI’s macroeconomic and household distribution model was presented by its designer, Asghar Adelzadeh, who flew in from the USA. Adelzadeh reported that his model predicted that a high NMW would boost the economy, although it would have no significant effect on the employment and unemployment rates.

Adelzadeh’s model suggests that South Africa should be more confident about doing what no other country has ever done and leap into the unknown of a very high NMW. These results contradict the predictions of other models developed by the National Treasury and various other scholars (including left-wing scholars) in the past. Unfortunately, the panel did not include anyone with the expertise in macroeconomic modelling required to engage seriously with Adelzadeh.

The model does generate some results that are clearly very odd. For example, the model assumes that higher wages will result in higher productivity, despite slowing down the growth of investment and rendering the economy less dependent on capital. Higher productivity would, the model apparently predicts, in turn lead to higher manufacturing exports, which will surprise observers of sectors such as clothing manufacturing in South Africa (where higher minimum wages have undermined South African competitiveness). It is not clear why higher wages and productivity would automatically result in higher output rather than the same output being produced by fewer workers.

Even more curiously, Adelzadeh’s model predicts that poverty among the poorest income quintile will drop, even without any increase in employment. This makes no sense: three out of four ultra-poor households have no working members and will not benefit at all from wage increases (as Arden Finn showed at the symposium), whilst the minority of ultra-poor households with a working member are very likely to lose their jobs if their employers are required to raise their pay from something like R500/month to the level (about R4,500-5,000/month proposed by Cosatu).

It is not clear that the model considers the inflationary effects of high minima and how this might affect the real incomes of the poor, worsening the poverty of the unemployed. All of this suggests that the model’s linking of macroeconomic trends with the distribution of real household income is flawed. Those of us who are sceptical about economic modelling will worry that this model is no more likely to be a good guide to what would actually happen than other models that predict that a high NMW would lead to massive job destruction.

Job losses and the effects on the poor

Does South Africa’s own past experience shed any light on the consequences of different minima? Ben Stanwix summarised studies of the effects of sectoral minimum wages over the past fifteen years, suggesting that South Africa’s sectoral minima until now have led to or threatened job destruction in some tradable sectors (notably agriculture and clothing manufacturing), but do not seem to have done so in some other sectors (such as domestic work).

This suggests that policy-makers should worry a lot about a high NMW leading to massive job destruction especially in sectors exposed to international competition. Unfortunately there was no discussion of how and why sectoral minima in South Africa have been set at mostly modest levels – far below the level proposed by Cosatu – by both the Employment Conditions Commission and by employers and trade unions in bargaining councils.

Arden Finn also presented work that showed that even a NMW of R2,500 might affect 30% of workers, making a potentially major difference to the incomes of the ultra-poor (though he explicitly did not consider the potential costs to these workers if jobs are destroyed). The symposium presented no strong evidence, however, on the likely effects of a modest or a high NMW on these working poor.

One of the weaknesses of the discussion was the lack of close analysis of precisely who are the working poor. Some speakers spoke passionately about the unjust wage differentials between grotesquely overpaid CEOs and ordinary workers in companies like Lonmin. Given that the symposium was on the NMW, this gave the impression that speakers imagined that a NMW would redress this injustice.

This is nonsense. Not even the high NMW proposed by COSATU would make any difference to the earnings differentials within Lonmin or most large firms.

Too many speakers seemed to believe that the working poor are employed by large national or multinational companies earning super profits.

In reality, the working poor comprise workers such as employees in spaza shops in shack settlements and rural areas, drivers and conductors in minibus taxis, the domestic workers employed by lower middle-class and working class households, and farm workers in the more marginal agricultural sectors.

These are typically low-wage workers employed by low-profit, small (and overwhelmingly black) employers. This is important in terms of the feasibility of enforcement. It might be logistically possible and politically feasible to target non-compliant white, Chinese and Indian employers, but it is far from clear that it is either logistically or politically feasible to target non-compliant small black employers.

What are the alternatives?

Focusing the symposium on the NMW specifically meant that there was no analysis of how an NMW compares with alternative ways of reducing poverty and inequality. For example, instead of trying to redistribute from low-profit employers to their low-wage workers, a truly progressive position might be to redistribute from rich taxpayers to the poor unemployed through job creation, including through an employment guarantee scheme along the line of India’s massive National Rural Employment Guarantee Scheme.

Perhaps future symposia will facilitate more critical discussion of some issues such as these.

Jeremy Seekings is a professor at the University of Cape Town. Much of his work on minimum wages has been written with Nicoli Nattrass. Their criticisms of the Cosatu proposals are available through CSSR Working Paper 362 and in a series of articles on GroundUp. Their most recent book Policy, Politics and Poverty in South Africa was published in 2015.

View expressed are not necessarily GroundUp’s.

See also Gilad Isaacs’s article on why an NMW will be good for South Africa.