Millions of rands of housing materials dumped since 2018

Councillor blames disagreement in the community 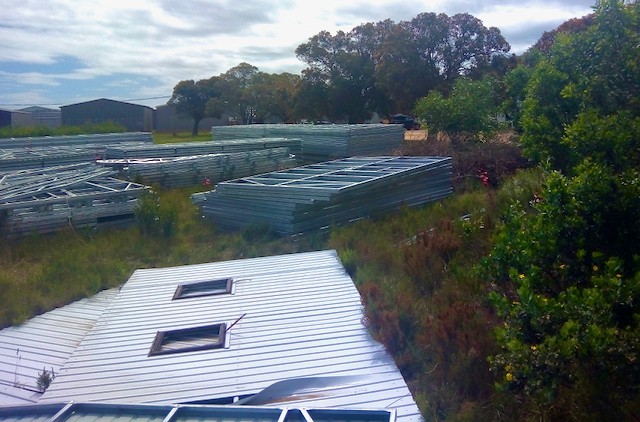 Almost R4 million worth of temporary building material has been lying unused on vacant land at the airport in Plettenberg Bay since 2018. Photo: Siphokazi Mnyobe

Almost R4 million worth of temporary housing building material has been lying unused on vacant land at the airport in Plettenberg Bay since 2018.

The material was to be used to create a Temporary Relocation Area to house 71 households, whose homes were gutted by fire in June 2018.

The fire destroyed 39 shacks in Kurland, 26 in Qolweni, four shacks in Kwa-Nokuthula and two RDP houses.

Bitou Municipality applied for housing assistance to the national Department of Human Settlements.

Treasury allocated R3.9 million to the Municipality Emergency Housing Program for the establishment of the Qolweni and Kurland Transit Camp (TRAs).

Meanwhile the Bitou Municipality had already supplied emergency materials for fire victims to rebuild their shacks.

The units provided by the department and funded by Treasury were instead dumped on vacant land near the airport.

Two families who lost their homes in the fire in Zaziwa, Kurland, told us they had not received zinc sheets from the municipality, and could have benefited from the materials dumped at the airport site.

Also neighbours, who had received material to rebuild their shacks, said it was insufficient, and they had to scrounge for more.

Nogudile Nogemani, from Zaziwa, stays in her daughter’s two-room home built from recycled material and wood she collected. Her leaking roof is made from one of the zinc sheets burnt by the fire.

“The electric meter box was destroyed during the fire,” she says. She now cooks on an open fire and uses paraffin and candles for light.

Nolufefe Mabona, who also survived the fire, says: “I am still recovering … I am unemployed, so my house is empty with no furniture. My child and I sleep on the same bed.”

“I had to make use of the old zinc burned by the fire and reuse it. I lost my identity documents, my child’s birth certificate, SASSA cards and winter clothes. It was hard to get new documents for myself and my child.”

Ward 1 Councillor Jessica Kam-Kam (DA) said, “After the [shack] material was delivered to the people in Kurland and Qolweni the municipality applied for funding from the Department of Human Settlements for Emergency Units.

“When the new TRA’s [emergency units] … arrived in the community, conflict occurred between community members who lost their shacks to fire previously, and they wanted to understand why these [new fire victim] residents would be provided with material twice, and why is it only them,” she said.

She said the community took a decision that they won’t accept the materials.

She said the municipality then decided to make use of the structures for Kurland residents registered to get RDP houses, but the residents refused, saying they would only move from their shacks into RDP houses, not to a TRA.

Kam-Kam said it was proposed that the structures could be used for people living in unbearable conditions.

Bitou Municipality has not responded to our questions.