Mfuleni parents storm out of meeting with education department

Parents and principal say new school was promised for 2017, while officials say they must wait until 2021 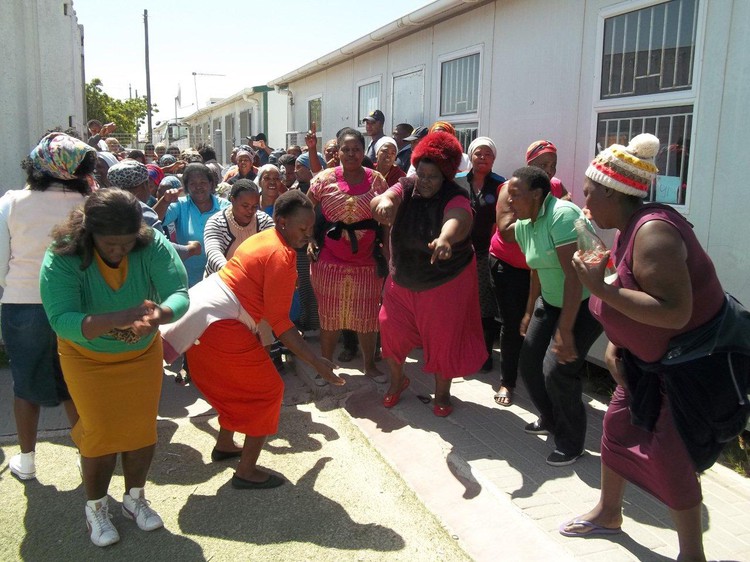 A senior official from the Western Cape Department of Education angered parents at a meeting held at Bardale Primary School in Mfuleni yesterday when he told them the department would build a proper school for their kids in 2021.

Tau Matseliso, Deputy Director General of Institutional Development and Co-ordination, said: “The construction of the school is scheduled for 2021. We have an infrastructure plan. It takes four to five years to build a school.” He told the parents that there are hundreds of schools across the province that experience vandalism and theft and that need to be built.

He said the department receives about 18,000 learners from other provinces yearly, and this trend has forced the department to build more schools. [GroundUp has been unable to verify this claim. - Editor]

Earlier this week GroundUp reported on parent dissatisfaction at the school because it is made out of prefab materials. Children are inadequately protected from both very hot and very cold weather, and the school has had desks and chairs stolen. The school has been in the news frequently because of inadequate space.

Dispute over promise of new school

But former ward councillor Themba Honono said the Chief Director of the district had promised to build a new school in 2017. “The department made a commitment while I was still a councillor to build the school now. I’m shocked that you mention 2021,” he said.

Honono said he used to have documentary evidence of the promise, but it burned when residents torched Bardale Community Hall during a service delivery protest. “What happened to that plan? Please go to your records and check,” he said.

Principal Ntombiyosindiso Mangcoto agreed with the former councillor. “The department promised to build the school this year. The change of the date comes as a shock,” she said.

But Western Cape Education Department’s Jessica Shelver said, “We are not aware of [the Chief Director of the District] promising the community a new school, but I can add our officials do not promise schools. The WCED works off of a User-Asset Management Plan,” she said.

Shelver said she asked both the district and the infrastructure departments about the promise to build a school in 2017. She said that in 2015 the WCED identified the need for a new primary school and high school in Mfuleni, but no funding was allocated because there has been no site to construct the schools. “These were identified as new schools and not the replacement of Bardale Primary School and High School,” said Shelver.

Chief Director of District Alan Meyer told parents to take responsibility for the safety of their school. “Parents must volunteer to make sure the school is safe,” he said

Meyer asked the parents not to look the other way when thugs vandalise the school and steal school property. “It’s somebody from the community. We turn and say we don’t see what happens,” he said.

He said electricians had inspected the school and they would instal lights and electricity and redo the wiring on Monday.

Meyer told parents that the department had already spent half a million on improving safety at the school and buying new burglar doors and other items.

“Guards would be here day and night and we will speak to SAPS to send more vans and spend more time patrolling around the school,” said Meyer.

Mzikayise Moni said the department must brace itself for spending more money if it doesn’t replace the damaged fence at the school. “Go to the minister and president and tell them that we are tired of this prefab school,” he said. “When we take responsibility for the safety of the school, catch the thugs and punish them, the police arrest us.”

Parent Nomawethu Nombewu angrily asked Meyer when he would install a new fence and build a new school.

Parents then lost their tempers and stormed out of the meeting, singing: “Voetsek King. We want our school.”