“There is no secret to success. It’s about preparation, hard work and learning from failures.” 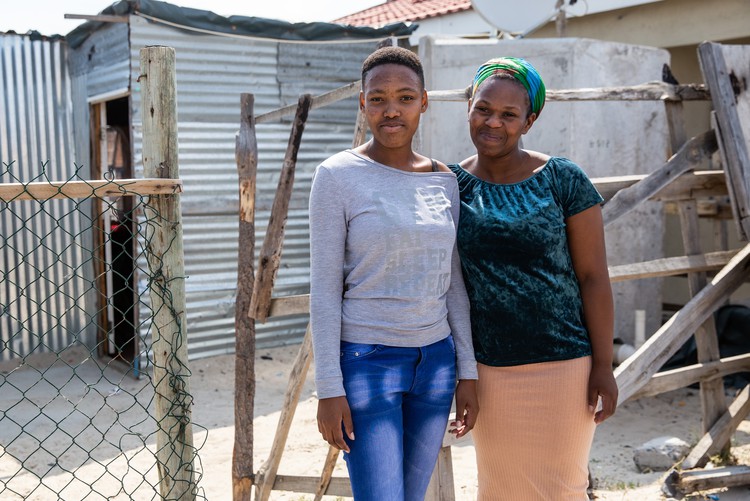 Lerato Ruth Sihlangu and her aunt, Noncedo Mlilwana, outside their home in Mfuleni. Sihlangu matriculated among the top of her year at Masiyile High School in Khayelitsha. Photo: Ashraf Hendricks

For at least a year 18-year-old Lerato Ruth Sihlangu walked two hours from school back to her home in Mfuleni. She arrived at about 6:30 pm, 12 hours after taking the morning bus to school. Sihlangu then cooked supper for her family before starting her homework. She got to bed “around midnight everyday” and said that during exams it would be closer to 3am.

Despite this, Sihlangu matriculated as one of the top learners at Masiyile High School in Khayelitsha. She got two distinctions — for Xhosa and Life Orientation — and a bachelor’s pass.

Sihlangu grew up in Sterkstroom, a small town in the Eastern Cape, with her mother and two brothers. “I was raised by a single mother. She was unemployed so we didn’t have money to buy stationery and things. I would always reuse my book covers until Grade 9 when I moved to Khayelitsha.”

While adjusting to life in a new city and school, Sihlangu says she was again uprooted when she moved to Mfuleni where she lives in a shack with her aunt and two cousins. “The most difficult challenge I faced in high school was having to travel home from school in Site B,” said Sihlangu.

In order to achieve her dream of pursuing a career in science, Sihlangu attended extra lessons after school every day. She says most days classes ended at 4:30pm and by then, the last bus home had left. “I had to walk two hours back home, then cook supper before I could start my work,” she says.

Sihlangu says her mother and aunt often motivated her to work hard and focus on her studies. She is passionate about physiotherapy and psychology and would like to study Occupational Therapy at Stellenbosch University or the University of Free State this year. She has not heard back from either of the universities yet.

“Every time I faced a major obstacle and started losing hope, I looked back on my journey for inspiration. There is no secret to success. It is the result of preparation, hard work and learning from failures,” she says.