Another chaotic day trying to get to work in Cape Town 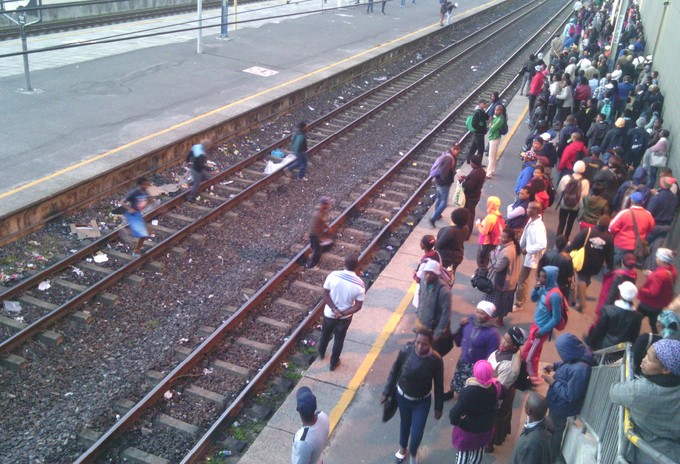 There was confusion over which platforms the trains would arrive at, so people frantically jumped onto the tracks to cross platforms in order not to miss their train. Photo: Bernard Chiguvare

In the third of a series of short reports, Bernard Chiguvare describes his daily battle to get to work using Metrorail.

On Monday and Tuesday I was delayed because of Metrorail. Today followed the same pattern.

I always start the day by checking Metrorail’s website. Today it announced major delays on the central line due to vandalism and arson. Delays of 40 to 50 minutes were expected. A colleague of mine who takes the Southern line to work at GroundUp was delayed in Steenberg where a man was knocked and killed by a train.

This morning I arrived at Nyanga Junction at 6:58 am. Two fully packed trains heading for Cape Town arrived at 7:06 am and 7:09 am. They did not stop.

At 7:21 am a train from Khayelitsha to Cape Town stopped but I could not manage to push my way on. I had to let it go.

Because of confusion over which platforms the trains would arrive at, people were jumping onto the tracks to cross from one platform to another.

I managed to squeeze onto the 7:48 am train. It arrived at Salt River at 8 am.

Metrorail announced that the 0135 train from Cape Town to Retreat had been cancelled for technical reasons and the next train would be at 8:16 am. But it actually arrived at 8:22 am. I arrived at the GroundUp office in Rondebosch just before 8:50 am.