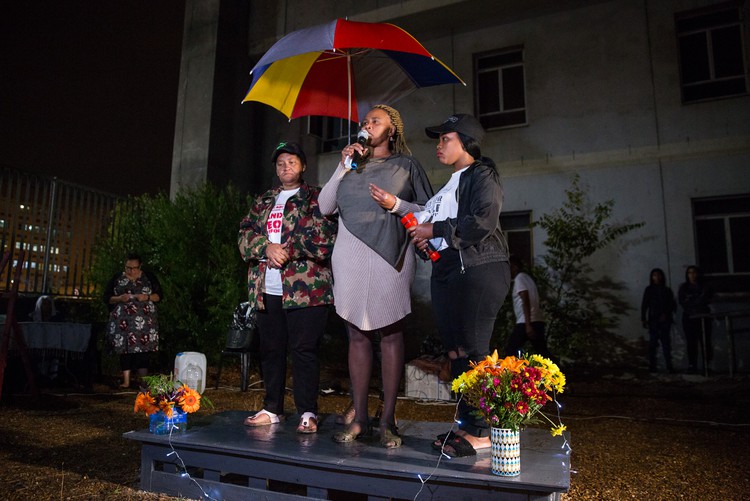 “Rasta” Dolophini’s fiance Elizabeth Gqoboka (centre) delivers a speech during his memorial. Alongside her is her daughter Beverley Gqoboka (right) and her friend Mona Asher. Photo: Ashraf Hendricks

By Rebecca Redelmeier and Kamilah Tom

Friends, family members, and comrades of Zamuxolo “Rasta” Patrick Dolophini gathered to remember the life of the slain activist at a memorial service on Wednesday evening.

The ceremony, attended by more than 200 people, took place in the the courtyard of the Helen Bowden Nurses Home in Greenpoint, where Dolophini was fatally stabbed, allegedly by a security guard, on 18 March.

Dolophini, 50 at the time of his death, was a member of a group of protesters who had been occupying the home as part of a campaign by Reclaim the City (RTC), which advocates for affordable public housing in Cape Town’s inner city.

Elizabeth Gqoboka, Dolophini’s fiancé who he had met while occupying the home and RTC Sea Point chapter’s spokesperson, told the crowd about Dolophini’s contribution to the movement as both a leader and friend.

“He stood up for his rights and fought for everyone,” she said. “He was a good man and inspired me in so many ways.”

Bevil Lucas, a Reclaim the City house leader in Woodstock, remembered Dolophini as a courageous leader. “He was one of kind. He was fearless,” said Lucas. “What was important to him was the movement. He could mobilise the people.”

Lucas said Dolophini’s death came at a pivotal time for RTC as the movement begins to formalise itself as a resistance organisation. “We lost him at a very difficult time in the movement because we are working on building the constitution of the movement,” Lucas said. “To have lost Rasta at this point is a very hard blow for us.”

Lucas spoke of RTC’s continued fight for public housing developments in Cape Town’s city centre. Amidst applauds from the crowd, he demanded that police and government officials respond to the movement’s requests for better policing and adequate housing for the city’s black workers.

“We serve notice today: we are here to tell you it’s time. We, the black people who live in Sea Point and Green Point, are not going anywhere,” Bevil said. “We want our houses here. We clean your houses. We give your dogs food, but we have no place. Enough is enough. We are not going anywhere. You will find the houses for us.”

While Dolophini’s loss has sent a wave of sadness through the movement, Bevil said his memory continued to inspire the activists to fight for affordable housing. “When we look back at Comrade Rasta we can see a comrade who gave his life for us,” Bevil told the crowd.

A press release from RTC, distributed on 21 March, said Dolophini’s death was not an isolated violent event but rather the culmination of months of ongoing intimidation on those occupying Helen Bowden by “opportunists, thugs and members of political parties with ulterior agendas”.

The press release also mentioned instances of police harassment experienced by RTC leadership. “Our leaders have been dragged out of their rooms in the middle of the night by Sea Point police and arrested again and again on spurious charges.”

Before the ceremony concluded Nkosikhona Swaartbooi of Ndifuna Ukwazi read a formal list of RTC’s demands. He called on the police to stop harassing residents of the home and members of the movement; and for cases filed by residents to be responded to fairly and timely. He also demanded increased police presence and visibility in the surrounding area; and for a thorough investigation into Dolophini’s death.

Colonel Maehla Lento, the Sea Point police station commander, accepted the demands and said the police wanted to work alongside members of RTC to ensure safety was restored at the home. “We are here to serve the community at any cost,” he said.

Gqoboka, Dolophini’s fiancé, said she was trying to be brave, but she was very sad and broken. “We had many plans for our future. We couldn’t wait for the day we would sit in front of our house, with our children and one day our grandchildren. I’m so proud of him and always will be.”

A 41-year-old suspect was arrested following Dolophini’s murder but was released in the following days. RTC leadership and Dolophini’s family members now continue to wait on the police to conduct a thorough investigation into his death.