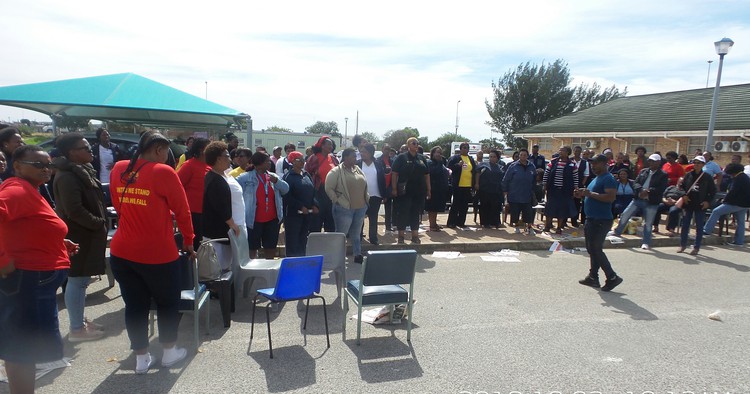 Medical staff at Motherwell Clinic say the clinic is not safe for staff or patients. Photo: Joseph Chirume

About eighty medical staff at Motherwell Community Health Centre in Port Elizabeth entered the second day of a sit-in strike on Thursday.

They are members of various trade unions under the umbrella name Combined Labour. On Thursday they gathered in the clinic yard where shop stewards addressed them and then called clinic management to tell them their grievances.

This is the second strike since June when workers protested about security at the facility after several assaults on nurses at the clinic.

“We are tired of our members being assaulted and scolded by members of the public. Seven nurses have been beaten at this health centre since November last year. On 19 September two nursing staff and a general worker were assaulted while the department is not improving security inside the clinic,” said shop steward Nomonde Fanele.

“The Department of Health is crippled and there’s too much corruption. We demand the premier, MEC, and the Superintendent General come here and see the state of the clinics in Motherwell,” said Fanele.

Another shop steward, Lwando Mange, said even management was not safe in the clinic. He said the health department should terminate its contract with the security company at the clinic.

“The guards have failed to discharge their duties of protecting both patients and employees. The guards are always disgruntled because even up to now their company hasn’t paid them their September salaries, “ said Mange.

But health MEC Sindiswa Gomba’s media liaison officer, Judy Ngoloyi, said the workers’ grievances were already being investigated after a recent meeting at the clinic with top officials. A delegation led by the MEC would visit the clinic before the end of next week, she said.