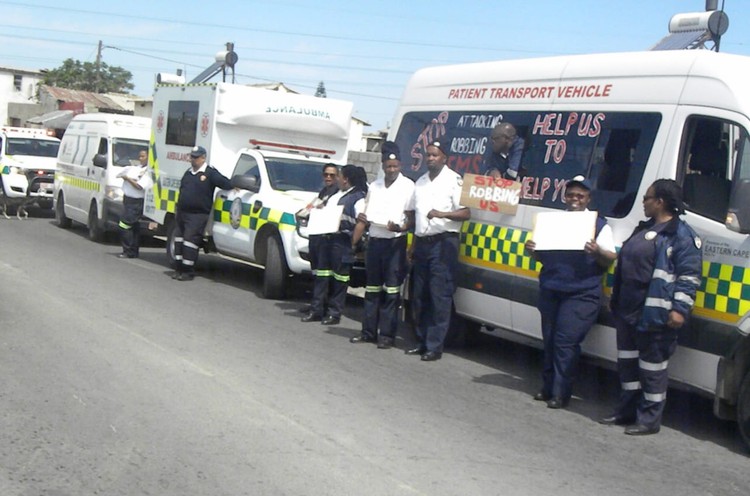 Eastern Cape ambulance drivers and their assistants are servicing Port Elizabeth’s townships again after boycotting them for a week out of fear for their lives.

The drivers demanded police escorts but the police said they were overwhelmed and it was not part of their mandate to escort ambulances.

Emergency Medical Services (EMS) staff are concerned that communities are failing to protect them against criminals while they attend to patients. They have also complained that they have been assaulted by residents when taking long to arrive to emergency scenes.

EMS workers in the past week ran an awareness campaign in townships, educating residents about the importance of ambulances.

Describing measures to be taken, Gomba said EMS staff would carry body cameras on them and emergency vehicles would be fitted with cameras linked to the control room. The control room would be revamped and staff trained to communicate better. Push-to-talk buttons (a cell phone communication system that can communicate simultaneously with many people) would be installed in all vehicles by 18 October.

She also said more ambulances would be added and drivers would be trained in advanced driving to escape from dangerous situations. “We are proposing you carry pepper spray for defensive purposes. Ambulance windows will be protected with shatterprufe glass to deflect thrown objects like bricks and stones.”

Signage on the outside of vehicles would make it clear that no money or valuables are inside.

Gomba also proposed that ward councillor and committee members’ contact details be kept in the control room, so that they could be notified of the presence of ambulances in their areas.

She urged community leaders to educate residents about the importance of ambulances.

A control room operator said she would prefer ambulances to be decentralised to reduce community anger. She said at present ambulances were stationed at Dora Nginza Hospital,far away from places like Motherwell and Ikamvelihle.