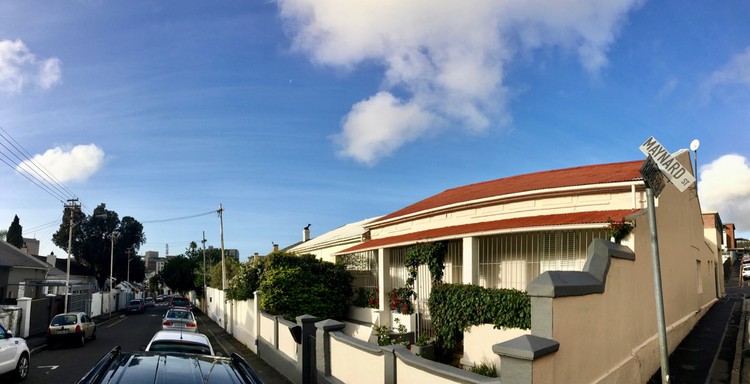 Mayoral committee members Stuart Diamond and Brett Herron excused themselves on Friday from a meeting on Monday scheduled a month ago with anxious residents of Maynard Street. The residents’ questions went unanswered by City officials. Photo: Aidan Jones

When questions about the future of their homes could not be answered, frustration grew among residents of Maynard Street, Cape Town. They had come to a meeting at the Civic Centre on Monday afternoon to get clarity over what will happen to their City-owned houses. But they arrived to find that Councillor Stuart Diamond, the mayoral committee member responsible for assets and facilities management, and Councillor Brett Herron, the mayoral committee member for urban development, were no longer going to attend the meeting.

“They are running away from accountability to the electorate,” said Jerome Izaaks, a community leader and a Maynard Street resident. “This meeting was scheduled more than a month ago.”

Residents are worried that they will lose their homes after the City advertised the properties in 2015 for possible sale.

Izaaks said that the City’s Property Management Department “gave a commitment in April 2016 that the properties will be sold to the existing tenants” and that it would engage with the tenants about this. “These engagements never materialised … Now council appears to want to sell these properties to tenants at market-related prices.”

He said the houses have falling down gutters, mould on the walls, holes in the roofs and become flooded when it rains.

“What has property management [department] done to maintain these properties?” asked Izaaks. “If you are going to ask for a market-related price, surely the property needs to reflect a market-related condition?”

Councillor Suzette Little, who together with subcouncil manager Freddie Prince were the only City officials at the meeting, told the residents, “I cannot answer you, that’s why I was hoping, I was so hoping that they [Herron and Diamond] would be here to give you some responses.”

She said the councillors informed her on Friday that they would not be able to attend the Monday meeting. She chose to inform the residents face to face because she understood how frustrated the residents were.

“The problem is they [the City] don’t have money to maintain our property, so why not sell it to us?” said Hester Louw, 36, who has lived in Maynard Street her whole life. “We don’t want it for free. We will pay for it, but come to us with a reasonable amount.”

Louw, a mother of three and the principal at Woodlands Educare crèche in Parklands, said she lives in a nine-bedroom house with eight family members and pays rent of R10,000 in addition to rates.

“In the beginning those houses were for the poor people. My mom lived in the house next door. I’ve been living in that road since I am 11 years old,” said Susan Oelofse, 41. “You went on a waiting list to get the houses, and you paid like R50 a month rent. Now suddenly they are talking about market-related value, just because the area is now up and coming. But what about us?”

Oelofse is a single mother of five and works at Jan van Riebeeck Primary School for a salary of R5,000 per month. She pays rent of R1,100 per month, and she is behind on her rates bill.

“Whenever I come to a meeting and I come home, my children ask me if we are going to get thrown out,” said Oelofse. “Where do I go if they put us out? And where do I get the type of money to buy it? I don’t have family that I can rely on. I’ve been doing it on my own since the beginning.”

Little said, “I don’t think that we must sit around the table for much longer debating a question that I can’t answer for you. But I most certainly am going to request that you please send me the questions so that I can get you proper answers and responses. I am hoping that those questions will be answered at the next meeting.”

The meeting on Monday was a follow-up to a visit by Little to the Maynard Street properties on 19 April.