Mayhem in Hangberg after Deputy Minister of Police cancels imbizo 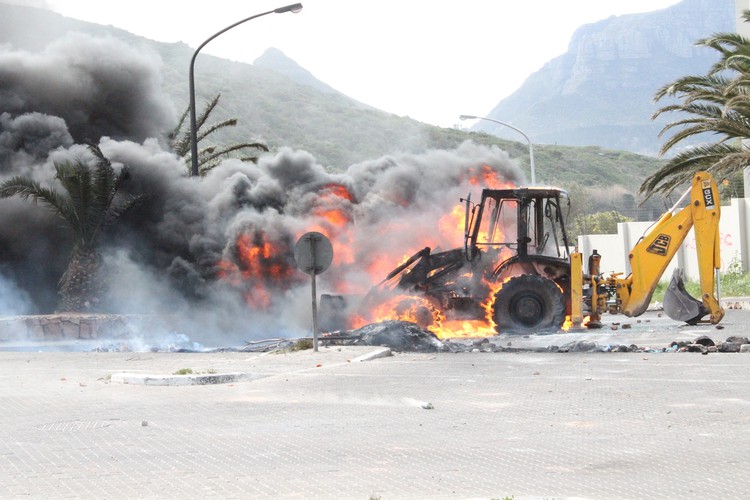 Violence continued in Hangberg on Thursday, as dozens of residents protested over the allocation of fishing quotas.

The Deputy Minister of Police Bongani Mkongi had agreed to an imbizo with the community, but the meeting was cancelled. No public reason has been given for the cancellation, and this article was written after work hours so GroundUp has not yet been able to ask for comment from the minister. After hearing of the cancellation, protesters set a construction vehicle alight. Some protesters said that they would continue burning things until they were addressed by a minister.

As the situation escalated, protesters taunted police with stones, while the police responded with teargas. Tyres were set alight and petrol bombs were lobbed at the police. Crowds of residents from Hangberg stood outside their homes, watching the chaos unfold.

After about two hours the construction vehicle had been almost completely stripped for scrap metal.

One woman said that the protest was about more than fishing rights, and that there was also an issue with land in the area and that they wanted proper houses to be built.

Another man said that a portion of land in the area had been bought by a private individual and that the community wanted that land to be used for housing. He was possibly referring to a new housing development opposite Hangberg.

Residents GroundUp spoke to stressed that their protests did not start off violently. They mentioned attempts to get a response from the Deputy Minister of Police and being avoided. They said that they had to resort to violence to invoke a response.