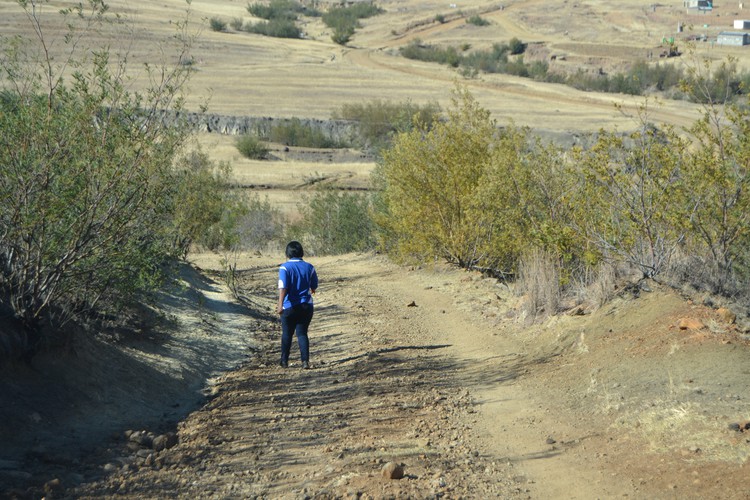 Matatiele residents want gravel roads like this road in Tshitsong to be tarred. Photo: Manqulo Nyakombi.

Gravel roads between Hardenburg and Matatiele were closed with burning tyres and big rocks on Monday by angry Matatiele residents demanding better roads and clean water.

The protesters accuse the authorities of neglecting their town. They demand better roads between Matatiele and the border between South Africa and Lesotho. They also want clean water to be supplied to the villages.

Monday’s protest was the third in a month and protesters vowed to continue until their demands were met. Schools were closed and vehicles taking learners to schools were turned away.

Residents have formed a forum to express their grievances. Chairperson of the forum Nhlahla Ntsoti said Matatiele was at a standstill and this would continue until their demands were met. He said the town had been neglected for years. Residents had tried to hold meetings with Matatiele local municipality but promises had not been kept, he said.

“We are fed up and this time we are not going to stop until we are heard. We demand tarred roads, clean water and better health facilities.”

Ntsoti said women in Matatiele had to wake up at 02:00am to fetch water from the river and this was dangerous.

“With the high rate of women being raped and murdered we are scared that women in our area might be attacked if this issue of water is not addressed.”

He said the gravel roads made it difficult for ambulances to arrive in villages quickly and even police vans struggled to reach some of the villages because of poor road conditions.

“We are voters and we have rights. It is time our government takes us seriously like other towns. We are forgotten here,” he said.

Community member Thapelo Mokoena from Maluti village told GroundUp that if the gravel road between Maluti and the Lesotho border was not fixed, Matatiele would lose business. He said traders who travelled from Lesotho to Matatiele to sell goods had to drive on poor roads.

“We will continue with this fight,” he said.

Matatiele local municipality spokesperson Olwethu Gwanya said the municipality had held several meetings with residents. She said as far as she knew they wanted better roads but that was an issue not for the municipality but for the Department of Public Works.

“We called a meeting between the community and Department of Public Works and we asked for a chance to look into their complaints. It’s clear that the community was not happy, hence they decided to continue with their protest,” she said.