Residents say the land has stood unoccupied for decades 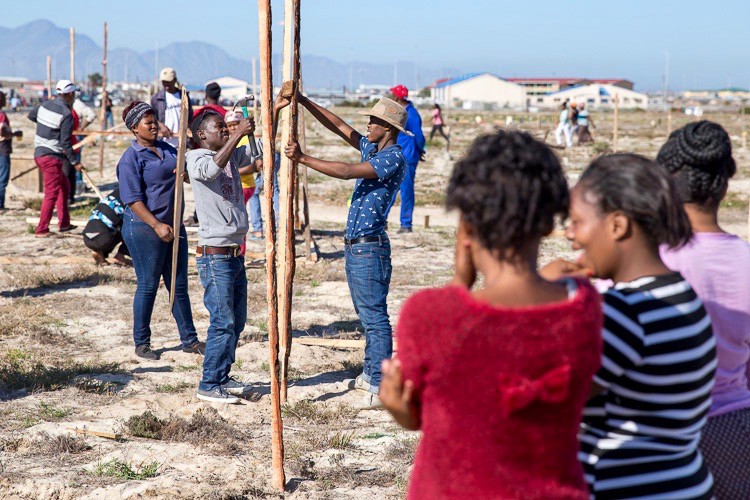 A massive land occupation is underway in Town Two, Khayelitsha, near the Magistrates’ Court with hundreds of sites demarcated on the land. If the occupiers are successful, thousands of people will live on the privately owned land.

The occupiers are backyarders from Town Two who say they are tired of renting and living with their parents, while an enormous piece of land stands empty. All the occupiers that GroundUp spoke to said the land had stood unoccupied since they were children.

“I’m a 42-year-old and I am living in my mother’s house,” said Thuliswa January Tshofela.

“We are sick and tired of backyards and renting,” said Liwa Mdleleni.

Mdleleni said people lived their lives renting houses and yet will never have a title deed to their name. He pointed to flats on the periphery of the open land and said that he was told that flats such as these would be built, but that nothing had happened.

By late morning, a large contingent of law enforcement and police had gathered.

Residents began constructing homes on plots they had demarcated earlier.

Law enforcement and workers in orange T-shirts began knocking down poles that demarcated the sites. The few homes that had been built were demolished.

Like many other residents, Tshofela said that residents in Town Two had to cross this large expanse of open land (about 120,000 square metres, equivalent to 14 rugby fields) to access public transport and it was dangerous because of criminals. Many occupiers said it would be better if they built a settlement on the land.

“I have been married for 16 years. My eldest son is ten, and I still stay at my mother’s house,” said Tshofela. “We are tired. We want this land.”

Bathande Vanqa said that he had lived in Khayelitsha his whole life. “In 2013, government promised that they will give us land and we will build our own houses … We are building our future on this land,” he said.

“We won’t rest until we have built houses. We will fight until the end,” said Vanqa.

The City of Cape Town responded that “the City has removed pegs and partially erected unoccupied structures. Although we empathise with the plight of our residents, we simply cannot allow the invasion of land. Invaded land becomes a fire-, flood and health risk and it makes the provision of basic and emergency services almost impossible in some cases.

Our residents know which channels to follow and we are always open to engagement but we cannot support illegal actions. It will not improve the lives of our vulnerable persons.”