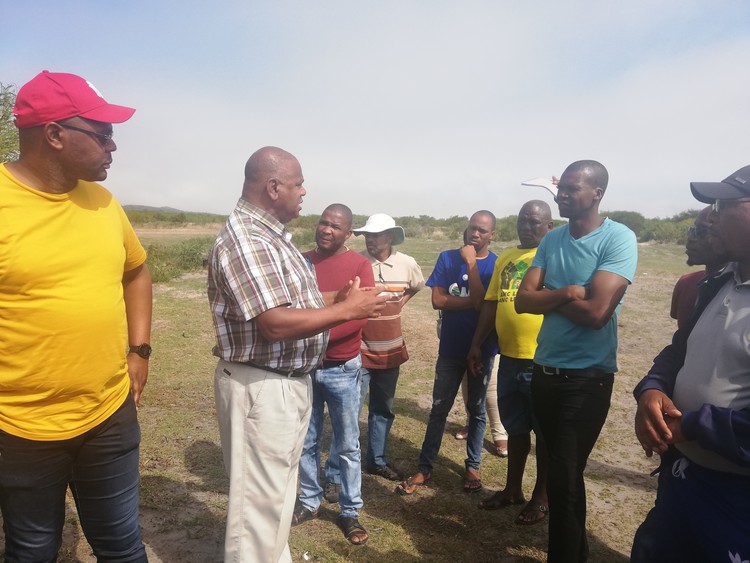 Mayor Dan Plato addresses Masiphumelele community leaders during a tour of Erf 5131. Residents want to know when they can move onto the land. Next to Plato, in yellow, is Mayco Member for Human Settlements Malusi Booi. Photo: Ella Ndongeni

By Ella Ndongeni and GroundUp Staff

Masiphumelele residents have vowed to occupy a vacant City-owned property unless Mayor Dan Plato provides them with exact dates on when they can move onto the land.

This was said at a meeting held at the Masiphumlele community hall on Saturday. Plato, Mayco Member for Human Settlements Malusi Booi, and Mayco Member for Urban Development Felicity Purchase attended the meeting.

The land in question, Erf 5131, was bought by the City from SANParks in 2003, when Nomaindia Mfeketo was mayor. There have been ongoing discussions between residents and the City on its future. Part of the 10.8 hectare (equivalent to 11 rugby fields) land is a sports field, and another part of it will be the upcoming Phase Four housing project. This still leaves a large chunk of it unallocated and unoccupied.

It emerged that although the land belonged to the City, there was no environmental record of the decision to utilise the land. City officials said they were in the process of asking the Department of Environmental affairs to give the go-ahead for developing the land. The process could take a year or two.

Lonwabo Ntwasa, who has been living in a shack in a backyard in Masiphumelele for ten years, told Plato that they were expecting to be told when they could move onto the land. “The City has been holding meetings for years about the same thing. We have had enough of them now,” Ntwasa said.

“This is not the first, second or third time officials have gone to see that land. Every time we are near elections, officials come and see the land and tell us about studies which results we never see.”

Ntwasa and other Masiphumelele residents had attempted to occupy the land in 2017. Residents had demarcated plots and a few built shacks. But these were quickly removed by police.

“Do not come here to lie to us if you want our X’s on ballot papers,” said Ntwasa.

Another resident said she could no longer afford renting and was willing to move onto the land even if there were no services.

Residents called for the City to make the remainder of Erf 5131 available as an emergency relocation area for residents living in the informal settlement on Masiphumelele’s wetlands as well as the township’s backyarders, like Ntwasa. Meeting attendants even said they would be happy to cut down the trees on the land themselves.

Speaking to GroundUp, De Lille denied that she had made promises to the community. “He is talking nonsense,” the former mayor said in response to Plato.

De Lille said that she had in fact written to the provincial government, asking it to revoke its decision to protect the land for environmental purposes. She expressed doubt that it should take a year or two to complete the environmental impact assessment.

Plato warned that people who took part in an occupation of the site would “never see your brick and mortar houses”.

Booi said they would come back to the community on 27 March to present a plan.