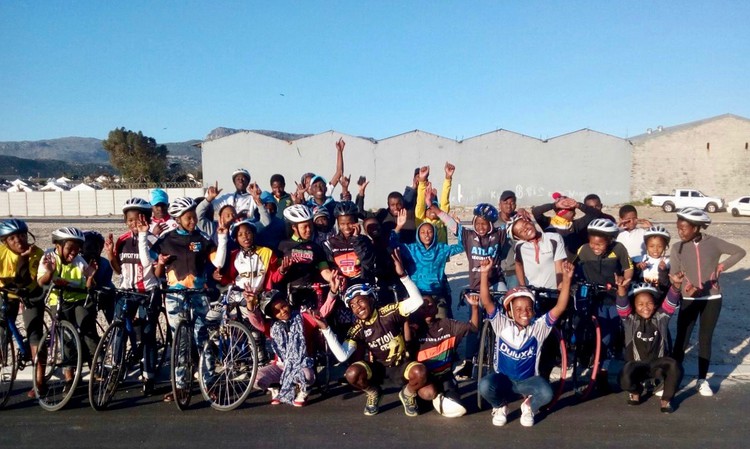 Songezo Jim and members of his cycling academy in Masiphumelele are looking forward to the Cape Town Cycle Tour on Sunday. Photo: Thembela Ntongana

Sixteen young cyclists from Masiphumelele will be taking part in this weekend’s Cape Town Cycle Tour. They are all enrolled at Songezo Jim’s cycling academy, which Jim has been running for two years in Masiphumelele.

Jim started cycling in 2005 when he was still at high school. At the time, cycling wasn’t taken seriously in the townships.

“It was when I started travelling and taking part in races that I saw that it could be something that I could make a living out of,” Jim told GroundUp.

He started participating in races around Cape Town, then other provinces, and four years later he had the opportunity to go to Europe as a spectator at the Tour de France.

“That trip became an eye-opener … I told myself I want to be a professional as well and be part of the race one day,” said Jim.

Jim has participated in numerous international races and grand tours. He came sixth in the African Continental Championship in 2012. He was elected best combative rider and came fourth at the Ninth Tropicale Amissa Bongo 2014 (Tour du Gabon).

“I have done some of the big events in the world – Giro d’Italia (2016) and Vuelta a Espana (2015) … The things I have done are beyond what I had imagined for myself when I started,” said Jim.

Songezo’s cycling academy started with 35 students aged between ten and 23. They train six times a week from Tuesday to Sunday for two hours. He started with 15 bicycles using funds he raised in the Netherlands. He now has 30 bicycles.

“Cycling is an expensive sport, from buying the equipment to servicing. The ones [bicycles] we already have we can’t afford to buy parts to fix them,” said Jim. “We are currently without a sponsor and it is very hard for us to even attend most races because we do not have the money.”

Jim said he would like to see more young women join the academy. Currently there are five.

One of the academy’s most promising cyclists is 14-year-old Vuyani Sebonyana, one of the first to join. He has done well in the eight competitions he has participated in.

“I had never considered cycling as something I would be interested in, but now it is something I want to do for the rest of my life,” said Sebonyana.

His father said that as much as he was a soccer player, he was happy that his son had chosen something different. “Cycling teaches him discipline. Living in a community where children his age are on drugs and [into] crime I am happy that he has something to do after school and then comes back home.”

Sebonyana and his mates are looking forward to taking part in Sunday’s Cape Town Cycle Tour.