Meeting between City officials and residents started and ended chaotically 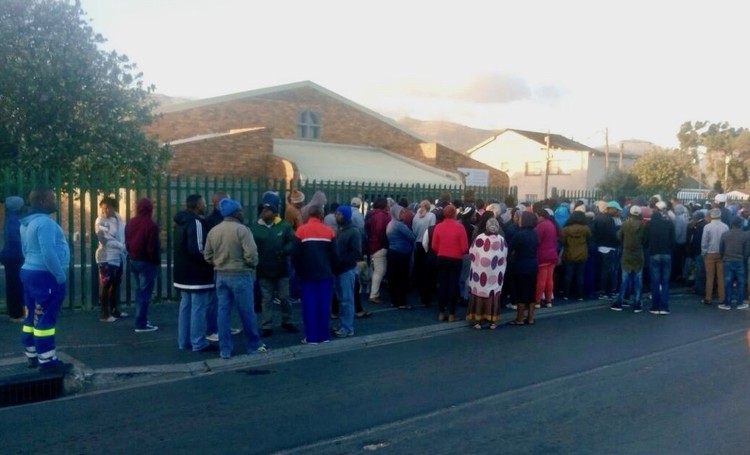 Masiphumelele residents wait outside the community hall for a meeting with City officials on Monday night. Photo: Thembela Ntongana

On Monday night, more than 1,000 Masiphumelele residents filled the community hall hoping to get permission from Xanthea Limberg, the City’s Mayoral Committee Member for Informal Settlements, to build shacks on land next to the Phase 4 housing project.

The land, bought by the City in 2003 under former Cape Town Mayor Nomaindia Mfeketho, has stood vacant all these years. Part of the land is a sports field.

Limberg was accompanied by controversial appointee Loyiso Nkohla, who is serving as an advisor, as well as Emma Powell from the human settlements department.

The meeting started 40 minutes late because the hall was locked. An official from the City went to fetch ward councillor Felicity Purchase, who had the key. People sang while they waited outside.

Once residents had entered the hall, they refused to start the meeting until Purchase left. Residents said they had agreed beforehand with the City that Councillor Purchase would not be in attendance.

Nkohla told the chair of the meeting, Tshepo Moletsana, that Purchase had every right to be there as the ward councillor. Purchase refused to leave and remained for the rest of the meeting.

“Let us [then] treat her like the doll that she is, a doll that cannot speak. We will not hear a word from her in this meeting,” said Moletsana.

Community leader Lunga Mathambo said, “In Masiphumelele, we do not have a councillor. She [Purchase] has continued to disrespect us and therefore we do not recognise her as a community. She should never set her foot in Masiphumelele [again]. If she comes, hell will break loose.”

Limberg began by saying she had only been in her current position for four weeks. “I am trying to get the gist and the history of this community; forgive me if I do not know,” she said.

She apologised for not attending a site visit as promised earlier in the week, because she had had to attend an important meeting. But later, Powell told residents the reason the officials had not visited the site was that they did not have all the information they needed.

Limberg said the City wanted to develop a task team for Masiphumelele and establish a memorandum of understanding with the residents.

Mthambo said, “This is the same feedback that we got on Thursday in the meeting.” He said the City only asked for this meeting because it feared an imminent land occupation.

Limberg said the City had to first do an Environmental Impact Assessment (EIA) on the vacant land, which would take up to three years.

She was then interrupted by residents. One asked Nkohla if he had waited three years when he threw the poo in the infamous poo protests [of 2013].

Mathambo said the EIA had been done in 2006 and a sports field built afterwards.

He said Powell had promised to send the community various documents regarding the land issue and had not done so.

Powell addressed the crowd and said that residents were playing “cheap politics”.

A resident replied, “You can not tell us about cheap politics when the ward councillor has been using that tactic for years for not providing services to black people because they do not vote for her.”

Residents stood up and spoke one after another, saying it was clear they would not get answers from the City at this meeting.

Nkohla threatened to leave with the other officials if the community did not listen.

Some residents then switched off the lights and the hall was plunged into darkness. Some residents blocked the doors. Moletsana and other community leaders asked for the doors to be opened. City officials were allowed to leave.