Amani Pula had dreams of becoming a soccer player 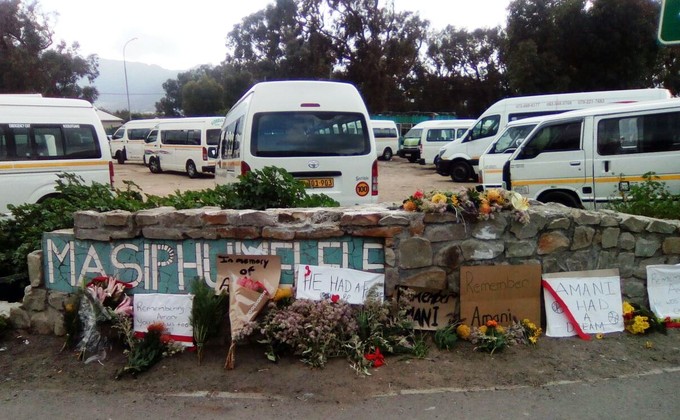 Residents and neighbours of Masiphumelele held a vigil to mark a year since Amani Pula was murdered. Photo: Thembela Ntongana

Today, residents and classmates of Amani Pula held a memorial at the entrance to Masiphumelele. Pula was raped and murdered exactly a year ago while waiting at home for transport to take him to school.

His uncle, who was returning from night shift, found Pula’s body. His hands were tied behind his back.

Pula was 14-years-old and an only child, with dreams of becoming a soccer player. After his murder, his mother moved out of the community.

His death sparked weeks of protests in Masiphumelele with residents demanding more police and a drug free community. During the unrest, several people died in alleged mob justice killings.

From six in the morning today, residents gathered for prayer, then walked up Kommetjie Road to the entrance of Masiphumele, holding placards and red ribbons.

People from neighbouring communities also brought flowers, dropping them on their way past Masiphumelele on their morning commute.

Classmates from Imhoff Waldorff High School took time out of their school day to remember Pula. “We will never forget him,” said a student.

Community member Nozi Mbozo said 15 September was a sad day in the community. “We lost an innocent child who did not deserve what happened to him. We can’t bring him back, but we will always remember and celebrate the life he lived,” said Mbozo.

The paramedic who was the first to respond to the scene and had declared Pula dead couldn’t control her tears as the memory of the incident overwhelmed her.

Community leader, Lubabalo Vellem, who had wanted to attend the memorial service and is accused of a mob justice killing during the unrest that followed Pula’s murder, was unable to attend because of his bail conditions.