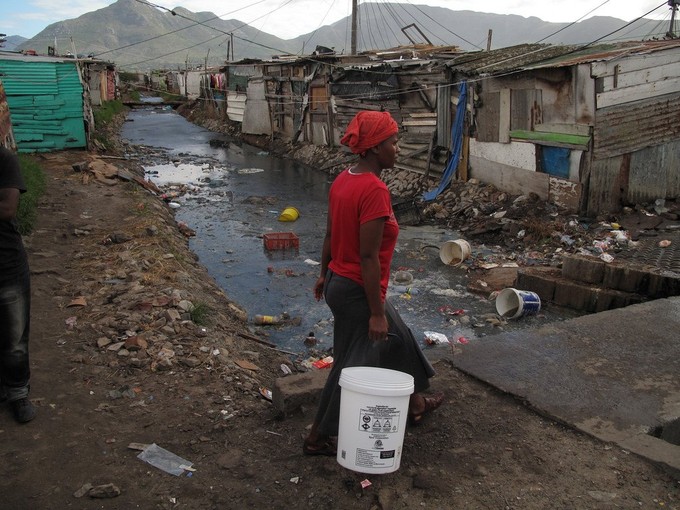 Residents of Masiphumelele want the R4 million the City of Cape Town is spending on a fence to rather be spent fixing canals like this running through the township. Photo: Masixole Feni

The City of Cape Town plans to build a fence in the Masiphumelele wetlands area at an estimated cost of R4 million. This is on the same land where some of the victims from the fire in November, that left 4,000 people homeless, rebuilt their shacks after there was no more space in the fire-affected area. (The shacks have since been removed.)

Chairperson of the Masiphumelele’s Wetlands Area Committee, Brian Lubabalo Nompunga, says the first residents heard of the fence was via Echo community newspaper.

“It was when we read it in the Echo that we decided to get together as community leaders and seek answers from the City. None of us were aware of this,” he said.

Community leaders have signed a protest letter saying that they are not against protecting the wetlands. However, they said they would be happy if the informal settlement in Masiphumelele would be made safe and clean with basic services, so that no pollution of the wetlands would happen any more.

The community leaders say that the proposed fence is the opposite of a solution.

The letter identifies residents’ major concerns for the informal settlement: (1) the four canals dividing section A to F where at present human waste is dumped due to lack of toilets, (2) the ongoing disasters that include fires and floods that have negative effects on nature and human lives, (3) overcrowding, and (4) the 32 families still living at the community hall after they were displaced from last year’s fire.

The letter states that their strongest objection to the fence is the increased danger to lives once the fence is built. “When there is a fire people run for safety,” the letter reads. It also says that the fence is in the way of where people would put their belongings in the case of fire.

“[W]hat will this mean for these people now? They will have nowhere to run. Those close to the fence will not be able to save their things in case of fire. They will be lucky to save their lives,” the letter states.

Nompunga said, “They are spending so much money on building a fence which could have been used to better the living conditions of the people living in the wetlands informal settlement. We have a shortage of toilets. The ones that are working are in a bad condition. This money could be used to develop the settlement.”

City of Cape Town’s Mayoral Committee Member for Human Settlements Benedicta van Minnen says it was the Western Cape Government’s Department of Environmental Affairs and Development Planning who directed the City of Cape Town to erect the fence.

She adds that the proposed fence is a measure to prevent residents from moving deeper into the wetlands in search of space and to protect residents from the extreme winter-flooding that will occur.

“Currently the remaining wetland areas around these sites are dry, which is enticing the erection of structures but this cannot be allowed. Because the area is flood-prone. It will be disastrous for these residents when the rains come,” she said.

When asked about the people sheltering in the community hall who might potentially benefit from living on some of the land that will be enclosed, Van Minnen responded that the City has made all efforts to accommodate them but has to contend with community demands and conflict preventing the hall residents from being accommodated.

In a response to the community leaders’ letter, van Minnen wrote a reply in the Cape Times on Tuesday 5 April stating that the remaining 32 people currently at the hall were not fire victims and that the efforts by the City to accommodate them has been stifled by the Houmoed Road Community who do not want to live in the same area or platform as the victims.

But a person sheltering at the Masiphumelele community hall, Bongani Babiso, says he does not understand why van Minnen says they are not fire victims.

And community leader Tshepo Moletsana said he was unaware of the existence of the Houmoed Road community and that van Minnen’s response is unhelpful. “On Tuesday we had a meeting as the Far South Peninsula Forum and discussed what she said. There is no such community – that is a road with industrial factories. She is talking about an area that she knows nothing about.”

He said that he understands that the City needs to protect the land from occupations but said that there must surely be a cheaper way of doing so.